It’s a funny thing triathlon training – in some ways it’s a science, in others it’s an art, but whichever way you look at it, training for a triathlon is always a continually evolving experiment.

Sometimes the experiment works, everything comes together just at the right time and you peak for the race of your life. You might think that after a good year – such as the one I had last year – you could simply check back through you training diary (you are I hope keeping a training diary aren’t you?) and simply rinse and repeat. It worked last year so it should work again right?

Unfortunately it isn’t that simple, things change and training plans a need to evolve accordingly. Your race plans may be different, your goals will change, the weather will affect training in different ways this year than it did last, family, work and other life commitments may transform your ability to train. These external factors may have positive effects on your training and performance, others may be negative. The constant changes mean that every training plan needs to evolve with these changes and it therefore becomes and ever evolving experiment.

Besides, if it all went so well last year then hopefully you too have evolved as an athlete. Simply doing the same again will no longer apply the same training stresses as you are no longer the same athlete. You may well be fitter and stronger than you were and therefore able to absorb more training, doing the same as last year will only see you plateau.

Of course, applying more training stress will in itself be an experiment. It might work and you might go on to even greater heights. You might overdo things though and end up going downhill. Not all experiments have a good outcome after all.

The best athletes are those that are completely in tune with their bodies and intuitively know when to go hard and when to take it easy, when to apply more training stress and when to back off. They know their strengths and weaknesses and know just what to do and when to do it in order to extract the most from themselves.

The best coaches in the world are similarly able to read their athletes like a book in order to push them as far as they can, but never too far. Some coaches use scientific data for this, others pick up on physical and emotional signals from their athletes but however they do it they help them make the best of what they’ve got.

It’s all still an experiment though, an experiment with ever evolving inputs and always with a scope of n=1 as no two athletes are ever the same.

Sometimes it works, sometimes it doesn’t. At the moment it feels as though the latter is true. It doesn’t matter what I do, I just seem to be getting slower.

My FTP is dropping on the bike. Today I couldn’t get anywhere near finishing my 4×6 minute efforts at 108% FTP. I blew up towards the end of the 2nd interval and couldn’t even hit the target power output at the beginning of the 3rd so had to give up on the session completely. 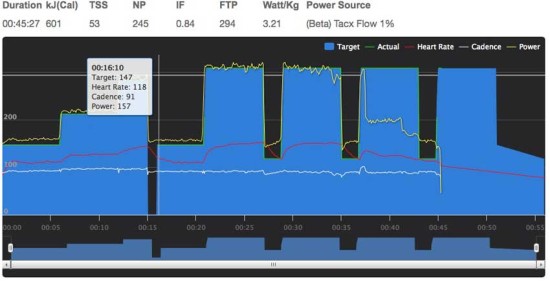 I don’t seem to be improving in the swim despite putting in quite a bit of time in the pool with 4 swim sessions a week. Most sessions are longer than they used to be as well.

My running doesn’t seem to be going anywhere either. Some days it’s OK, others it is terrible.

None of this is helped by the fact that I don’t seem to be able to shed any of the excess weight I gained over Christmas. I’m eating fairly healthily, I’m always hungry though and I’m still feeling fat.

The experiment continues though and I’m hoping the lack lustre performance is in part due to a succession of long days due to other commitments. Early mornings and late nights all take their toll even if I am sleeping fairly well when I am in bed.

Maybe I just need to remind myself that it is supposed to be difficult and that there will be times when it is tough and I feel below par. It’s all part of the experiment and hopefully I’ll bounce back fitter and faster than ever. It had better happen soon though as I’m heading in the wrong direction at the moment.

The results of the experiment will speak for themselves I suppose once the first races of the season roll around.