This is Parkin.  He’s not our cat but he has been hanging around our house for quite a while.  He’s always very timid and just looks like he would like a decent meal so we started feeding him alongside Robbie (our cat) whenever he turned up. 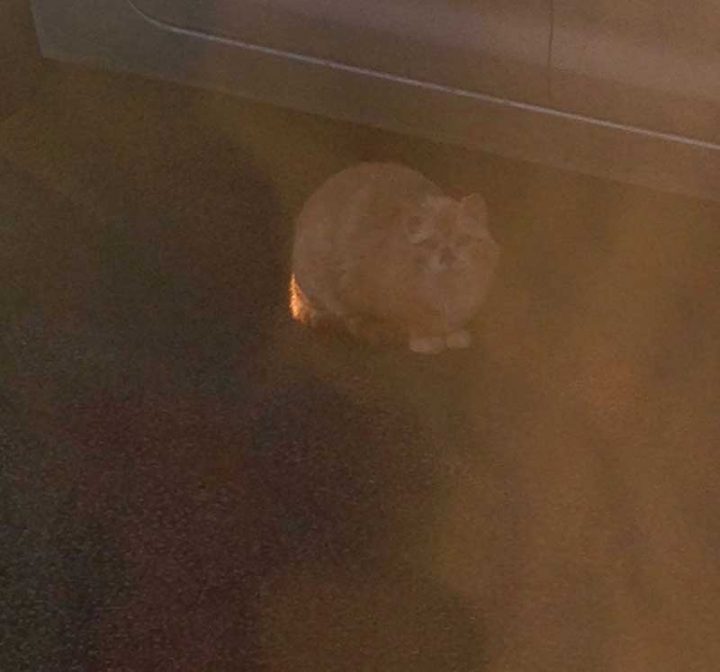 Recently we hadn’t seen him for a while and then he turned up looking much the worse for wear with a nasty limp.  I couldn’t just leave him so after some advice from the RSPCA and the Cats Protection League we borrowed a cat trap and put together a plan to catch him and sort him out.

This wasn’t going to be easy.  He clearly didn’t like people at all and never got closer than a couple of car lengths away.  We did have a cat trap but given the number of seagulls etc that have got used to us feeding the cat outside I was a little concerned we might catch a seagull instead and I hate to think what would happen if I got up one morning and had to deal with a cross seagull in a cat trap!

We decided to give it a go so one night after Robbie was safely inside – we didn’t want to catch our own cat- we set up the trap.  First thing in the morning (before Robbie went out, so about 5am) I got up to check the trap and much to my surprise we had caught a Parkin!  He certainly wasn’t happy and it had been raining so he was cross and wet and VERY scared.  Every time we got close to the trap he’d try to get out and bash himself up against the side so once he was covered over with a towel and out of the rain we left him alone as much as possible until we could get him to the vet.

The trip to the vets was uneventful.  We managed to avoid and cat wee in the car which is always a good thing.  The vet however had been called out to an emergency calving so I had a long wait ahead of me for him to arrive.  Cats Protection had said they would cover vet bills etc but this did come with a caveat.  Their rules state that any strays have to be tested for feline HIV and if the result is positive then they have to put the cat to sleep.  As the vet explained a cat can live a pretty good and long life with little risk to other cats with the virus so if we were happy to cover the treatment costs we wouldn’t have to have the test.   Morgan was also adamant that he would rather pay for the treatment than let them put Parkin to sleep so that’s the option we went with.  The vet took one look in the cage and decided he would need to sedate Parkin to get a good look – and while he was at it why didn’t he castrate him!  This seemed a little severe given that poor Parkin only had a sore leg but he was clearly a stray with a scraggy coat and mangy ears so we went with the vets advice.  Hopefully this will stop him getting in to more fights and injuring himself again.

So a few hours later and sleepy, wormed, fleaed and castrated Parkin was ready to go home under strict instructions to be kept in until the morning.  This was easier said than done and as soon as we were home Parkin decided he would do all he could to try and escape the cat box he was in.  He did settle eventually and I managed to give him some food but by 3am he’d had enough and was on an escape mission again.  We decided 3am counted as the following morning so opened up his box to let him go.  As soon as I walked away he made his break for freedom and moved faster than any cat I’ve ever seen.

And that was it – we didn’t see him again…..for about a week and then he turned up one night for his dinner.  He looked so much better.  His coat and ears looked healthier but he was very wary of us… .and who can blame him! 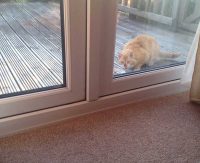 We saw him for a few nights then but since the recent warm weather there has been no sign. I’m hoping a plentiful supply of baby mice and rabbits is keeping him busy and he turns up again when he’s hungry.