Running the Length of the Leri – From Source to Sea

I couldn’t continue with my Wales Coast Path run today, so instead I created an adventure of a different type and decided to try running the length of the River Leri from source to sea. 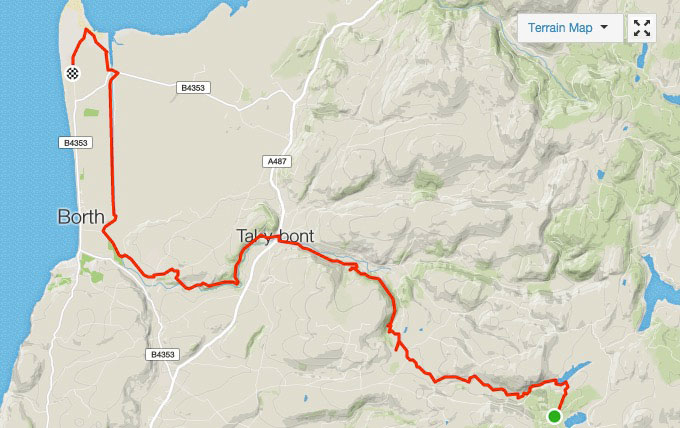 River Leri from Source to Sea

A Change of Plan

My usual plan of a turbo trainer session followed by a Coast Path run had to change today. My parents were here for the weekend and we had planned to head north towards Harlech so that I could run from Talybont to Harlech along the coast path and then met them in Harlech for some sightseeing and a visit to the castle. The weather was awful though, strong winds and pouring with rain all day long. On top of that my Dad wasn’t feeling great so that little expedition was called off.

Hard work on the Turbo Trainer

I did start the day with an early morning session on the turbo trainer as planned. My schedule had me doing a TrainerRoad session called Leconte. A brutal looking workout that consists of 3 sets of 2×10-minute criss-cross intervals where 2-minute valleys between 95-99% FTP alternate with 30-second surges between 105-110% FTP. Each interval criss-crosses your FTP never straying far from it until the brief, 1-minute recoveries within each set or the 5-minute recovery segments between sets. 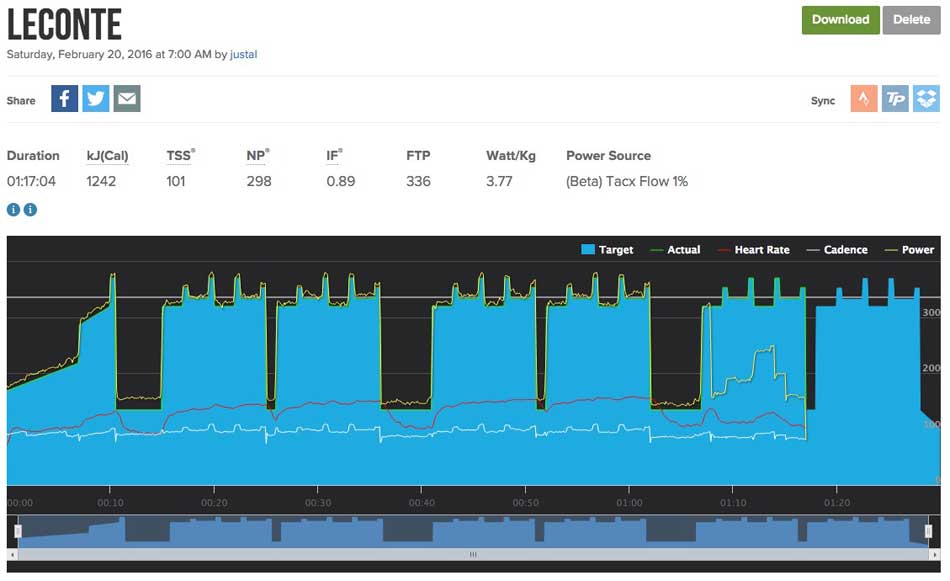 I didn’t feel as though I’d be up for finishing it and that was indeed the case. My right knee was hurting and that was all the excuse I needed to bail out of it after the 2nd set of 2×10 minute criss-crosses. It was still quite a tough workout though even without the final set.

I then had a breakfast of porridge with mixed fruit and honey. I then found out that we weren’t going to Harlech so it was followed by a second breakfast of granola and yoghurt. This was  followed by a third breakfast of a granola flapjack and another cup of coffee and finally a fourth breakfast of waffle and syrup. This is what happens if I’m not doing anything or don’t have an adventure planned, I just eat instead. So, I started formulating an adventure of a different type.

I did contemplate running along some trails or even sections of the coast path nearer to home, but then came up with the idea of running all the way along the River Leri from the source high in the hills above Bont Goch, to the sea here in Ynyslas. I quickly checked the map, estimated the distance at around 13 miles and decided that it was do-able. I checked the weather – it was still horrible out there, but I couldn’t let that stop me so I got changed into my running kit and then drove off into the hills along with Anna who would drive the car home for me.

We drove all the way up to Pendam and then along a bit of fireroad into the middle of nowhere. The mist, murk and rain was atrocious on the way up and it certainly wasn’t looking inviting when we got there. Doing my best to ignore the conditions I put my hat and gloves on, said goodbye to Anna and headed off up towards Llyn Craig-y-Pistyll, which is the source of the River Leri. It’s also the source of our drinking water I think.

The River Leri – From Source to Sea

As I crested the hill and turned towards the lake the wind hit me and the driving rain stung my face. I could barely see where I was going through the mist but soon found the banks of the lake in front of me and made my way around the southwestern corner of the lake to the dam at the end. The lake itself was choppy, covered in long strands of white from the windblown chop that contrasted with the grey, cold of the water. I hadn’t been up here for ages and love the way that the water spills over the weird zig-zag labyrinth spillway here. I should have stopped to take photos, but it was a bleak as bleak can be here today and I was out in the middle of nowhere in terrible weather conditions wearing just some flimsy running kit so didn’t want to hang around for long. I did of course have some ‘survival’ kit in my rucksack, but would prefer not to have to use it if I could help it so kept moving in order to stay warm.

Here’s a photo of the interesting Labyrinth Spillway from http://www.geograph.org.uk/ taken on a much nicer day. 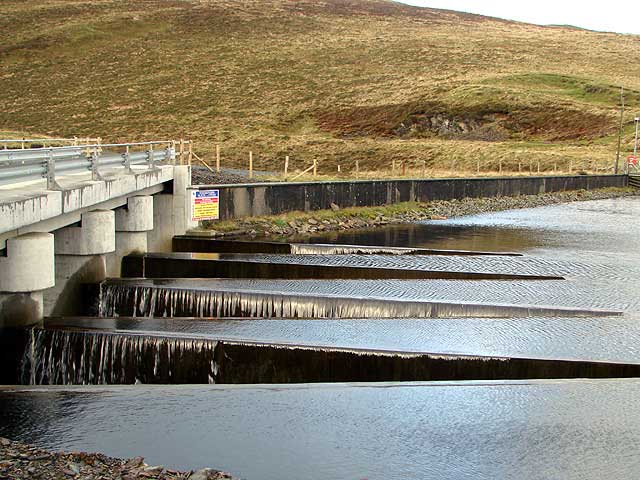 Labyrinth Spillway. © Copyright No Longer Contributing and licensed for reuse under this Creative Commons Licence

I crossed the dam and made my way onto a narrow little track that clings precariously to the gorge on the northern side of the River Leri. The path itself was slippery, muddy and narrow and with the wind buffeting me and doing it’s best to blow me over and plenty of trip hazards in the form of gorse roots littering the path I had to keep my wits about me. I was feeling quite exposed up here. There was no one else for miles around, the weather was getting worse, I could barely see and the path itself was fairly treacherous in these conditions so I took it easy and kept my concentration high.

After a while the path widening and the terrain levelled out a bit as I passed a couple of little footbridges and then made my way onto a muddy double track through the hills. This passed through some old mines and then some old farm buildings and eventually through a farm that was inhabited. I continued on my way still following the banks of  the River Leri closely and eventually emerged onto the road through Bont Goch. I followed the road for a little way up the hill but then headed off back down to another little footbridge across the Leri and onto the muddy track that contours along the valley between Bont Goch and Talybont. Having crossed the river I was now following the southern banks of the Leri. I hadn’t lost sight of the river yet since leaving Llyn Craig-y-Pistyll.

In Talybont, the only significant place of human habitation that the Leri encounters on it’s journey to the sea, I crossed the main road and headed off into Talybont Woods. The River Leri is joined by the waters of the Ceulan here, where the waters once powered a woollen mill. I was now on much more familiar trails and did lose sight of the river once or twice, but continued to follow its course closely. My knee that had been sore on the turbo trainer earlier was still quite sore so I started making plans to give Anna a ring once I got to Borth. Borth may not be where the River Leri flows into the sea, but I would have at least made it from source to the sea, even if I didn’t make it all the way to Ynyslas.

From Talybont Woods I made my way across country through yet more mud and muck to Dolybont and then down towards Borth. Once I got as far as Borth, I only had a few miles to go so continued to plod on rather than give Anna a ring. I was now right on the banks of the Leri once again and crossed the river on the footbridge at Ynysfergi before the long slog all the way along the Leri behind Borth, right to the far end at Ynyslas. Here I crossed the river on the railway bridge and then crossed it one final time on the road bridge before heading off behind the boatyard all the way to estuary where the River Leri finally spills out into the River Dyfi and the sea. I continued on home from here making the whole run just over 15 miles in length.

It hadn’t been a fast run by any stretch of the imagination and I was quite tired by the end of it. The weather hadn’t helped and nor had the terrain, but at least it had been almost all downhill. At home I was greeted by the smell of beef stew. Anna had been busy in the kitchen cooking soups for lunch and had a delicious beef and ale stew bubbling away in the slow cooker. Just what you need after a wet winters day in the Welsh hills. A relaxing bath and some yoghurt and granola soon perked me up and then we settled down on the sofa to watch a film before devouring the stew.

I might not have been able to make any progress with my Coast Path project today, but my own little adventure running the length of the River Leri from source to sea had been quite a challenge. It had been good fun and it feels as though I’ve accomplished something. I’ve also found a couple of new bridges crossing the River Leri that I didn’t know about so will have to head up there again soon to hide some new Leri River Crossing Geocaches.

The River Leri may not be the longest of rivers, in fact it’s very short, but it’s there and I’ve now ran along it’s entire length. It’s actually quite a nice river to follow as the paths hug it’s route closely and they never stray far from its banks. It’s just a shame the weather was quite so bad.