Day two of the workmen working on our new drive and yet again we were all out of the house early for work and didn’t return until they had left. No tea and cakes for the workmen from us, but they seem to be getting on well with the job.

After the removal of lots of sand to get things down to the level of the road yesterday, the main task today was to fill the area back up again, this time with a nice thick layer of hardcore. once this had been delivered and spread around the drive area they set to it with a whacker to bed it all in and then took delivery of some kerb stones, some cement for fixing these in place and a nice big pile of finer gravel that will be spread out over the top of the hardcore to level it all out. 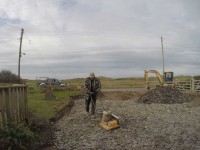 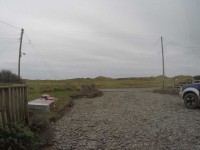 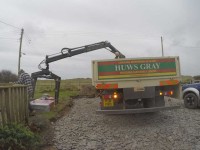 Once again I had my GoPro recording in timelapse mode taking a photo every 30 seconds which works out at around 1300 photos over the course of the day. I trim some of these out as not much happens at the beginning and the end of the day and I trimmed some out from the middle as well where there wasn’t much going on. This still leaves over 1000 photos that I import into iMovie to make a video. I set it up so that each photo is displayed for 0.1 seconds and make sure that there are no Ken Burns effects applied to them (iMovie tends to apply this as default to still images). I did find however that iMovie had some issues with this and slowed down once I started adding soundclips, music, titles and such like. It worked, but scrolling around in the timeline which contained 1200 photos was slow and resulted in a fair few spinning beachballs whilst editing the footage from Day 1 of our New Drive.

I therefore tried a different technique today. After importing the photos and setting up the duration of each to be 0.1 seconds I exported that as a video. I then started a new project within iMovie and imported this video into it. Now, rather than working on a timeline that contained 1200 individual photos, I was working on a timeline that contained just a single video file. Things zipped along now and I was able to edit it, add titles, music and sound effects in no time at all without any spinning beachballs. Certainly a technique to remember when editing timelapse footage in the future.

If you watch to the very end, you even see us turn up very briefly and make a quick inspection as dusk falls. The following day was very wet and although the guy who was due to lay the kerbstones did turn up, he couldn’t do anything as the ground was soaking wet and the edges where he was supposed to be cementing in the kerbstones were full of water. So this is how things were looking early in the morning of what would be Day 3 of work on our new drive. 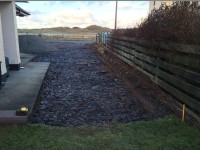 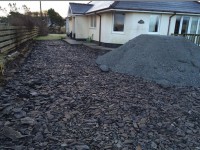 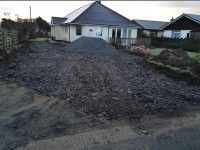