I’ve got a thing about jackets. I can’t resist them and Anna seems to think that I have far too many. In my defence, I am outside doing various activities in all sorts of weather. Each activity has different requirements for a jacket as does each weather condition. So, if you put together all of the combinations of running, cycling, mountain biking, cyclocross, walking, kayaking and day to day use along with heavy rain, rain, drizzle, torrential rain, mizzle, showers, below freezing, freezing, cool, warm, breezy, not to mention any of the other types of weather that Wales is known for then I don’t have nearly enough jackets to cater for all eventualities!

On top of that I have to make sure that I have enough for consecutive days use whilst keeping on top of laundering them too. I have recently had to buy three new jackets. The OMM Kamleika Race II Jacket was one of these. The others were a Rivello Garsdale shower-proof and breathable softshell cycling jacket and a Kilpi Svalbard down jacket.

Anna will be pleased to hear that I’ll be retiring my old Gill eVent jacket as a result of this latest purchase. The Gill had served me well first as a cycling jacket, then as a windproof top for kayaking. However, after many years service the zip had corroded and wasn’t working so it’s probably time to give it a rest. It was a good jacket though and the eVent material had proved waterproof, durable and long-lasting.

Meanwhile, I managed to rip my Polaris Summit jacket a few weeks ago when I came off my bike on some ice. This jacket had been my fully waterproof cycling and running jacket for a couple of years. It was fairly lightweight, had a good hood, was fully waterproof and was somewhat breathable. It had a rubberised feel to the inside though and did get a little clammy if I worked hard in it. It now has several holes in the left sleeve thanks to my crash so has replaced the Gill as my kayaking windproof.

Requirements for a cycling and running waterproof jacket

I had a list of requirements for such a jacket and of course some desirable features too. First and foremost it had to be fully waterproof. I had other showerproof tops and I don’t mind getting a little wet in showers anyway. I also have two very thin lightweight Karrimor tops which are barely showerproof but do provide an extra layer should the weather take a turn for the worse. However, with this latest purchase I was looking for a full-on waterproof for those days when it is definitely raining and I’m going to be out for a while. It therefore had to:

It would also be nice if it

Finally, some of the more expensive models are now made from fully waterproof but stretchable material. Most of these are more than £200 though and many a fair way north of that figure. I was hoping to spend half that!

After a bit of shopping around and reading of reviews I came across the OMM Kamleika Race II jacket.

OMM (Original Mountain Marathon) have a reputation for making good, no-nonsense kit that can withstand the worst weather that the UK can offer. They started making clothing for the Original Mountain Marathon. This a 2-day mountain event, held in a different region across the UK every year. It was first held in 1968 and continues today. The full-length course is a double-marathon length race. Each team must carry all their gear, including equipment for an overnight camp. Moreover, the course is not disclosed until the race begins, so each team must have good navigation skills. It’s the forerunner of modern adventure racing.

The kit they made was designed specifically for this race and the Kamleika (from the Aleutian word for a long waterproof robe) range of jackets, smocks and trousers have become famous amongst mountain marathon runners and hikers alike. They are unique in that they are specially developed to be stretchy and produce minimal noise when running. OMM now have a larger range of clothing and equipment, also specially created for mountain marathons.

The OMM Kamleika Race II jacket seems to fit my needs perfectly. OMM use their own Kamleika material that has four-way stretch built into it. It also has a soft-touch feel so doesn’t rustle too much and the latest version has stretchy seam taping too. The stretch is noticeable but we’re not talking super-stretchy. It’s just enough to give you plenty of freedom of movement when wearing it. The soft-touch feel is nice too. Again, this isn’t quite softshell comfort against the skin but it isn’t plasticky or rubbery like most hard-shells. 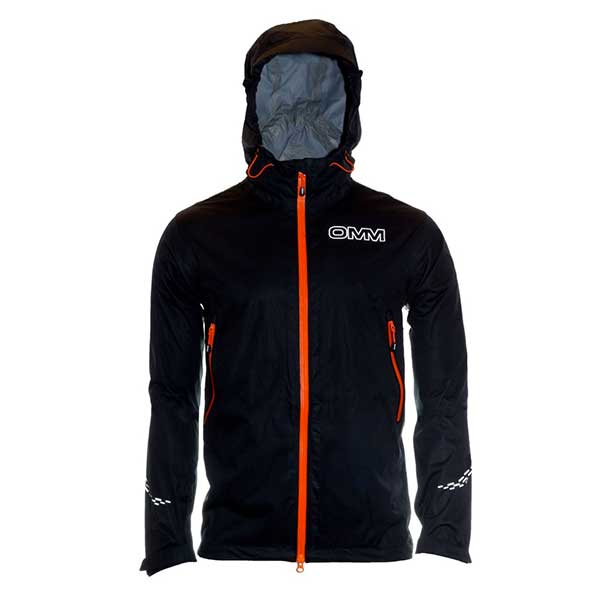 It is however fully waterproof with a quoted hydrostatic head of 15,000mm. It also has fully taped seams and waterproof zips to keep out the worst of the weather. Breathability is quoted at 12,000g/m2 which is pretty good and from the reports I’ve read it performs well in this respect. Weirdly, the soft-touch feel makes it feel more breathable than typical hard-shells. This may just be perception rather than actual performance but sometimes that’s all it takes. 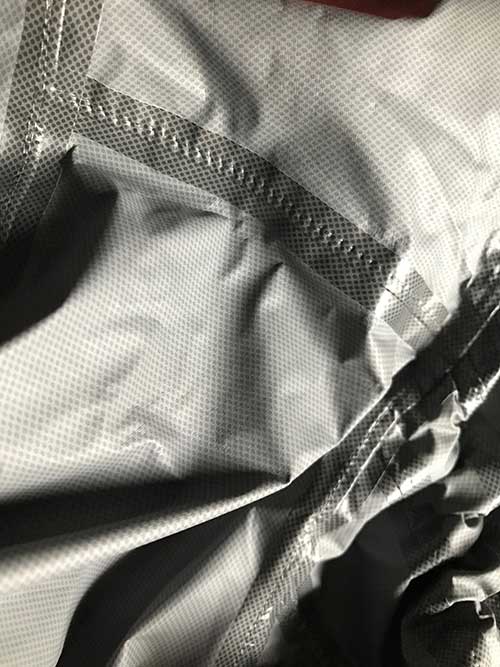 I’ve yet to use it hard in a wide range of conditions, but initial tests show water beading off it well. 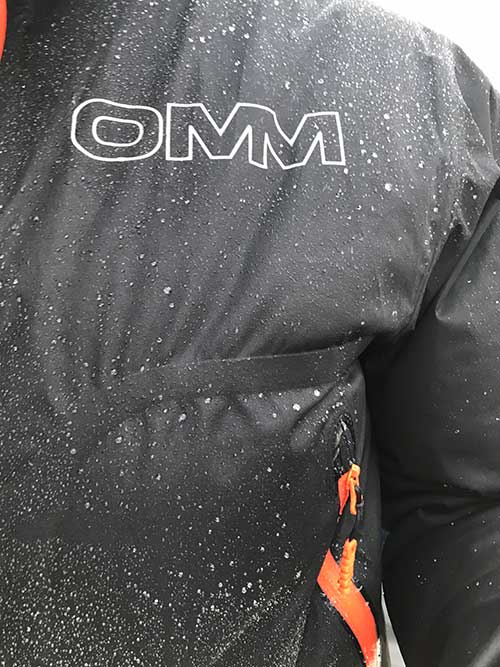 That’s almost always the case with a new jacket though so I’ll try to report back after more uses and more importantly several washes. On the subject of washing, care instructions are the usual for hi-tech fabrics. Cool wash, non-biological detergent, no fabric softener and tumble dry on low to medium heat. It is of course suggested that you use speciality detergent, specifically Grangers® Performance Wash. 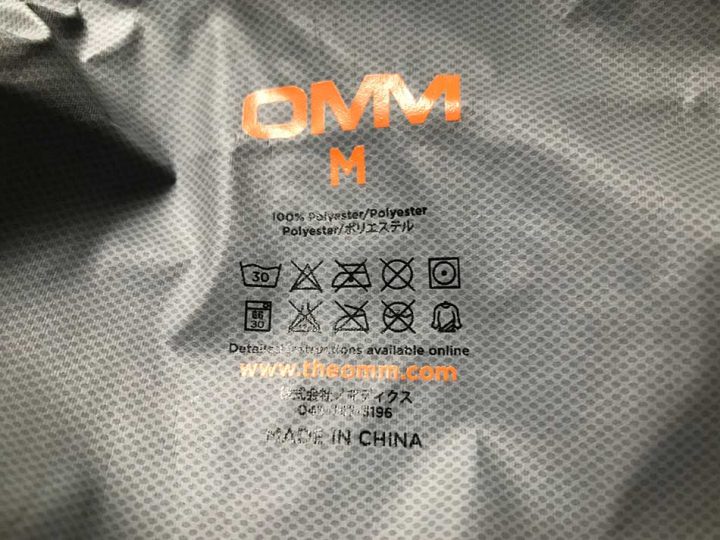 With the all important performance requirements ticked, it was on to the detailing. The hood folds away and is held in place with a velcro tab. The hood itself has plenty of adjustment and is large enough to fit over a hat or helmet (at least it is for my small pin-head). More importantly for me volume adjustment and adjustment around the face also allows me to get it snug enough to not blow around too much in the wind and to stay up without obscuring my view.

The zips are all waterproofed and have neat little OMM branded pull tags. 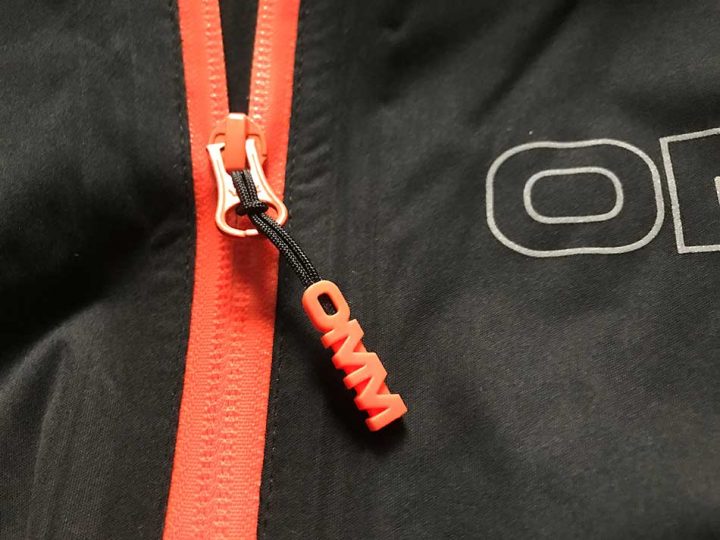 The cut of the jacket is race orientated so fairly snug. Most people seem to say that you might need to buy a size up, but I’m 5’7″ and 70kg and usually wear a medium. The medium feels plenty roomy for me, if anything I’d like it a little tighter fitting but the small would be too small. There’s plenty of room for a base layer and even a mid layer under it for me. I’ve even managed to wear it over the top of a thick down jacket, but it was a little tight like that. It comes in a small range of colours with the traditional OMM black and orange seeming to be the easiest to get hold of. It also has some reflective detailing on the back and the sleeves. The back of the jacket also has a small tail drop making it suitable for a wide range of activities, cycling as well as running.

At 260g it’s a lightweight jacket and packs up small enough to fit into a cycling jersey pocket or a small backpack. I’ve weighed mine and it comes in at 265g so pretty much spot on with the manufacturers quoted weight. There are lighter jackets out there but this one also feels fairly durable – something to bear in mind if you’ll be carrying a backpack whilst wearing it which I will.

It also has two large pockets that will easily accommodate an OS map. The pockets are made from a thin mesh and therefore the pocket zips double up as vents for when the going heats up.

All it all it ticks all the boxes, it looks good, should perform well and the stretch soft-touch fabric makes it feel good too. So, down to the all important price. As I said before, most fully waterproof, breathable and stretch jackets are well over £200. This one has an RRP of £160.00, so I was on to a winner from the start. Of course, if you know me you’ll know I rarely pay RRP for anything. Wiggle had them on offer for £96, but only in an Extra Small or Extra Large, sportsshoes.com had them at the same price but again not in a medium. SportPursuit however had them slightly cheaper at £94.99 and had my size too. I did have to pay £4.99 postage on this but it still came in at under £100.

The Kamleika Race II is also available as a smock rather than a jacket. The smock RRP’s at £140 (and is available elsewhere at around £90), it has a short zip and weighs slightly less at 230g. I decided that the full length zip made it more versatile though so went for that.

With January throwing some pretty miserable wet weather at us I didn’t hesitate too long before placing an order with SportPursuit and the jacket arrived a few days later. I’ll report back here once I’ve used and abused it but hopefully it’ll perform as well as expected in the real world. I have a number of long Offa’s Dyke runs planned in which I’m sure it’ll prove its worth, and it’ll get used on my bike. Probably on the road, on the mountain bike and for Cyclocross next Autumn. I’m also signed up to do the Fabian 4 Dyffryn Conwy Mountain Challenge and have to carry a windproof and waterproof top and bottoms so it’ll be needed for that as well.