Following on from my run along the Coast path from Llanrhystud to Aberystwyth last weekend, I thought I’d continue with it today with a coast path run from Aberystwyth to Borth and then from Borth to Tre Ddol.

Now, I know two coast path runs don’t make a pattern, they don’t make a routine and they certainly don’t make a habit, but anyone that knows me will know that it could very well be the beginning of a project! I made sure I started from the same place as I finished last week so that I haven’t missed any sections of the coast path out and I’ve now run the entire 20 mile section from Llanrhystud to Tre Ddol. I guess that means that next weekend I’ll be going from Tre Ddol to Machynlleth. It’ll take quite a while just doing one run a week but there’s no reason why I shouldn’t be able to run the whole coast path over the next couple of years. It certainly sounds like a fun challenge and one that will take me to places I’ve never been before, exploring the fabulous coast of Wales.

All of this of course assumes that Anna and Morgan are willing to be a support crew for me again as I’ll have to start travelling increasing distances to do the runs each week. This week it wasn’t too bad. Anna gave me a lift into Tan y Bwlch beach in Aberystwyth and I set off from there. First around the marina and then along the prom before tackling the slopes of Constitution Hill and heading out onto the coast path proper. Things were feeling easy by the time I got to Clarach and I was going well, but the stretch of coast path between here and Borth is very hilly and was extremely muddy and slippery underfoot. I saw a few other people walking along the path and every single one of them commented on the fact that they’d slipped over several times and had been on all fours trying to get up and down some of the slopes. I managed to stay upright, but only just and was reduced to a very slow pace at times.

The views were good though with snow-capped hills in the distance. It wasn’t the nicest of days; after a crisp, clear frosty start it was now grey, cold and overcast. Perfect for running but not so good for photos. I did take the obligatory selfie (I knew there was a reason I should have shaved beforehand), and one of the view along the coast path. 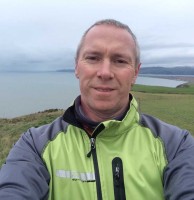 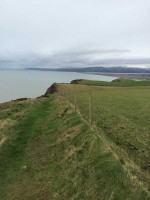 Maybe I should have gone out earlier while it was still frosty but that would have meant getting Anna up earlier and I did 90 minutes on my bike first, completing the TrainerRoad workout Eclipse which consists of 3x 20 minutes sweetspot efforts.

My legs were a little tired after that and I started to feel it as I descended into Borth, but I’d only been going for just over an hour so decided to continue on to Tre Ddol.

The Coast path takes quite a detour in Borth, heading inland, away from the coast past St Matthews Church to the River Leri where it crosses the river and then heads across some extremely muddy fields to join a path along the edge of Cors Fochno. Now, I know that this is a bog but the path here was ridiculous. It was soaking wet, boggy, peaty and very difficult to run along. I was up to my knees in mud much of the time and if not I was sploshing through ankle deep water. There wasn’t a dry patch anywhere. There are a few little wooden bridges over some of the boggiest sections but despite being covered in chicken wire these were dangerously slippery at times so it was often best to avoid them and just jump into the bog. I kept going though albeit at a slow pace thanks to the conditions. I was all alone along here and despite some very light rain was enjoying finding new ‘paths’ that I’d never been on so close to home.

I eventually emerged from the mud and the bogs of Cors Fochno in Taliesin where I gave Anna a quick ring so that she could pop out to collect me from Tre Ddol. It was just a short little run along the road from here to Tre Ddol where I finished for the day just over 2 hours after staring. The distance was 11.7 miles so with the 9.9 miles I did on Coast Path run last week, that’s 21.6 miles of the coast path done so far – just another 848.4 miles to go!!!