Just a quick review of a the Divoom Aurabox that I acquired the other day courtesy of mobilefun.co.uk. I’d been thinking about getting a bluetooth enabled speaker so that I could play music or podcasts from my phone for a while. Doing so via bluetooth works well in my car but since getting rid of my huge hi-fi system whilst decorating my office we didn’t really have a suitable way of doing this at home.

The Divoom Aurabox is a medium-sized bluetooth speaker unit with a few extra features. In addition to the speaker itself it has a ‘screen’ on the front comprised of 100 RGB LED lights. These can light up in 8 different colours allowing you to create patterns on the screen. All of this is controlled via an easy to use mobile app. It arrived yesterday, so after a quick unboxing it was time to play with it.

I wasn’t really sure what to expect from it. At around £59 it isn’t the most expensive speaker system out there and with it’s lights and other ‘funky’ features I was worried that it might be a little cheap and plasticky but I was pleasantly surprised by weight of the box and then the good quality, unstated packaging. Things were looking up. The unit itself was good quality too. There was a fair bit of weight to it and it seemed well put together. 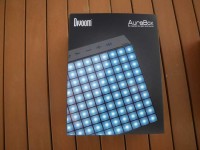 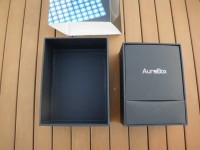 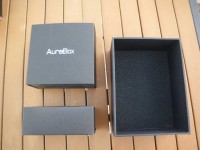 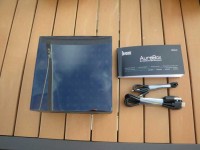 Whats in the box

In the box was the speaker unit itself, a USB charging cable, a 3.5mm headphone cable and an instruction booklet. The entire unit is a little over  4â€ square and about 2â€ wide. The LED light wall is made of plastic, while the rest of the speaker is made from a black matt rubber. The speaker grill is on the back of it and the LED’s on the front, whilst on the top are controls such as an on/off button, Play/Pause, FWD, REV etc..  There’s also a micro-USB recharging port and aux jack near the speaker grill. The instructions don’t say a huge amount but they were in proper English and told me all I needed to know. Essentially what each of the buttons do, how to charge it and the fact that I needed to download the free Divoom Aurabox App in order to control it. 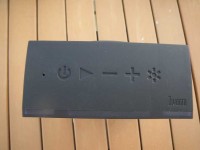 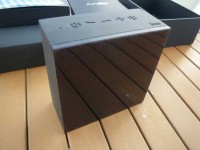 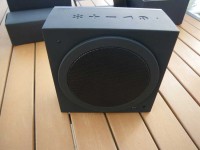 Once I’d downloaded the App I was able to start streaming music from my phone straight to the Aurabox. It worked flawlessy first time, connecting to Bluetooth and then simply playing whatever music was playing on my phone, whether that be from the built in music player within the Aurabox App, the Music app on my phone or the podcast app. 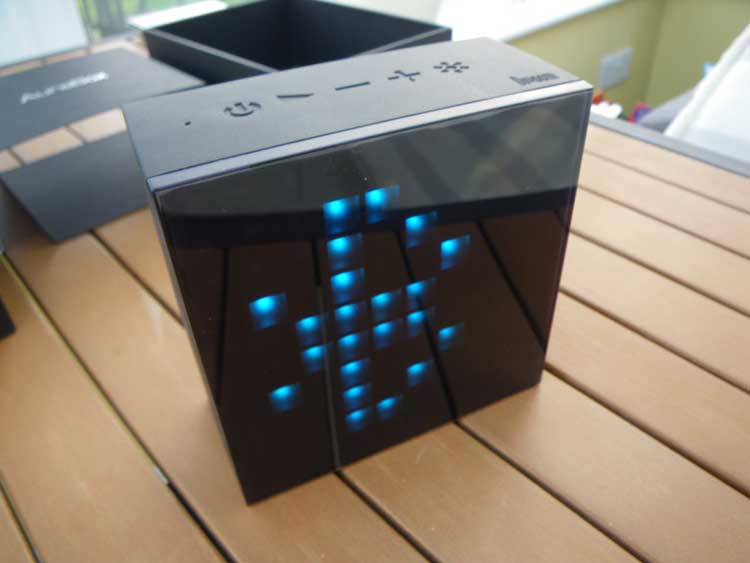 The app itself was also easy to use and allows you to control what is displayed on the LEDS, configure various options and set up notifications etc.

The sound quality was good, probably a little better than I was expecting really from what isn’t a huge device. Once the volume was cranked up (using wither the volume controls on the device itself or on the phone) it was fairly loud too. Certainly more than enough for any of the rooms in our house, even if we were having a party. We’ll have to see what it is like outside during a summer BBQ but I think it will be fine, without upsetting the neighbours too much!

I was also able to adjust the display on the LEDS. The Divoom Aurabox app comes with lots of built in design within a ‘Gallery’ section of the app. There are loads to choose from, some are just static designs, others are animated. There are also a few built in screens that allow you to display the time, the temperature (in ºC or ºF) and a few other options such as lights that flash in time with your music. 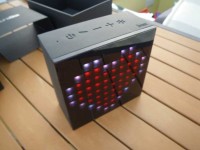 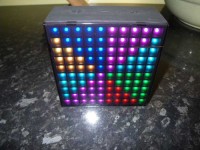 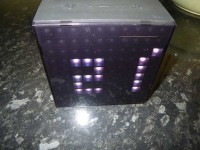 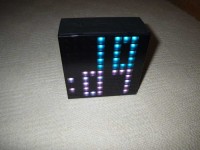 Pressing the on/off button quickly also displays the battery gauge on the screen which was a nice touch. Talking of the battery, it came fully-charged out of the box we had the Aurabox on for around 6 hours yesterday sometimes with music playing and the lights flashing, other times with just the lights on and it was still showing around ½ charge after that. Charging is done from any USB plug via the included mini-USB cable.

Morgan had fun playing with the design element of the app which allows you to make your own designs for the screen. He created, Minecraft Creepers, Welsh Flags, animated Space Invaders and even an animated ‘Hi Alan’ message. None of them took him very long and he seemed to enjoy it. These designs can be saved to the app and replayed at any time.

Finally, you can get notifications on it too. Facebook, Twitter, Phone Calls and other notifications that would pop up on your phone can cause an appropriate icon to appear on the LEDs of the Aurabox. You can control which notifications you get from the App. I’m not sure how useful that will be to me, but I guess it will be for some – I prefer not to have too many notifications on my phone as I like to be in control of my gadgets rather than them ruling me, so I don’t want even more places for notifications to bother me, but it’ll be a good feature for many people I’m sure.

Overall it seems like a well built and well thought out device. The speaker sounds good, the LED lights are a bit of fun and it is all put together well. The App works perfectly and is easy to use and the the Aurabox responds quickly to it. The only thing I haven;t worked out to do is change the colour of the lights used to display the time. It seems as though this isn’t possible at the moment and I don’t like the default colours so I shall try to contact the manufacturers to see if this is something they can add in a app update. I’m sure it is, and it might be nice to not only be able to change the colours, but maybe also the ‘design’ of the clock face too. I’ll let you know if they respond to my requests.