I’d already said that we’d have to get out for a family Boxing Day Walk, but encouraging Morgan to do so may not be easy. However, during my Boxing Day Swim I discovered from a dog walker that there was a dead whale washed up on the beach. A dead whale at Ynyslas? that should be the incentive that Morgan needed and it seemed to do the trick.

So we put on our coats and headed out into the wind to find it. I had my new GoPro Hero camera with me along with a selfie stick for it so there were a few silly shots of us walking to the beach and around the estuary to the point where we found the dead whale. It had clearly seen better days as quite a bit of it had rotted away, but it was still clearly a whale, probably a minke whale. It wasn’t huge but it was still pretty big and quite a sight. There are often dead seals washed up on the beach, sometime dead porpoises and dolphins, but dead whales at Ynyslas are a little rarer. 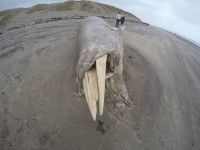 Dead Whale on the Beach

Morgan was suitably impressed and it made the walk worthwhile, although he did then moan a little whilst walking into the wind to get home. It certainly wasn’t cold out there but the wind and sand made the going a little tough on the way back. Anna’s new activity tracker seemed to track her steps pretty accurately though and I got to play with my GoPro so it was a good boxing day walk all round.

Back at home it was time for round two as far as Christmas dinners are concerned with another roast dinner comprised of leftovers, and then Morgan and I got settled in to build his huge Lego City Explorers Deep Sea Exploration Vessel.