Our summer of long weekends continued last weekend with a trip to Scotland, camping on the shores of Loch Lomond. The primary objective of the trip was for Morgan to visit his friend Cameron who moved up here earlier in the year, but we obviously wanted to enjoy the scenery too.

The Drive Up – 3 Countries in One Day

We packed the car on Wednesday evening and then started the drive north immediately after work on Thursday. The car was full of camping kit and our swimming wetsuits. It would have been nice to take the Stand Up Paddle board, windsurfing kit and bikes, but there just isn’t enough room in the car these days and with only a few days away it just wasn’t worth it.

We stopped a few times along the shores of Lake Bala to find a geocache and then decided that it would be nice to find a cache in 3 different countries in one day, Wales, England and Scotland. So, once in England we stopped again to find a second cache, and stopped at services for dinner too. Once in Scotland there were no caches on our route so we decided to find one local to our hotel room for the night. We were staying at a very plush, new Premier Inn in Dumfries, so once we were checked in I was ready to go out for a walk in the dark to find a geocache. Morgan and Anna weren’t so keen though so we didn’t go and failed to complete 3 countries in a day – There’ll be another chance one day I’m sure.

We arrived at our destination, the Millarochy Bay Campsite on the eastern shores of Loch Lomond just before midday. We were greeted with a slightly unwelcoming welcome, being told that “You can’t come in yet, we aren’t open until 12”. Being just a few minutes early and after a long drive this wasn’t quite what we expected. A nice friendly “Hello, we’ll be with you in a few minutes” would have been much nicer, but after midday they let us check in, showed us to our pitch and were a little more friendly than they had been initially.

We set to putting up the tent. The midges started their attack almost immediately so we paused to apply bug spray and then paused again to shelter from a downpour, but the rain soon eased and within no time at all we had the tent up and looking good – Anyone would think we were Scout Leaders! Next was the new awning we had bought. It wasn’t designed specifically for our tent but we thought we’d be able to get it to work. We didn’t think it would fit on the front of the tent though so attached it to the side and after a little bit of head scratching had it set up and looking good. It probably would have fitted on the front after all so we’ll try that next time, but it worked well, kept the inside of the tent cleaner and tidier and gave us a nice outside area for cooking and chilling. Our tent and awning may be overkill for the three of us, but it’s nice to have lots of space and nice to be able to stand up inside the tent too. 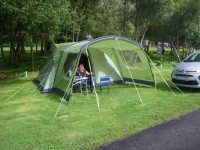 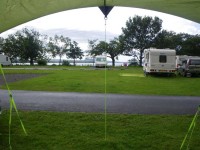 With the tent up we needed some supplies so I decided it would be nice to walk into the nearest village, Balmaha. It wasn’t too far and the route took us along the shores of Loch Lomond, following the West Highland Way. This long distance footpath is very popular with backpackers and we saw plenty of them walking along this stretch fully laden with their backpacks. We may have to try it one day. 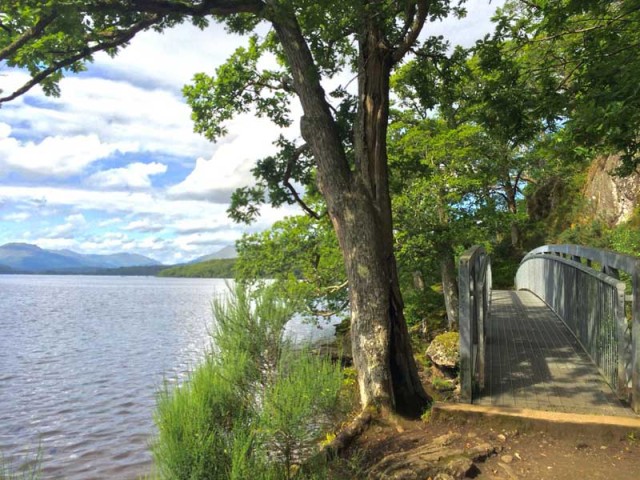 There was a geocache on the way which we soon found, and a puzzle cache to do as well. The puzzle cache, called Balma-ha ha ha, consisted of 8 waypoints, each of which had a container the housed the feedline of a joke. The punchlines were in the clue of the cache and each had a number assigned to it. From this you could work out the coordinates of the cache itself. We had fun trying to guess the feedlines first and of course had fun finding out what they really were. We found a few of the clues whilst in and around Balmaha and then the others on the way back to the campsite, leaving the final for the next day. 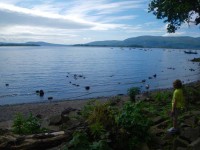 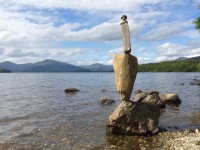 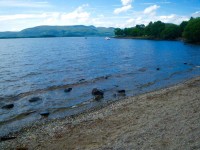 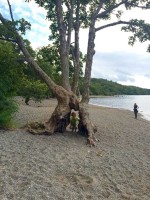 The walk there and back was gorgeous with lovely views out across the calm water of Loch Lomond to it’s various islands. The secluded beaches and trees down the waters edge give it an idyllic, peaceful feel and made the waters look very inviting – if only I had brought the stand-up paddleboard.

Balmaha itslef was a lovely little village too. We wandered around the little harbour, popped into the toilet in the Oak Tree Inn and then decided to stay for dinner (and ended up going back there for dinner three nights in a row). I had a lovely Clansman burger with haggis today. We did another puzzle cache whilst in Balmaha and walked up a little hill to a viewpoint looking out to the island of Inchcailloch.

Morgan went paddling on the way back and then walked back barefoot, I meanwhile couldn’t wait to go for a swim so once back at the campsite I donned my wetsuit and jumped into the loch for a nice peaceful swim across the bay. Morgan the joined me and we swam around to a little slipway at the other side of the campsite. Morgan’s swimming looked quite good, so with some more practise and some more stamina he could be joining me on open water swims soon. 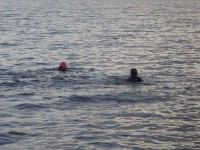 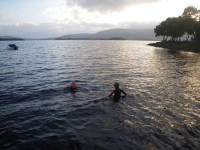 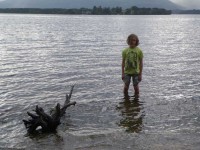 Not a bad way to start our little break in Scotland and we felt as though we’d made the most of it already.