Our second full day of our trip started in Glentrool with absolutely pouring rain. The plan was to mountain bike early though before the others were awake so I got up, put on some waterproofs and headed out into the pre-dawn light. It was certainly wet and the weight of the rain had dropped bracken, fern and brambles into the trail. There was only a Blue route and Green Route so I headed off into the gloom and the wet along the Blue Route, brushing past soaking wet vegetation on either side.

Again it was an easy ride but with some nice flowing singletrack. It was only short though so I did the Green route as well. I was going to go for a run along one of the walking trails but I was so wet by the time I got back that I decided against it.

I dried off, warmed up and had breakfast in the van with Anna and Morgan.

We then set off on a scenic route through the Galloway Forest along mile after mile of narrow twisting road. It was still grey and gloomy and before long the warning light came on in the van again. This time it was accompanied by a flashing light too and we were in limp mode. A couple of stops to reset it worked but after a while it came on and stayed on. We finally limped towards civilisation in Saltcoats and Ardrossan. We tried to find help from a local garage but without any luck so we pulled into a Sainsbury’s Car Park and phoned our breakdown cover company. Before long, a recovery vehicle from DC Diagnostics was with us. He plugged in his computer, told us that the faults were inconclusive and he would need to do further tests on more sophisticated equipment and instructed us to follow him back to his garage.

Hi garage turned out to be a single lock-up garage adjacent to his house. There were lots of recovery vehicles parked around and about but it seemed as though it was just him operating from his residential address. 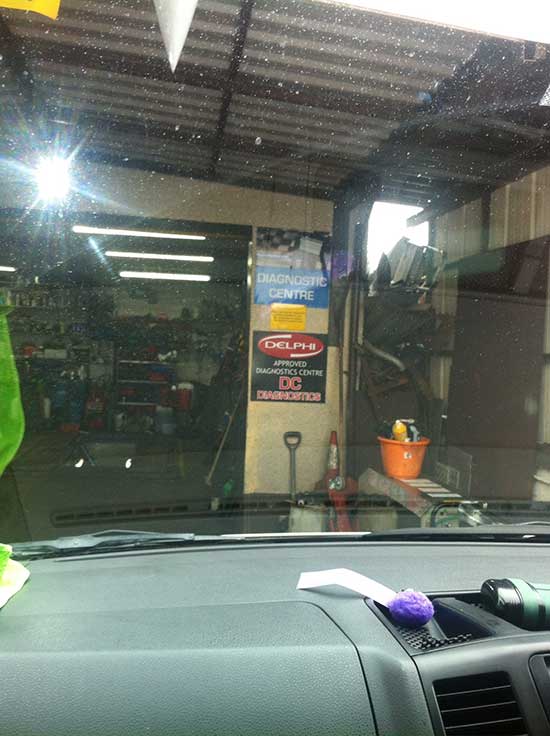 After some tinkering he informed us that we needed a new MAP sensor but that there was nothing he could do then and there on a Friday afternoon as he would have to order in the part. He said that it would be OK to drive and we only had about 9 miles to go anyway so the plan was that he would order the part in for Monday morning. We could go to Great Cumbrae as planned but instead of starting to head home on Sunday afternoon we would wait an extra day for the part to arrive, he would fit in on Monday for us and we could be on our way.

We limped off and made it to Largs feeling a little upset that Ramsey was broken, but with a plan in place that would hopefully work out. We wouldn’t really need to drive anywhere except back to the garage and we could at least still sleep in it.

After what had been a more stressful and slightly less enjoyable morning than anticipated we joined the queue of traffic for the ferry crossing from Largs to Great Cumbrae.

Great Cumbrae is only about a mile offshore and the ferries leave every 10 minutes so there wasn’t much of a wait, nor did it take to long for the crossing. We were soon on Great Cumbrae.

Great Cumbrae is the larger of the two islands known as The Cumbraes in the lower Firth of Clyde. It is home to the National Watersports Centre, where my race on Saturday was based . It also contains the Cathedral of the Isles and the University Marine Biological Station, Millport. It is popular as a day trip destination for people from Glasgow and has an 18-hole golf course which sweeps almost to the summit, and a round-island road much favoured for family cycle runs.

We headed into the only town, Millport where we had a late lunch at The Garrison before taking a stroll along the prom. We checked out the harbour, took a look at Crocodile Rock and chilled in the sunshine. 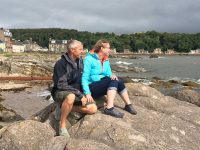 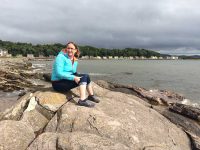 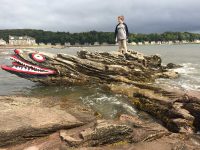 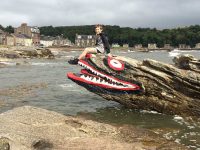 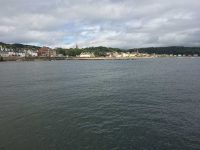 The island is roughly 2.5 miles long by 1.2 miles wide, rising to a height of 127 metres above sea level at “The Glaid Stone” – a large, naturally occurring rock perched on the highest summit on the island. There is a triangulation pillar nearby, as well as an orientation point which indicates the locations of surrounding landmarks.

It was now a lovely day so we relaxed as best we could following the stress of the morning and got into the island lifestyle. As evening fell we returned to the camper parked up alongside White Bay on the northern side of the island.

Morgan and I headed into the water. Morgan on the SUP and me on my Surf Ski. Morgan didn’t stay out long but I paddled around the bay and ventured a little further out into the chop trying to get some last minute practise in. There was an inquisitive seal keeping an eye on proceeding and birds galore along the waters edge. 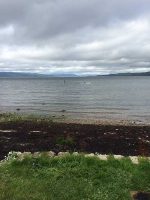 Playing on the water 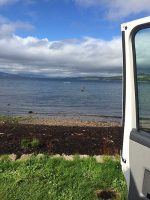 We then ate in the van and watched rainbows and sunset before settling down for a peaceful night overlooking the Firth of Clyde.

Parking spot for the night 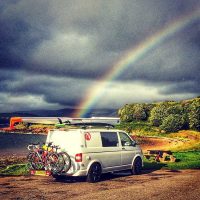 Pot of Gold on Great Cumbrae 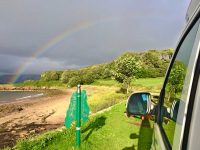 It was still a little cloudy over the hills in the distance and it was a little difficult to work out what was mainland Scotland and what was islands but the scenery was typically Scottish.

Tomorrow will be the Great Cumbrae Kayak Race so things were planned for that.