It’s been a while since I posted an aquarium update here, so time to make amends.

It’s been a bit of a mixed bag really. The fish and shrimps are doing well as are some of the plants. The Anubias are growing well and looking good. The moss is growing like mad and most of the stem plants are doing OK too. I’ve even got things balanced well so that algal growth is virtually non existent. The low-growing, carpet forming plants such as Eleocharis and Echinoduros haven’t been faring so well though and neither have the Pogostemon helferi and Staurogyne repens. They all seemed to be doing OK for a while but then gradually almost imperceptibly started to disappear. They just slowly faded until all of a sudden there was little of them left. This also had the knock on effect of destabilising some of the smaller particles of substrate. The stems and roots of these plants were holding the substrate in place before but now that they have gone it has started to migrate downslope to the front of the tank.

All a bit of a shame really as they were doing well when I was growing them in the dry start phase but they don’t seem to have survived being submerged. This also makes it difficult to try replacing them as I’m not about to completely drain the aquarium to start again. I can only conclude that once flooded they no longer had enough CO2.

With that in mind I have decided to add a CO2 system to the tank. I should have done this in the first place as it’s what I ‘normally’ do and it makes sense to me, but I was talked out of it by numerous people in online forums. I’m now giving it a go though. In the past I’ve used a homemade CO2 system and have produced CO2 from a home-brew yeast and sugar solution. This time I’ve gone a little more hi-tech and have bought a pressurised CO2 system from CO2 Art that works off soda stream cylinders via a solenoid controlled regulator that pumps the CO2 gas through a bubble counter and into the tank via a diffuser.

All of the kit arrived last week.

It is now installed and working in the tank. 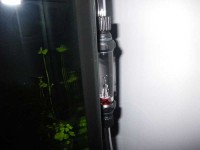 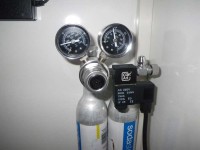 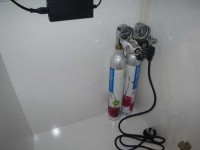 Unfortunately the drop checker that came with it won’t fit on my tank so I’m trying to get it replaced.

We’ll have to wait and see if it makes a difference. The plants that were struggling are still in the tank in a much reduced state, so I will see if they can recover at all before buying new plants. However now that I’ve changed the inputs into the tank by adding CO2 I’ll no doubt have altered the balance and will start getting issues with algae again. It’ll probably take a while to get things balanced and settled down again and will take even longer to see if the CO2 actually helps. If not, it will have been fun trying and I can always change my plans, give up on the idea of a lush green carpet forming a lawn effect across the front of the tank and go for the plants that do grow well instead to create a kind of forest landscape rather than a grassy hill landscape. I may not have the effect I want yet, but trying to get it is all part of the enjoyment.