It’s always a little fraught updating the operating system on a production machine so I like to make sure that I have at last a day or two to sort things out should anything go wrong. I also make plenty of back-ups before hand just in case.  I therefore make cloned backups using SuperDuper!. I’ve been using this app for at least 10 years now, probably more than that and can whole-heartedly recommend it. Their website isn’t the most inspiring, but the application is perfect and their support is good should you need it too. Once set up SuperDuper! just does its thing, routinely making backups for me. It’s quick, unobtrusive and more importantly ‘just works’ and can be relied upon. I make cloned backups using SuperDuper! all the time and like to keep a Daily Clone, A Weekly Clone and a Monthly Clone. This means that everything is backup up every day, but should I ever need to roll back to an older version of anything I can. I also have a Time Machine Backup which I use to restore individual files should I ever need an older version of anything and as can be seen from the screenshot an ‘Old Daily Clone’ as well – This will have a copy of my previous operating system on it for quite a while just in case I come across any problems further down the line.

On the subject of backups I’ve changed my offsite backup strategy recently as well. I always used to use Carbonite but had some problems with their service and not only lost confidence in it but decided that it simply wouldn’t work because there was no way of carrying a backup over when you upgrade or change your computer. A backup that doesn’t work properly is not a back up I want to rely on. So, I now have two portable Seagate 1TB drives that I use as an offsite backup. One of them is always stored offsite at work, in a completely different building in a different town to my computer and other backups. Then, once a week I create a backup on the other portable drive, take that one to work and bring the other one home with me. What with those offsite backups, my Time Machine backup and a whole slew of Cloned drives I think I’m covered. Fire, theft, flood, viruses, bugs and incompatibilities, coffee spills, clumsiness or plain stupidity should all be covered. Lets hope so anyway.

There are always one or two programs that I rely on day in day out that can be a little problematic when it comes to updating your Operating System. If for some reason they don’t work under the new operating system I would have no choice but to roll back to the old one.

Most applications are fine and had already been updated to work with Yosemite and even to take advantage of some of the new features. Those that are downloaded from the web had all been updated and most were free updates too. However, some applications that I have are a little bit older and might not work. I checked most of these using RoaringApps and most seemed OK. It didn’t look as though there would be too many incompatibilities and most things than ran under Mavericks looked as though they would run under Yosemite too. Adobe Photoshop CS4 looked to be OK which was good as I can’t afford to upgrade and it is getting a little long in the tooth now. Microsoft Office looked OK too. I don’t use it much if I can help it, preferring to use Numbers and Pages from Apple where I can, but I still need it from time to time. The other application that is always a worry is my accounting software Acclivity AccountEdge. I’ve been stuck on an older version of this since they decided to move over to a subscription charge for their application. I can’t afford to pay the annual subscription fees so use an old version instead.  My worries were compounded when I checked for compatibility issue on their website. The official statement was that the latest versions of their software would work under Yosemite but they don’t support older versions so couldn’t say either way if it would work or not.  Reading the following on a support thread on the subject of Account Edge and Yosemite didn’t help matters:

DON’T DO IT!!!! I HAVE JUST BEEN LOCKED OUT OF MY ACCOUNT EDGE. They are manipulating me to purchase the latest version on the accountedge software. I can’t even access my files to download them. BEWARE OF ACCOUNT EDGE!!!

As usual this piece of software was my main worry with the upgrade. It’s my business accounting package that I use to keep track of invoices and payments and to fill in my annual tax returns so I couldn’t afford to lose any data from it or lose use of the application itself. However, with all my backups in place I thought I would try upgrading to Yosemite anyway to see if it would work for me. I did take the added precaution of taking screenshots of all open invoices and a screenshot of my annual accounts so far. If AccountEdge wouldn’t work under Yosemite I should be able to roll back to Mavericks and if the worst came to the worst I would be able to at least see which clients owed me money and how much I had earnt / spent so far this accounting year.

I can now report that AccountEdge did work under Mavericks for me, but I really should look into finding an alternative accounting solution though as I’m sure AccountEdge won’t continue to work forever under future releases of the Mac OS and I can’t afford to pay an annual fee to use it.

Anyway, after checking all of the applications that I could and making a number of backups, I went to the App Store, downloaded the installer, all 5.16GB of it which took most of the day. I then moved this to the Desktop so that it wouldn’t be deleted during the installation process, made a bootable installer copy on a USB stick and then started the installer up. It didn’t take as long as I expected so I was soon up and running with the latest and greatest Operating System from Apple on my iMac. 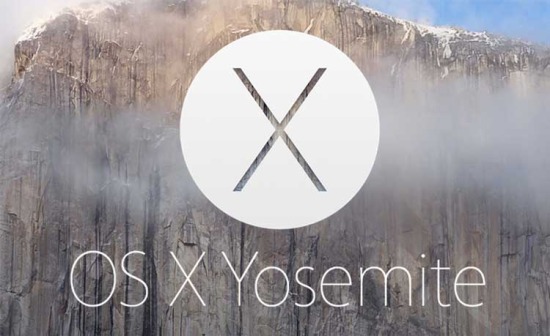 So far I’m quite liking it. I like the flat new design and it even seems a little quicker for certain tasks, but thee isn’t really much that’s new that I can use.

I was a little worried that the new Spotlight might make things a little slower. I’m a heavy user of Spotlight and use it as an application launcher. Type CMD+Space and then the first letters of an application, hit return and there it is. CMD+Space, i, p, return and up comes iPhoto, CMD+Space, i, t, return and up comes iTunes, it’s virtually instantaneous and second nature to me. With all of the new features of Spotlight in Yosemite I thought this process may have slowed down, but I’m happy to report that it hasn’t and all still works the way I’m used to. 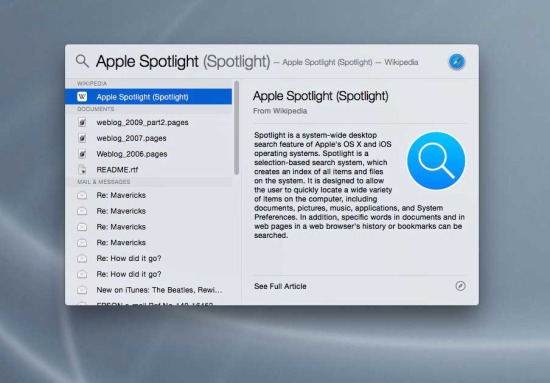 I quite like having Spotlight in the middle of the screen rather than up in the right hand corner too, but it would be even nicer if I could confine it to one of my dual monitors rather than having it pop up on whichever monitor has the current in-focus window open.

I don’t know if I’ll use many of the new features of Spotlight yet, but the currency converter and such like are nice touches.

I’ve had a little play with this and it all seems to work. I don’t know if I’ll remember to use it much though as no doubt I’ll just fall back to doing such thing in Photoshop as I always have done, but it does show off the power of extensions within OSX Yosemite and once developers start coming up with other extensions for other parts of the OS and other applications I’m sure some of them will prove to be very useful indeed.

Hand Off and Continuity

Unfortunately many of the new features of Yosemite are only really applicable to those fortunate few to have iOS devices that will run iOS 8. I’m not one of these so can’t try them out. Hand Off and Continuity sound good, but without an iOS device I can’t try them. The ability to make and receive calls and text messages through my iMac sounds good as well, but again these are only functional if you have an iPhone that can run iOS8.

We have plenty of iOS devices, I’ve got an original iPad that is stuck on iOS5, Morgan has an iPod touch that can only go as high as iOS6 and Anna and I both have iPhone 4’s that can run iOS7 but not iOS8. You know what that means don’t you??? Time for some new devices.

It would be nice to upgrade all of our devices but that would cost a fortune. Anna and I only got proper ‘smartphones’ in the form of our iPhone 4’s last year. We aren’t on them non-stop like some people are. Anna uses hers more than I do for Social Media applications, mine is really just a phone for those times when I actually want people to be able to contact me. More often than not I tend to ignore it or only check messages now and then anyway! I do use it when I’m away and use it for geocaching, running various apps, tracking my diet and plenty of other things, but as we haven’t had them long we can’t really justify updating them yet. Besides, we could only afford to upgrade to an iPhone 5, but the latest iPhone 6 looks quite a bit better so it’ll be best to wait until the next version is out and upgrade to the 6 once the prices drop and we can get a second hand one.

Morgan’s iPod definitely needs updating at some point. The battery doesn’t last very long these days and he has been wanting an iPad mini for ages, so that’s on his wish list.

In the same vein is my (now very old as these things go) iPad. As mentioned above it can only run iOS 5 so is several generations behind as far as the operating system goes. It also struggles to cope with many new apps and is a little sluggish. It’s lack of power means that it crashes now and then too as it simply can’t drive many modern websites and struggles to keep up with want we want to do with it. We do still use it quite a bit and it all works perfectly from a hardware point of view, it just can’t really cope with the demands put on it by more modern software. It’s definitely time for an upgrade and the new iPad Air 2 looks to be a likely candidate. Once we have one iOS8 device in the house though I’m sure we’ll be wanting to update them all.

It could be an expensive Christmas!!!