With my first race of the year tomorrow, now probably isn’t the most sensible time to perform open-freehub surgery on my bike. It’s too late though, pre-race tinkering is what I’ve been doing!

The rear wheel and more specifically the amount of drag in the rear wheel has been annoying me for ages. I’ve tried, and lots of other people have tried, to sort it out but with no success. No matter what we do the wheel just won’t spin freely and there’s so much drag that if I pedal backwards with the bike suspended in a bike stand the rear wheel spins backwards at quite a rate.

Taking the freehub apart and giving it a good service hasn’t worked before but what harm could it do to give it another go? Other than the risk that it might break something a day before my first race of the year! 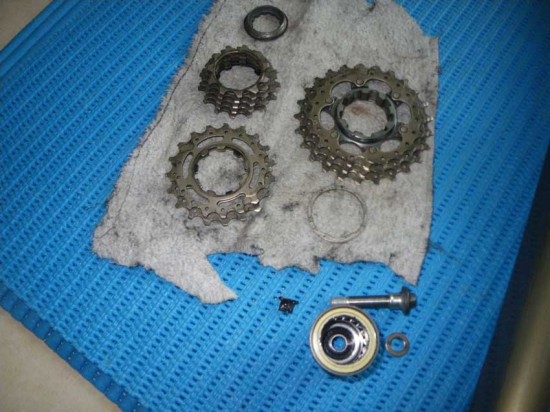 It’s all been taken apart though, so at one stage there were sprockets, washers, pawls and springs all over the place. It was all cleaned and lubed and I’m glad to say put back together again without any bits left-over! My bike is in one piece and has had a good clean and polish at the same time so is now shiny and looking ready for it’s race tomorrow. If only the same could be said for me. 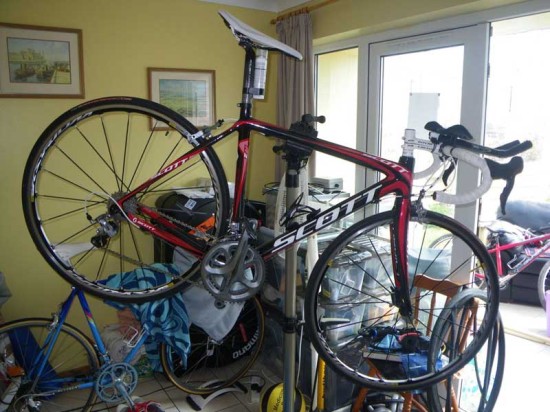 Unfortunately though it made no difference whatsoever to the rear wheel. Maybe it’s just time for some nice new deep section aero race wheels, I have after all been meaning to get some for ages. But then again, if I’m getting aero race wheels why not just go the whole hog and get a Time Trial bike that comes with a set of aero wheels. I’m usually quite ‘snobby’ about my bikes and like something a little different, but taking a look at the Planet X bikes their top of the range TT bike is pretty good value in comparison to anything else out there, even if it is £2,499.

A ridiculous price for a bike I know, especially seeing as my new car only cost me £3,000 but for a full Time Trial bike with Dura Ace groupset and deep section wheels it’s certainly a lot cheaper than something from the likes of Scott, Specialised, Trek or even more boutique makes such as BMC or Blue. I like the look of all of the Time Trial offerings from these, but a similarly specced bike from these manufacturers is likely to cost closer to £7,000.

Not sure I can afford any of it though, certainly not a top flight bike from the major brands, probably not a Planet X bike, and probably not even a set a wheels.

So, what of the race? Well, its the first of the year for me and I’m training right through it so it isn’t a high priority race. It’s also only a fairly small local affair in Newtown. It may only be an hours drive away but registration is at 6:30am so it’s going to be an early start tomorrow. I will of course be going fairly hard but I don’t want to go flat out as I want to keep training as per usual next week without having to take too much time off to recover. No tapering beforehand, no recovery afterwards, it should just be like a normal trainign session really. That was the plan anyway so I was hoping for not too much competition, but having seen the start list there are a few fairly fast competitors signed up so I may end up having to go harder than I want to. We’ll see what the day brings – I can at least always use my rear wheel as an excuse if I need it.