I got to play with a new feature of the TrainerRoad Beta software yesterday. The feature called TrainerRelay allow you to re-broadcast your virtual power data from TrainerRoad on your PC to a head unit such as my Garmin Forerunner 910XT watch. This essentially gives me a power meter that I can use to train with.

I’ve mentioned TrainerRoad a few times in the past but as a quick recap, it is cycle training software that runs on a PC or Mac. It gathers speed, cadence  power and heart rate data from ANT+ transmitters such as speed and cadence sensors and then using it’s built in power curves for 100’s of different turbo trainer models it calculates a Virtual Power reading. This allows you to train using power even if you don’t have an expensive power meter. TrainerRoad have 100’s of different workouts that you can use and several different training plans based around these workouts and the fact that they are based on power (albeit virtual power) means that you get a very consistent, highly targeted workout based on your personal abilities.

The new TrainerRelay feature takes this a step further by re-broadcasting the virtual power data back to your usual recording device such as the head unit of a turbo trainer or a training watch such as those in the Garmin series. The advantage of this is that when you upload the data from your watch to online training diaries such as Garmin Connect, Strava, Training Peaks and  Triblogs or offline applications such as Rubitrack, the power data gets uploaded too. Essentially you end up having a power meter without the expense of buying one.

Setting up TrainerRelay to work with my Garmin 910XT was easy. First I had to enable TrainerRelay from within the TrainerRoad application. This was simply a matter of selecting the option under the Devices tab of the application. 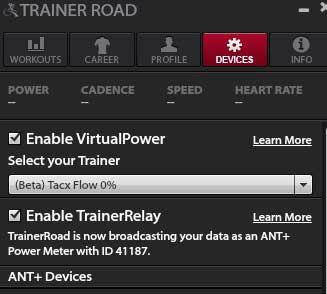 Next I had to pair my Garmin 910XT with TrainerRoad. Again this was easy, I just had to go to the Bike Settings screen on my 910XT, scroll down to the ANT+Power option and turn it on. With my 910XT turned on, TrainerRoad fired up on my PC and the ANT+ dongle in the USB port as soon as I started pedaling on the turbo trainer my watch beeped at me and told me that a power meter had been detected. It then happily recorded the power from the power meter (actually the virtual power re-broadcast from TrainerRelay) just as if there was a real power meter on my bike. Perfect.

I have to say the more I use TrainerRoad the more I like it, especially as things just seem to work – even in the Beta versions.

With TrainerRelay up and running it was time to do a workout. I was supposed to be riding in the real world today with a 75 minute session planned to include two 10 minute fixed gear efforts. The weather wasn’t great, I had Morgan at home with me so it was going to be much more efficient time-wise to do a session on the Turbo Trainer giving me a chance to play with the TrainerRelay feature as well. Rather than use a pre-built workout I decided to use the TrainerRoad Workout Builder application to create my own.

The Workout Builder only works on a PC at the moment but using it was easy. Just drag and drop intervals where you want them, change the duration and intensity and then save the workout and you have access to it from the ‘Custom’ tab on the Workouts Screen of the TrainerRoad application. Here are a few that I’ve built as seen in TrainerRoad. 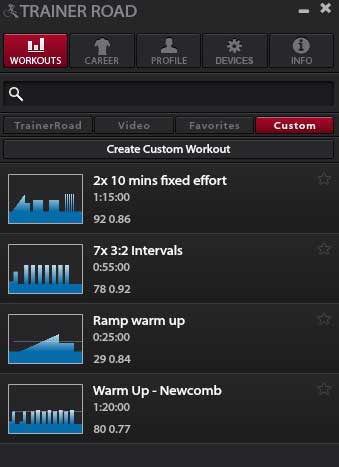 You can save sections of any workout to re-sue in subsequent workouts as well which makes creating new workouts a doddle.

The one I built yesterday was the 2x 10 minute efforts which I was hoping would replace the 2x 10 min fixed gear effort ride I had planned. It consisted of a hard ramped warm-up from 50% of my Functional Threshold Power (FTP) to 120% FTP, followed by 5 minutes sustained at 85% FTP. After a short recovery interval it was then into 2x 10 minutes at 95% FTP with 6 mins recovery between intervals. Finally, just for a bit of punishment I tagged on 5x 1 minute power-up intervals at 120% FTP with 1 minute RBI, all finished off with a cool down.

The workout turned out harder than expected and probably harder than most of the TrainerRoad sessions I have done to date. It was good though and everything worked as it was supposed to. I’m not really sure what it was targeting from a training perspective but by the end of it I felt as though I’d been working on lactate tolerance! Here’s how it looked once I’d finished the workout in TrainerRoad. 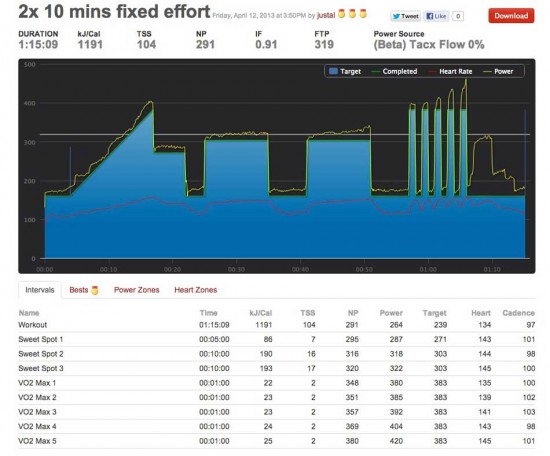 I had my Garmin 910XT on the whole time recording my workout and as per usual it recorded my speed, distance, cadence, and heart rate but this time, the TrainerRelay was also re-broadcasting my virtual power data from TrainerRoad so my Garmin 910XT was recording power as well. I went for a quick run immediately after the turbo trainer session but once back home from that I uploaded my data from my Garmin 910XT to various training applications and diaries and sure enough the power data was transferred along with the rest of the data.

Here’s how it looked on Garmin Connect 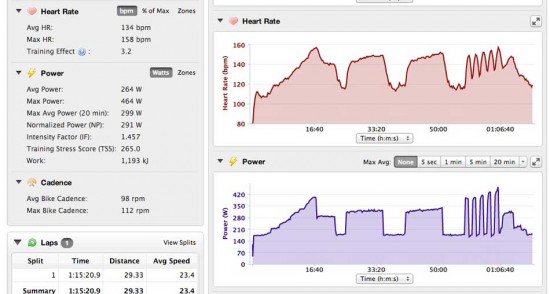 It also got uploaded perfectly to Rubitrack so here’s the workout in that, complete with power data.

It’s nice when everything just works as it should and I can see myself using this all the time now. I think I’ll have fun building some new workouts too, although I may try to make a few of them a little less difficult than this one!