Seeing as we enjoyed the hot pools and the campsite at Waikite Valley so much and we were a day or two ahead of our itinerary anyway thanks to the mad drive from Paihia to Whitianga last week, we decided to spend another night at the Waikite Campsite. Not only would that mean we didn’t have to look for a campsite tonight but it meant no long drives and we had a base for the day. Rotorua was only 30 minutes up the road so the plan for the day was to head to the main tourist attraction of Te Puia in Rotorua.

According to their website, “Te Puia is the premier MÄori cultural centre in New Zealand – a place of gushing waters, steaming vents, boiling mud pools and spectacular geysers.” We aren’t usually too keen on commercialised visitor attractions but as it’s the biggest of its kind in New Zealand we felt obliged to visit.

We started the day however with breakfast in the camper and a nice relaxing soak in the hot pools at Waikite – We were getting used to this pampered, relaxed and chilled out lifestyle by now. Whilst doing so we found an interesting moth. It was floating in the main pool and looking a little worse for wear but was still alive and I think we managed to rescue it, dry it out and revive it. It’s a Puriri Moth (Aenetus virescens), the largest of New Zealands moths and quite a nice looking moth too. It has an interesting life-cycle as well, spending the first five to six years of its life as a grub in a tree trunk, and then only spending the last 48 hours of its life as a moth. We may have rescued it but I guess it didn’t have long left anyway. 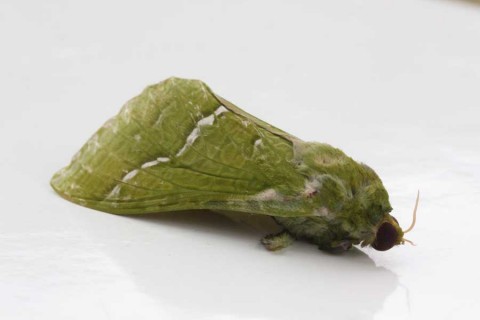 After our soak in the pools we hung our kit in the drying room and headed off towards Rotorua as planned. As we approached, we came across Te Puia, our tourist attraction for the day, so parked in the huge car park and made our way through the tunnel towards the entrance. 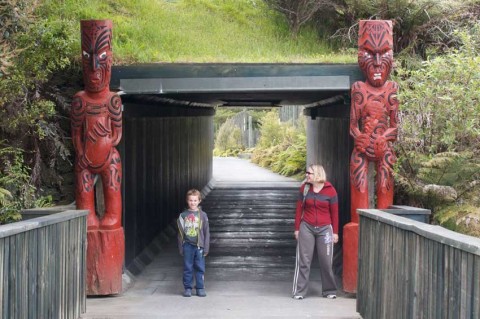 It’s not cheap to get in, but we paid the admission fees and entered via the turn-styles. Te Puia is a huge visitor attraction and has all the usual trappings of such a destination. Cafes, shops, information boards, guided tours, exhibitions and loads of Japanese people wielding cameras and snapping photos of themselves stood next to everything. And I mean everything, sculptures, canoes, geysers, notice boards, rubbish bins, toilet blocks, random bits of scenery, staff on quad bikes and ‘slippery when wet’ signs, they even pushed us out of the way of the things we were looking at so that they could take photos of themselves making fake poses. Kind of annoying and a little rude at times too.

We wandered around the site which has paths weaving in and out of the natural attractions which include geysers, mineral rich pools, bubbling mud pools, sulphurous vents and silica deposits. 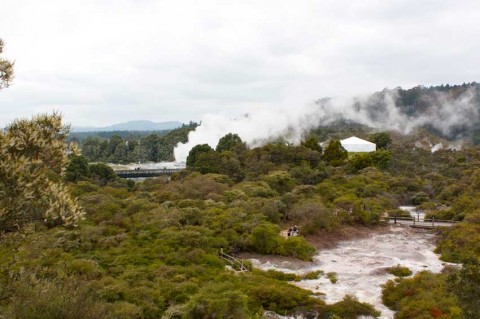 We first checked out a replica Maori village and then wandered off to look at the geothermal features. 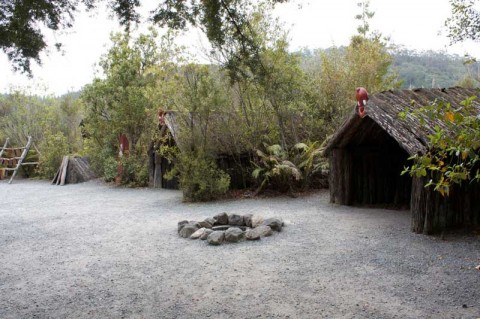 We couldn’t quite get our tongues around pronouncing this though. 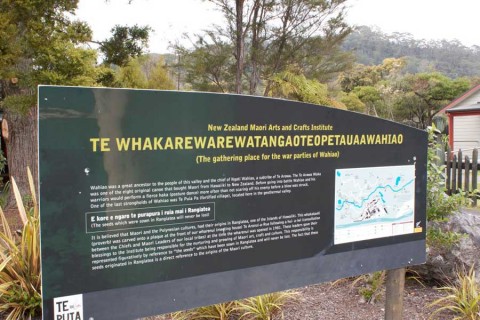 The Pohutu geyser is the main attraction and it was erupting when we first saw it. Unfortunately is was our first grey day since touring around the North Island of New Zealand so the whitish water of the erupting geyser against the whitish grey skies it wasn’t very photogenic whilst we were there. Pohutu, means big splash or explosion, and erupts up to 30 metres high, depending on her mood – Today it was probab;y only 10-15 metres high. It is the largest active geyser in New Zealand and the southern hemisphere. 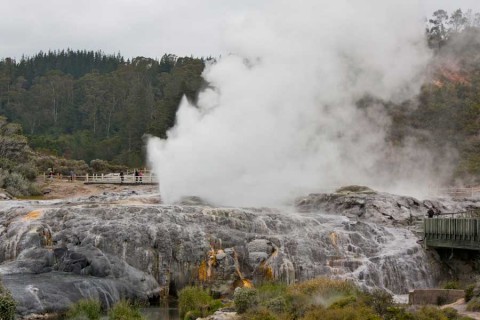 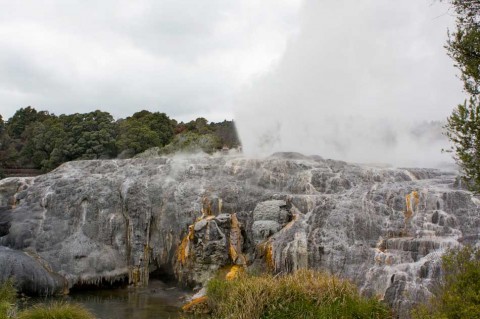 The bubbling mud pools were nice to see and we decided that the little bubbles of mud should be called ‘glumps’. Capturing photos of them in action isn’t as easy as it would seem though.

Patterns in the Mud

The other various pools and geothermal features are interspersed with maori carvings and various information boards.

Anna and Morgan at Te Puia

After wandering around for a bit we stopped for lunch at the cafe and then visited the kiwi house where we had a good view of a couple of kiwis rummaging for food in their nocturnal enclosure. We were then going to take a look at the carving in action and maybe have a look around the Meeting house and such like, but somehow we ended up in the gift shop by mistake and there was no way back into the main park, just an exit past the tills. We probably could have got back in had we insisted but the whole thing was a little too commercial for us and felt a little faked. We’d seen plenty of hot pools, bubbling mud and geothermal features anyway and the ones we had seen outside of a big visitor attraction had been better anyway.

We then drove into Rotorua which was much more of a city than we were expecting. I was supposed to be doing a bike race here on Sunday called ‘Bike The Lake’ that would circumnavigate the lake. So after letting Morgan have a little play in a playground on the lake-side we drove around the  lake in a clockwise direction.

Lake Rotorua is the second largest lake in the North Island of New Zealand by surface area, and covers 79.8km2. It only has a mean depth of 10 metres though. The City of Rotorua sits on its southern shores. The lake was formed from the crater of a large volcano. Its last major eruption was about 240,000 years ago. After the eruption, the magma chamber underneath the volcano collapsed, leaving a circular depression of the Rotorua Caldera, which is the site of the lake.

The drive around the lake was less scenic than we had expected, but it gave me a chance to see what the course for the ride was like (even if we ended up going the wrong way around). I’d hoped the race was going to be a nice scenic tour around the lake, but the road was fairly built up all the way around and didn’t really afford many views of the lake itself either.

We weren’t really that impressed with Rotorua so far – we much prefer the quiet, out of the way places with nice scenery and less people, so it was back to the Waikite Valley campsite and another huge slice of their amazing carrot cake. Morgan and I went for a swim in the pools whilst Anna had a snooze. We had dinner in the pools cafe again, this time a ‘Family Treat’ which turned out to be a big plate of deep fried things! 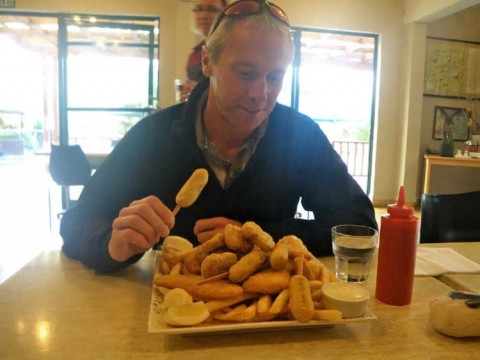 We then took another stroll along the steaming valley of the boiling river – we still couldn’t get over just how hot and steamy this valley is before having another family soak in the pools to relax us before heading off to bed in the camper. 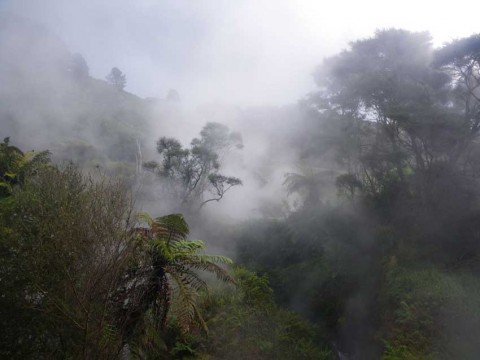