It’s all happening this weekend

First up, it’s the Dyfi Enduro on Sunday. I’ve known about this for months, but that doesn’t mean that me or my bike is ready for it. However, I can’t get out of it now, I’ll just have to do the best I can and aim to enjoy it.

It won’t be helped by the fact that the wind is forecast to be a strong NE. This will not only make it pretty hard going on the day, but will also mean that with the help of Ivor, our local katabatic wind, I’m likely to be out on the water beating my body up all day Saturday in an attempt on my ‘Life Begins at 40 Knots’ challenge. I shall be battered, bruised and aching before I even start the Dyfi Enduro.

It should be a good weekend though, dominated by ‘extreme’ sports and recreation – or so I thought until last night when the phone rang…

“Hello, it’s Jim, your bees are ready can I bring them round tomorrow evening?”

It was Jim, the local beekeeper we are getting one of our nucs from.

“Ummmm….” my brain was working overtime, the hives were ready, the frames were made up, we were ready, why not… “OK, we’ll see you then”.

Arrangements had been made. Jim would bring the nuc (a box of five frames complete with mated queen, around 10,0o0 bees, brood in various stages of development and some stores) around at dusk on Saturday and would then transfer the bees into the hive for us. We just needed to be here with the hive ready to go. We started to get excited. There were so many questions we hadn’t asked and didn’t know the answers to. Would we need to have our bee suits on? Did he need us to have the smoker going? Were we ready for 10,000 bees?

We then realised that our first ever manipulation of our bees was going to be done in fading light, possibly by torch light. Oh well, with Jim there to do it for us it would all be fine. To be honest we were quite relieved to hear that Jim would deliver the bees to us and help us transfer them from nuc to hive. It would be good to see him do it so that we’d know how to do it with the next nuc and we were about to become real live beekeepers… And then….

“Hello, it’s Bill, your bees are ready can you collect them tomorrow evening?”

It was Bill, the guy we’re getting our other nuc from.

“Ummm, no, we’re out tomorrow”. Bill was out on Saturday himself so said we could wait until early next week but then I worked out that we were out for dinner tomorrow evening at a friends house which is just up the road from Bill’s. We could collect them on the way home. The plan was made, we’d collect them on our way home on Friday evening.

And then the realisation set in. Why did I ever suggest that? Now we’d be collecting our bees from Bill less than 24 hours BEFORE Jim arrived with his. We’d have to transfer the bees from Bill’s nuc into a hive BEFORE seeing Jim (a master beekeeper) do it for us. Should we do it as soon as we get them home under cover of darkness in the same was as Jim had proposed?

We thought about it for a while and decided that would be a ludicrous idea. There were just too many things that could go wrong. Our first ever colony manipulation, smokers, bees suits, 10,000 angry stinging insects and three complete newbies (one of them 6 years old) in the dark with torches, hive tools and no idea of what they were doing? That really was asking for trouble and didn’t bear thinking about. Instead, we’ll leave them in the nuc box until Saturday afternoon and transfer them then when the light is good and we have plenty of time. Of course, the howling NE wind that we are expecting isn’t going to help, but there’s little we can do about that. Hopefully it will ease in the afternoon and all will go well.

It’s certainly going to be a busy weekend! 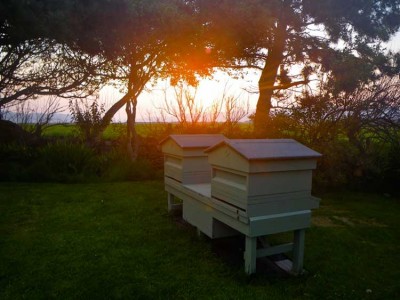 The Sun Rises on Our Beekeeping Career