I had another really good windsurf session yesterday. The wind was NW at about 20 knots so I went out on my big board (104 ltr Starboard S-Type) with my 5.6m Gun Nexus sail from the seafront. That was perfect, just the right amount of power for some fast blasting but completely in control and comfortable.

Instead of the usual sailing back and forth over the same bit of water that I normally do, the fact that I was on a bigger board, with a bigger fin (30cm) and therefore had more upwind ability I decided to head upwind towards Aberdovey. The upwind stretch was nice and it meant that I had to contend with lots of different sea conditions on my way. 1-2 foot surf near the shore at Ynyslas, rolling swell and chop further out, then short sharp chop over the Dyfi Bar followed by the flat waters of Aberdovey.

Once over towards Aberdovey the wind eased off quite a bit. It was fine on the way there but once I gybed there was little wind to get going again until I was back out into the channel. I therefore had a couple of runs on the Aberdovey side before heading back on some mad downwind runs back over the bar to Ynyslas.

I didn’t have a huge amount of time as I had to go to circuits and swimfit so I only stayed on the water for an hour and a half, but covered over 23 nautical miles with an average speed of 15.76 knots. You can see my route below and as you can see I hit a maximum speed of 27.2 knots on the downwind run from Aberdovey, just as I crossed the flat water to the lee of the bar. 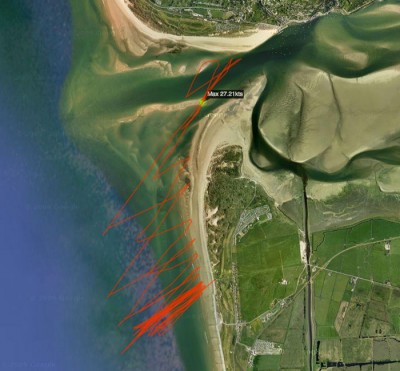