The Waters of Ynyslas – A Surf Ski Adventure

That was an exciting morning on the waters of Ynyslas. Magic Seaweed was forecasting 5-7 foot surf with a 14 second period. The wind was very light offshore. I waited for it to get light and then headed over to the beach for a surf ski in the biggest waves I’ve paddled so far.

Big Surf on the Seafront

Unfortunately by the time it was light enough the waves were already crashing onto the pebble bank so the tide was a little too high really. I decided to give it one quick go so paddled out into the big surf. It was pretty big out there but with no wind and a nice long period swell it was just about manageable. I didn’t feel like falling off and having to swim though as my ski would have got smashed onto the pebbles. So, after a quick paddle out I turned around and took a cautious paddle back in before deciding that enough was enough after just 10 minutes.

Surf on the Seafront

I headed home, put the ski on the roof of the camper and headed to the estuary.

With a big tide predicted, I dropped my ski of in the estuary and then parked my van in the Visitor Centre Car Park so that it wouldn’t get swamped by the rising tide. I then headed off into the much calmer waters of Ynyslas in the estuary. There was some chop to keep me on my toes in the estuary itself and the wind was picking up so despite having the incoming tide helping me out I was battling against an ever increasing wind. It was forecast to pick up as well, so rather than head out across to Aberdyfi or too far into the estuary I headed off to the River Leri instead. 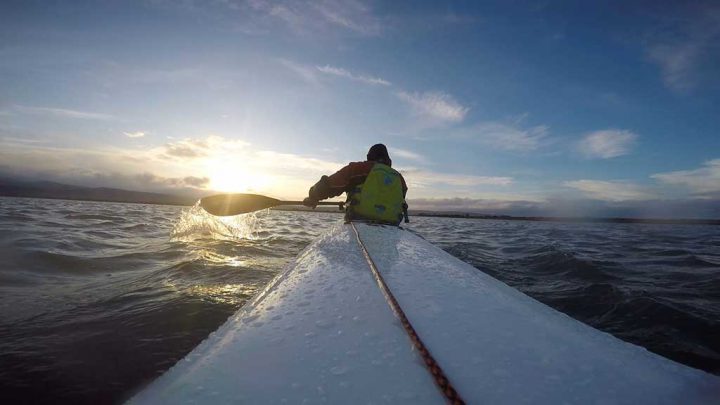 There quite a current running under the bridges into the Leri. Once in the Leri and out of the wind though the waters of Ynyslas were super calm. With the current behind me I was flying along. Huge flocks of Geese were scattering before me and other diving seabirds disappeared beneath the mirror smooth waters as I approached. I couldn’t stay in here too long though as the rising tide might prevent me from fitting under the bridges later on. I therefore turned around and headed back against the current and out towards the estuary again. 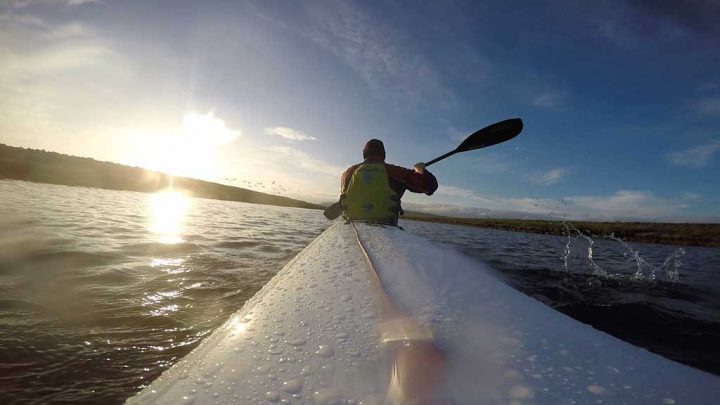 This time I headed off towards the mouth of the estuary where the big swell was sending runners way up into the estuary. I was going to go play on them but the wind was picking up considerably now, gusting to 35 knots and making things quite a handful. I decided it was safer in the confines of the estuary rather than out in the mouth of the estuary and so headed back to the Leri where I met the Borth Rowing Club. After a quick race with them (which I won!) it was time to head home with a nice tailwind back to the beach where a kite-surfer was making the most of the wind.

A nice couple of hours on the varied waters of Ynyslas with a bit of everything!