Windsurfing – What a Silly Sport

Windsurfing really is a silly sport! Regular readers of this blog will know that I’ve set myself a challenge of reaching 40 knots before I hit the big 4-0. To that end I’ve bought lots of new toys in order to do it, but since buying them all there hasn’t been any wind so I’ve as yet been unable to test them.

Mountain Biking is so much more sensible. You get a bike and can use it whenever you want!

Anyway, there was finally some wind today. Not a huge amount and in the wrong direction for my new speed kit but I did at least get out on the water. The wind was very gusty and the first half an hour or so was spent trying to get going and losing lots of ground downwind. If I did get going in a gust I then had to use it to gain some ground upwind so it wasn’t a great start!

After a walk of shame back up the beach, the wind did fill in a bit and i was bale to have a good 40 minutes or so well powered up in decent winds. I did take my GPS out with me even though it wasn’t a speed session. It was never going to be fast as I was on wave kit not speed kit and sailing on the sea front in the waves and chop. I thought it would be interesting to compare though.

Here’s my GPS track from the second half of the session. 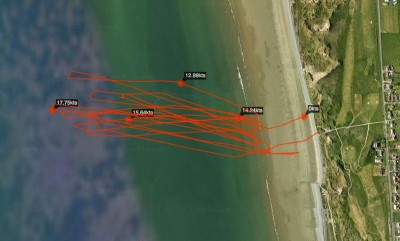 Top speed was only 22.33 knots. I guess that just shows that I really do need different kit and different conditions to get anywhere near 40 knots! GPS details of the session can be seen on sportstracklive.