The conditions were just too good to miss once again today. Sunny spells, 20-30 knots SW winds, warm waters and 3 miles of sandy beach. I just had to go windsurfing. My foot was feeling quite a bit better after a couple of days relative rest to allow the wound to heal. It wasn’t fixed mind you but a couple of plasters and several feet of duct tape to hold it together should prevent it from getting any worse. With that sorted it was on with my summer wetsuit, wetsuit boots to further protect my foot and then off to the beach.

It wasn’t forecast to be crazy windy today and it didn’t feel ballistic at home so I took my biggest board (104ltr Starboard S-Type) and my two biggest sails. Once on the beach though it was clear that it was actually quite windy. The big board was going to be a handful and the bigger sail wasn’t going to be needed. I rigged the 5.7m sail and flattened it off as much as I could so as to depowert it somewhat. I put the smaller of the fins that I have for that board on and made my way down to the water.

Once on the water it was full-on from the word go. I was well powered, there were some decent messy windblown waves everywhere and no let up. The board was indeed a little too big for these conditions but I couldn’t be bothered to go back to get a smaller one so I just went for it and held on for the ride. It was quite a handful but that just made the whole session even more of a full-on adrenaline rush. I held back on the jumps a little as the board feels a little heavy and cumbersome in the air but it was difficult to keep it on the water at the best of times. I had to really muscle it through the turns too. 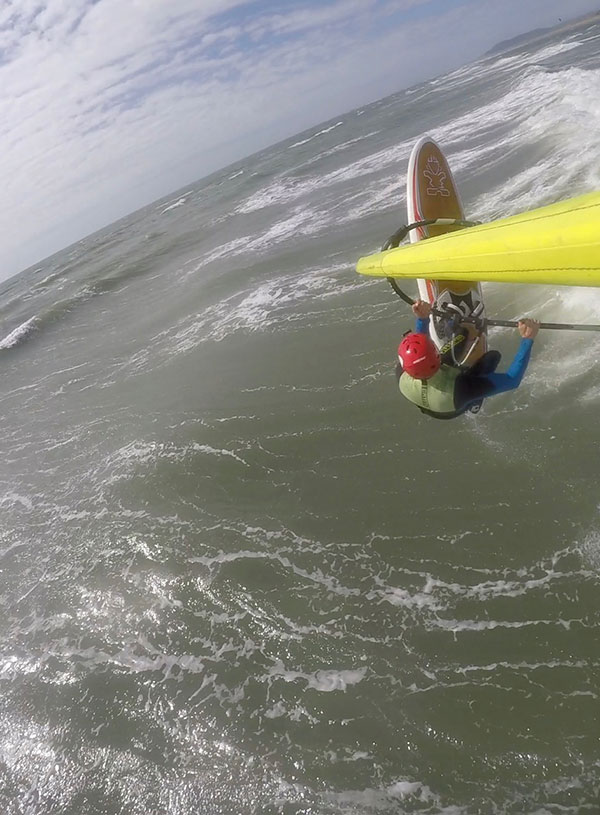 It was super physical the whole time. Jump on, burst through some little waves of whitewater, launch off a wave, land, bear away, launch off another wave, weave my way through some choppy confused waters, fly off the larger swells out the back and hop up and over walls of whitewater. Power through a gybe out the back, stuff my feet into the straps and then hang on for the ballistic speed run back towards the beach. Ride a few waves, smack the lip, power through a flat out gybe in the shallows and then do it over and over again. There simply wasn’t a single second in which to relax. What a session!

Despite having 4 or five layers of duct tape around my foot and wearing boots the foot protection didn’t last long. Unless you’ve windsurfed in conditions like these you don’t realise just how physical it is. Everything takes a beating and there’s just no easy options. The duct tape didn’t stand a chance. It held up fairly well considering that almost all the power is transferred through your feet to the board but it had peeled off by the end of the session. Thankfully it seemed to just about do its job and my foot is no worse for the experience. What a session!