Last year we had a few fairy lights around some of the door frames in the hall. At the time I said it would be nice to have LED’s around all of them for the festive season, so with Christmas approaching I decided to look into it.

We’ve had strips of remote controlled RGB LEDs for a while now. I have some behind my aquarium that simulate sunrise and sunset each day. Morgan has a whole strip of them all around his bunk bed. They work well, use up very little energy and would be just the thing to brighten up the hall for Christmas.

After measuring up, it worked out that we would need 50m of LEDs. It’s not that our hall is massive, but with 9 door frames to go around it soon adds up. I took a look around but these were going to cost something like £130. Quite a lot to spend just for Christmas lights. I tried to talk myself into it by saying that we could have them lit up in festive colours at Christmas and then leave them up all year round and use them in white mode as lighting for the hall. A good idea, but I didn’t really want to be able to see the strip of lights themselves and with them stuck to the skirting boards and door frames they would be visible when not on. I had to hatch another plan.

My next idea was to install them around the ceiling of the hall. This would put them out of sight somewhat and would mean that we only needed 20m of lights, not 50m which would save around £60. Things soon developed a little from there of course. Rather than just have them stuck to the coving of the ceiling itself I decided that it would be better to install a picture rail style plinth all around the edge of the hall into which the lights could sit. This should mean that the light strip itself was out of sight completely and that the lights would shine upwards creating a glow on the ceiling. It might not be quite as festive as lights around each of the door frames but we can have them in a red and green flashing mode for Christmas and a nice tasteful colour the rest of the time. The set we’ve ordered even have Bluetooth so that they can be controlled from a phone app.

As usual with my ‘great ideas’ they soon escalate. A simple set of lights around the doors had now become a complete hall redecoration. I was off to the builders merchants to buy wood and soon set to putting up a narrow picture rail all around the hall. The £60 we’d ‘saved’ on lights had now been spent on wood and fixings. The idea was to paint this picture rail the same colour as the walls so that it would blend in somewhat. That of course meant that the entire hall had to be re-painted. We decided that the wall above the picture rail should be the same colour as the ceiling, so the ceiling had to be painted too. Off I went to the hardware store for paints. So much for this being the cheaper option. Although to be fair, it was time to decorate at least one room as we hadn’t done any this year.

While we were at it, it was finally time to tackle the sanding and varnishing of all the door frames too. This has become something of a running joke here as they have never been done since we built the house 15 years ago! I guess by doing them we can say that the house has finally been completed. It took 9 weeks to go from a rough grassy field to a fully wind and water-tight house that we could live in. It then took a further 15 years for me to finally sand down the hall woodwork. Although I did notice afterwards that I don’t appear to have ever sanded the woodwork in the bathroom either, so it’s still not quite finished.

The weekend was spent cutting and fixing the picture rail to the walls, sanding, cleaning, painting and varnishing. It does look nice now that it’s done though. 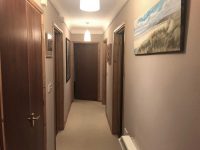 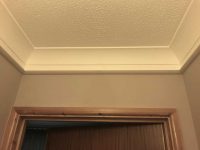 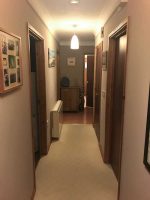 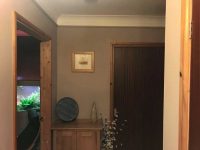 The escalation didn’t stop there. With the walls and ceiling done it was time to tackle the floor. The carpet needed replacing and the laminate by the front door was just some laminate we had put down after initially building the house, As with all things that we did after building the house it was done on a budget as we had no money leftover from the house build and now had a hefty mortgage to pay so it was time for an upgrade.

Having lived here for 15 years we decided that it would actually be quite practical to have laminate flooring throughout the hall. We have people coming around to measure it and price up some options for us this week. No doubt that will be the most expensive part of this project so far. I say ‘so far’ because if we’re having the floor ripped up then we might just have to have underfloor heating installed as well. Hopefully we’ll have an electrician out to price that up for us as well. These Christmas lights around the door frames could get more expensive yet!

Now that we are back to the lights, they’ve yet to arrive so I can’t even show you what they look like. I’m just hoping that they fit onto the picture rail OK and look good up there!