Another weekend has gone and this one was a Bank Holiday Weekend – Although I’d kind of forgotten that as they all seem to roll into one these days. I also work from home on Mondays and Tuesdays every week so Bank Holiday Mondays don’t mean much to me.

The weekend was action packed as usual and started on Friday as I have been taking every Friday off over the summer as well. It does mean I don’t have a proper long holiday, but it does mean I only have to go into work on Wednesdays and Thursdays which is quite nice. I could definitely get used to a 2 day week!

Having not blogged about it yet I’ve almost forgotten what we got up to but it did start with an early morning windsurf which I’ve already shared a video of. According to my training diary I also went off to the beach later in the day for a run and plyometrics session. No doubt I did lots of chores around the house as well, and I seem to remember cooking up a nice spicery curry. A Pathia I think complete with lots of side dishes. Mmm Mmm!

Saturday started with an early morning potter around the house waiting for Anna to wake so that I could get on the turbo trainer. She was awake quite early though and sent me a message to let me know. So, I was soon puffing, panting and sweating my way through a VO2Max interval session. 2 rounds of 10×30 seconds VO2Max Intervals which was quite a task. My legs were a little sore after that.

Next up was a trip into town so that Anna and some other members of the Aberystwyth Silver Band could play some tunes outside John Davies Jewellery Shop in town. T.J. Davies & Sons were celebrating 70 years in business so the band played Happy Birthday and Congratulations a few times as a surprise to them. 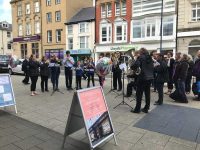 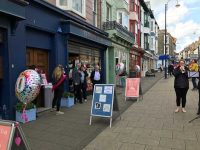 John outside his shop 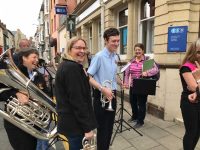 They didn’t play for long. In fact, the set up and planning to make it a surprise took longer but John seemed to like it so we all hung around for drinks afterwards.

Anna and I then headed off to M&S to do some clothes shopping for Anna and for brunch in the cafÃ©. Morgan was at home all morning as he had to work at midday so had an excuse not to come with us.

We were back at home by the early afternoon so I headed out for a nice surf ski session. The sea was still fairly rough so I had some fun in the waves as I headed up towards the estuary and then had a nice downwind run into Aberdovey and up through the low tide channels to the big house with the little island in its garden. I then headed back into the wind and tide before playing in the waves off the seafront once again.

It was pretty rough for surf skiing really but I did OK. I’m definitely getting better and more comfortable in the ski, even in more challenging conditions. I think I may have reached a plateau as far as speed is concerned though.

The rest of Saturday was spent chilling at home.

I had a mountain bike ride and trail run planned for Sunday. A friend of mine from Bristol called Martin was in the vicinity and had said that he would be riding at Coed y Brenin on Saturday and then Nant yr Arian on Sunday. I couldn’t meet up with him on Saturday so decided I would on Sunday. I also decided that a trail run could be tagged onto my ride as well. As Sunday approached though the weather was looking atrocious. I wasn’t convinced that Martin would still be up for a ride after having had a nice dry one at Coed y Brenin and he wasn’t sure himself either. As usual I was up before 5am on Sunday and it was still dry. I decided after a while that I may as well get out early on my own before the rain set in. If I waited around it was likely that Martin wouldn’t be going anyway, and likely that I would find excuses not to go once it got really miserable as well.

Of course, as soon as I made that decision the rain started. It was only light as I loaded up the van but by the time I got to Pendam the windscreen wipers were on. It was cold, wet and windy so I didn’t hang around for long, just headed out on my bike. I haven’t been mountain biking much lately so it was nice to be out even if it was miserable weather wise. It was barely light, my feet were soon soaked through and cold and before long I was drenched. The rain continued to get harder but as I finished a lap of the Pendam Trail I decided to go around again anyway. With lap 2 done and still not having seen a single person I did a couple of laps of the lake for good measure and then headed back to the van.

I was now as wet as could be so jumped into the van to get changed into some dry running kit and then headed off into the wind rain and gloom for a trail run. At least the running warmed me up a little better than the riding did, but the rain was getting even heavier. I didn’t really think that was possible but the weather always has a way of surprising you. I also didn’t think it was possible to get wetter than I had on my ride, but indeed it was. For some reason when I run in the rain my shorts foam up. I assume it’s residual washing powder in them but I soon had streams of soapy suds running down my legs that mixed in with mud to form brown streaks of bubbles. Water was pouring down my face as I ran into the torrents. At times it was difficult even to breathe through it.

I was thoroughly drenched when I got back to the van after an hour of running. It’s at times like these when the van is a godsend. In I jumped to get dried off and changed. I could have even made myself a nice hot chocolate had I wanted to. It was still only about 10am though so I thought I’d head home, shower and then head out for brunch with Anna.

Guess what? By the time I drove home the rain was easing off and before long it stopped completely. Typical!

Brunch and some Work

We dropped Morgan off at work in the chip shop and headed into Borth. We couldn’t decided where to go for brunch so tried the Sands Bistro. I was nice in there. The food was good and we were served by one of our old Scouts. It was good to see her grown up and almost heading off to University! It wasn’t the cheapest of places to eat though, even if the bacon, brie and cranberry panini was very tasty.

We didn’t do much else after that. Chores around the house, Anna baked some scones which we’ve all eaten. I then had to work from 7pm-11pm so after dinner spent the evening working. I suppose I shouldn’t complain as I arranged it and I have plenty of opportunity for recreation but it’s still a bit of an inconvenience this working malarkey!

As I said, I’d forgotten it was a bank holiday so Monday started with my usual morning turbo trainer session while waiting for the tide to drop. It was just an easy session today with 5x 90 secs at lactate threshold – taper intervals ready for a race at the weekend. Once the tide had dropped I headed to the beach for a windsurf. It was now that I remembered it was a bank holiday as there were quite a few kite-surfers on the beach as well. I usually have the place to myself, but not on Bank Holidays!

I rigged my 5m sail but felt as though the wind was dropping so changed to my 5.7m before even getting on the water. It turned out the be the right decision as I had about 40 minutes perfectly powered up blasting around in some fairly chunky waves. The wind was quite onshore so not much opportunity for jumping but there were some nice bits of whitewater to smack and a few nice little wave rides. The wind started to ease a little too much after a while and there were a couple of occasions where I felt as though I needed more power so I decided to call it a day before I ended up with a walk of shame.

It’s Monday afternoon as I write this so the Bank Holiday weekend isn’t over yet. We’re off to the cinema later and I think we are all off work tomorrow as well. I don’t know what we’ll do yet but more time on the beach sounds good, as does biking and brunch!