Another Activity Weekend in North Wales

The fact that things have been organised so that the Colwyn Bay Ski races and the Llyn Padarn Kayak Time Trials occur on the same weekend makes it worthwhile making the 2 hour trip to North Wales for me. Not that the 2 hour trip to North Wales isn’t always worthwhile. It always is and the journey itself is nice, especially as the mountains start to close in around you and the snow-capped peaks start making their presence felt. It also gives me an excuse to have a night in Ramsey our camper van too.

It was pouring with rain all the way there on Saturday morning, but the skies started clearing as I descended from the Crimea Pass north of Blanaeu Ffestiniog.

By the time I’d reached Colwyn Bay it was glorious sunshine, blue skies and calm seas. 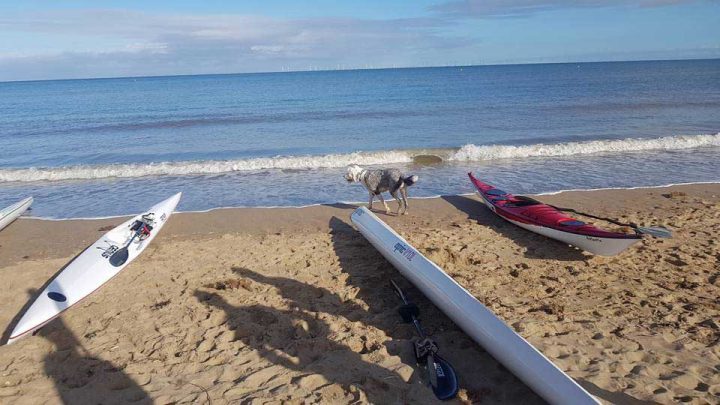 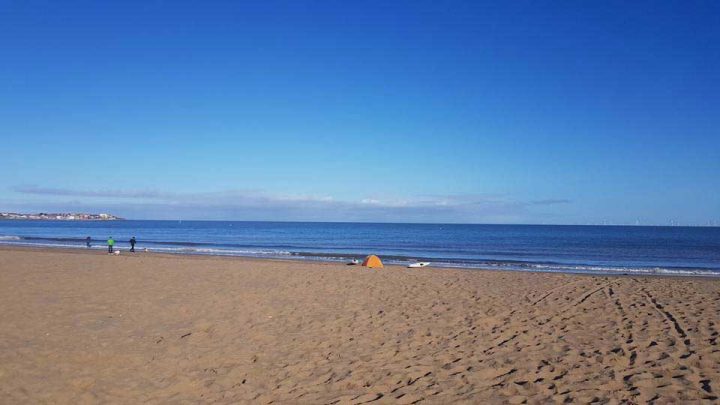 [Photos courtesy of Martin as I was too lazy to take any!]

Martin was already out paddling as he would be time-keeping for the races. The rest of us got ready and soon we were on the water for the first of two 5km races. 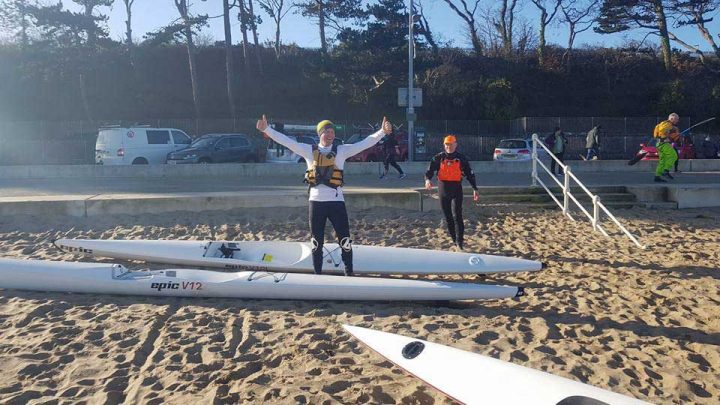 As before, the first was a ‘mass’ start. I soon settled into 3rd place with Jamie way out in front and Stephen just ahead of me. What I didn’t realise was quite how close Mike was behind me! As usual, the buoy took longer to get to than expected. There was a little bit of chop and small swell but nothing to worry us as we rounded the buoy and headed back to the beach.

Once everyone was back and layers were discarded as the temperature increased. We had a little break and then headed off again. This time handicapped so that we could all finish together. As last time, I was quite pleased not to be last and to be ahead of people who were easily beating me this time last year. Maybe I have improved a little after all!

Once changed it was off to the cafÃ© for coffee, cake and a chat. There were prizes again too, a paddling hat this time! As this is a series of races Martin worked out the overall standings and I’m hanging on to 2nd place – only because I’ve done both races so far whereas Jamie, the winner today has only done one! Here are the standings so far:

Ben and I then headed off to Dolgarrog where we had planned to recce the run route of the Fabian 4 Mountain Challenge. Ben had done it before so vaguely knew the course, I didn’t know quite what to expect. We started at Surf Snowdonia where a rally was taking place. We made our way along a track to the kayak to run transition area and then started the run route proper. After a brief flat, muddy section away from the river we crossed the road and headed very steeply upwards. On and on the climb went without relenting. Eventually it levelled off somewhat after what had been a 900 foot climb over the course of a mile. It was still uphill from here though as we followed a drainage channel and then a huge water pipeline up to the Llyn Colwyd reservoir. After another 3 miles of gentle climbing we reached the dam, crossed it and then headed steeply up again, this time over rougher wet ground over the ridge and into the next valley.

The weather was perfect, chilly but sunny and with just a gentle wind up here in the hills. At the 5.7 mile mark we reached the top and started a steep descent over grassy moorland first and then down through woodland tracks and paths to emerge 3 miles later in Trefriw. The actual Fabian 4 route then continues on around another hill and into Llanwrst.

We however had to get back to our vans so we headed along the flat road to Dolgarrog. By now the rally cavalcade had left so we had a quiet car park in which to get changed. It was a tough run. 11.5 miles in total and I was tired before I started! I was looking forward to my liver and onions meal at Pete’s Eats!

A night in the Camper

After a wash and change, I headed off to Llanberis where I parked on the shores of Llyn Padarn and chilled for a while with a cup of coffee before wandering into Llanberis for the much anticipated liver and onions.

After queuing for ages I discovered that they were out of liver at Pete’s Eats so plumped for a lamb burger instead. Once it arrived I think it was actually a ‘dragon burger’ by mistake but by now I was starving so just ate it anyway. I only noticed at the end that the coleslaw it was supposed to come with was missing as well! Oh well, not quite the meal I was looking forward to but it had filled a hole.

Once back at the van I settled down with a book, more coffee and a double decker before snuggling down for the night. Actually there wasn’t much snuggling needed as I was too hot to sleep most of the night. 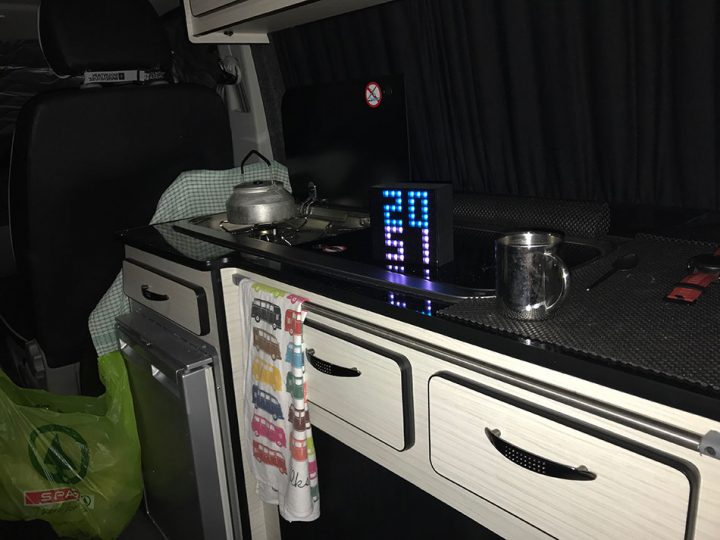 Chilling in the Camper

Sunday morning was a chilled start for me just breakfasting in the van and watching the word go by. It was a mild day with very little wind so the lake was calm and looking perfect for the time trial. 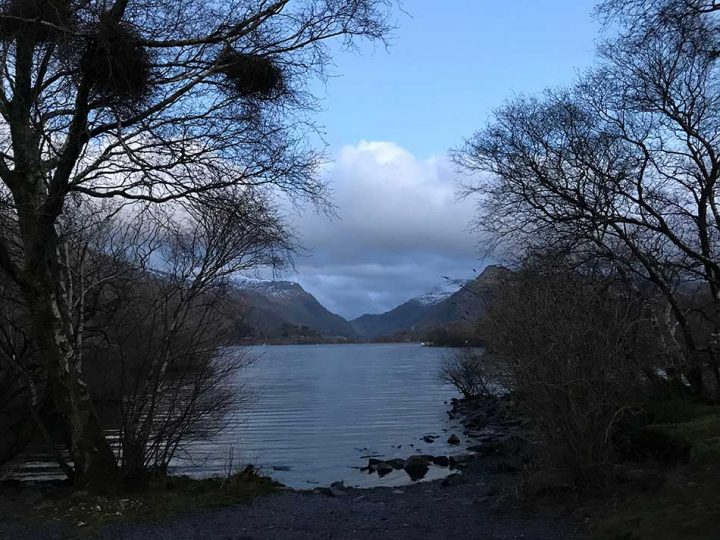 Llyn Padarn in the Morning

As people turned up I chatted and got ready and we all headed off across to the other side of the lake ready for our handicapped start times. The wind had picked up a little by now but was still quite light.

I set off on the time trial with Kevin some 8 minutes behind the first starters and with Geoff, James and John behind us. I soon pulled out a bit of a lead over Kevin but he hung onto me and I was surprised to see him right behind me still at the turnaround point. It was into the wind on the way back though and my fitness paid off here as I pulled away from him. Afterwards James had said that I’d been pulling away from him on the way back as well. According to Chris who was timing us I’d put in a PB of 28:52. Not too shabby!

Coffee and biscuits back at the shop were followed by a nice drive home through Wales at the end of another good weekend away. The van could do with a bit of a clean though. 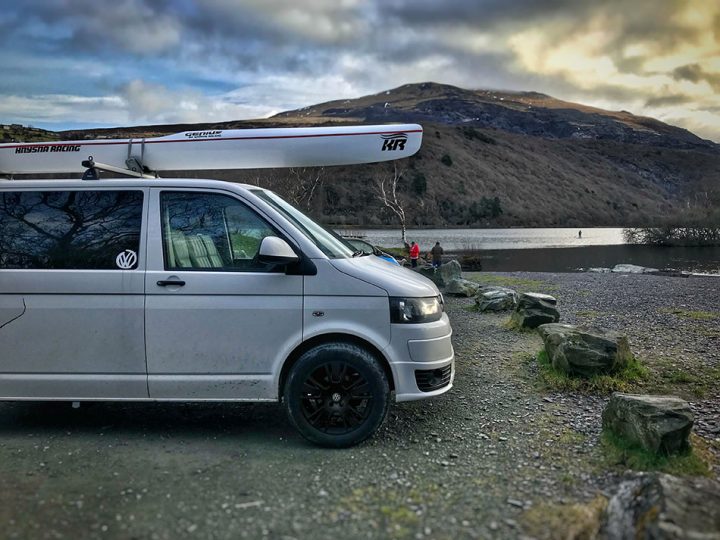