What a mountain bike that is! 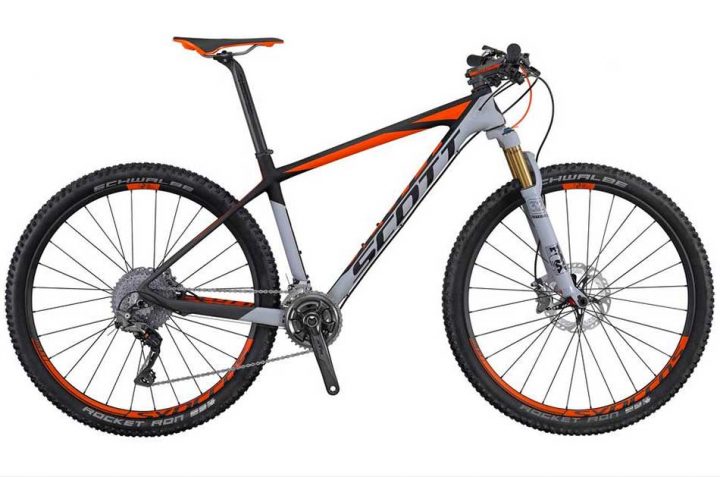 I’ve just got back from the maiden voyage on my new Scott Scale 700 mountain bike, and she’s a beauty! Light, agile, responsive and direct. It’s going to take a lot to get me out on my full-sus bike again as I’m sure I prefer my bikes like this rather than the weighty, wallowy feel of a more bouncy bike. That said, I didn’t do anything too extreme on it today. Mainly road and fire-tracks with a few muddy rooty descents and one little flight of muddy steps.

My nice shiny bike wasn’t quite so shiny by the end of it of course, but it’s now been washed and polished so that it can come back into the house. 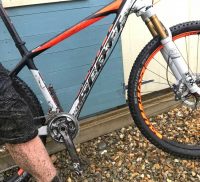 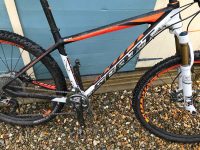 This new baby of mine may have been unplanned, but it was delivered at around 2pm on Saturday weighing in at just over 9kg. Unplanned because I didn’t really need a new bike and certainly hadn’t been in the market for a new mountain bike. It all came about because I was invited to race for the Scimitar Sports Endurance Race Team. Scimitar Sports make high quality, performance custom sports clothing and are putting together a team of cyclists to promote their business. They’ve pretty much given me free reign over which races I do, allowing me to compete in the British Quadrathlon Association Trophy Series again in 2018.  However, the other team members are also doing some longer mountain bike races, including some 12 hour events. I thought that these sounded like ‘fun’ so decided to do some of them as well.

As I was signing up for these Chris, another member of the team, sent me a message about a new bike that he had just bought for such events. It was a Scott Scale 700 that he got at quite a bargain – £2400 instead of £4400. That’s a lot of money for a bike, but it’s a lovely super lightweight race orientated mountain bike perfect for such events. It may be a 2016 model, but the new models which are exactly the same but a different colour are selling with a RRP of £4800!

I had a quick look at it whilst thinking about the mountain bikes I had: A heavy, quite old full suspension Commencal Meta 5.5 and a fun, trail orientated Whyte 901. The Commencal is far too heavy for long distance endurance events and the Whyte was in need of some TLC following my ride in the Tide to Tide earlier in the year. The Whyte would be OK for such races once it was fixed but it wasn’t ideal and I’d have no chance of keeping up with Chris on his shiny new steed.

I didn’t have £2400 to spend on a bike though. However, as I was looking another deal popped up. It was the next bike up in the Scott Scale range, the Scott Scale 700 Premium. It had the same, super lightweight frame. It had different components (Shimano XTR throughout rather than a mixture of XTR and SRAM X1) and a 2×11 chainset rather than a 1×11 chainset. It had Fox 32 Float Factory Air forks rather than the almost identical Rock Shox SID RL3 Air and it had similar wheels and the same finishing kit throughout. The extra gearing meant that it was about 500g heavier, but the RRP was also £500 more at £4899 (for the 2016 model) or a whopping £5499 (for the 2017 model). I however found an absolute bargain on the 2016 version at £1999. On top of that I had an extra 10% off at checkout, plus a voucher code for £50 bringing it down to £1749.10. I could have had an extra 3% cashback had I remembered to go through Quidco to buy it which would have taken it down to £1696.63 but I forgot to do so! Even so, with a saving of £3750 it was an offer that was difficult to refuse. Sure enough, it was soon ordered and due to arrive on or before my birthday.

I was able to track it online. It had made it to Shrewsbury on December 8th. My birthday on December 11th came and went and there was no sign if it. It was still in Shrewsbury and hadn’t moved. There had been snow though so I gave the delivery company the benefit of the doubt. Still no sign of it the following day so I rang Westbrook Cycles who I’d bought it from. They chased Parcel Force and were told it would be with me on the Wednesday.

Yep, you’ve guessed it, Wednesday came and went and still no sign of it. More phone calls and Parcel Force were supposed to phone me back once they found it. They didn’t do so and it didn’t arrive on Thursday or Friday. I was getting worried now. Had it got ‘lost’ in the post? Had someone somewhere along the lines helped themselves to a very nice early Christmas present? Where was my bike? Westbrook Cycles were doing their best to track it down for me and had of course assured me that I wouldn’t end up out of pocket. That didn’t really help though. I’d set my heart on this bike now and it was a never to be repeated offer, so if it didn’t turn up I wouldn’t be able to get anything like this spec for that price and there were no other offers like it. I did start thinking that I’d have to spend an extra £650 to get the same model as Chris (there was at least one of those still available – but for how long?)

I phoned the bike shop again on Saturday morning and they were chasing Parcel Force yet again. Eventually at around 2pm a little Royal Mail van turned up outside our house and there it was. Saturday afternoon was spent building it and drooling over it and then on Wednesday morning I finally got out for a ride on it. Here’s to many more fun rides and hopefully some good races on it.