It was my Mum’s 65th birthday on Friday so rather than have a traditional birthday party we all got together at Bluestone in Pembrokeshire. When I say all, that’s her descendant family – Children, Grand-children and Great Grand-children. There were a couple of us missing due to work commitments but even without Jennie and Megan there were 17 of us:

We all met on Friday evening after school and work and settled into our lovely Bluestone lodges for the weekend. 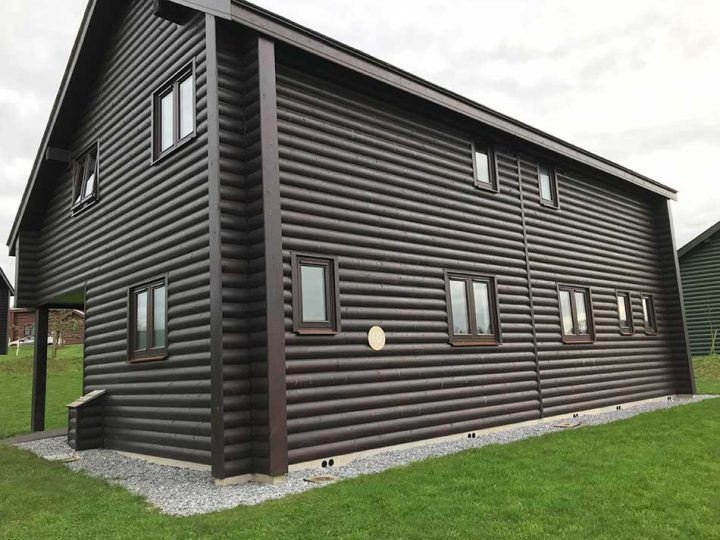 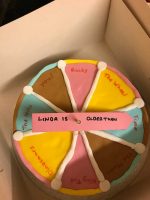 Bluestone park itself was dark and cold but really well laid out and looked nice. We had hoped to pop into the pool in Friday evening but by the time we had got there, sorted out our rooms, had some dinner and chatted there wasn’t really time. The lodges themselves were huge with nice high ceilings, large rooms and comfortable beds. It was all spotlessly clean too. After a fairly informal, slobby dinner of pizza and garlic bread we presented the birthday cake we had made to my Mum. Everyone thought it was pretty funny but for some reason my Mum thought we had bought it – So much for Morgan and I slaving away the night before to make it!

We tried to make a fairly early start the following morning but mustering quite so many people, especially teenage boys is never easy. We did get everyone going eventually. 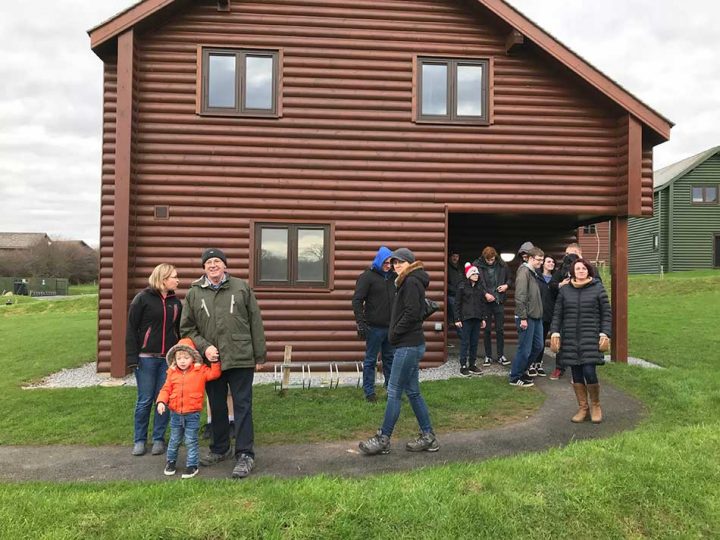 The Blue Lagoon is only open to residents in the morning so it was fairly quiet in there.

We then all met up for lunch before heading off to the Bluestone Adventure centre for a round of crazy golf and for the children to play on the climbing frames. 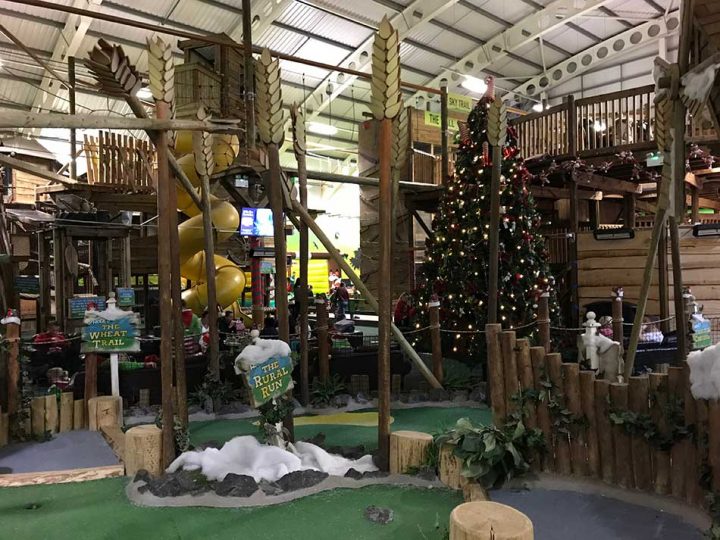 The Adventure centre was a little too hectic and full of people for our liking though. We therefore soon headed off for a little walk around the grounds. A few of the boys headed off into the woods to explore ‘Camp Smokey’ which was closed for the winter. 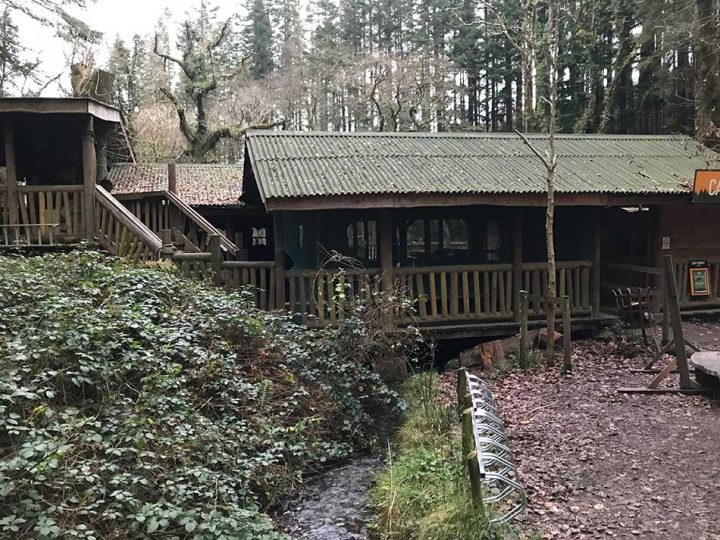 After a quick change at the lodge it was then off into the Bluestone Village to watch the turning on of the Christmas lights followed by a lovely dinner in the ‘Knights Tavern’. 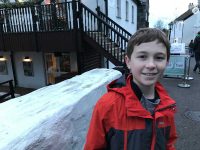 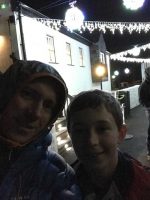 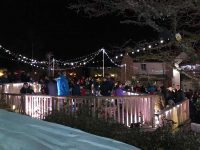 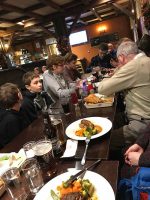 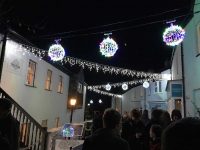 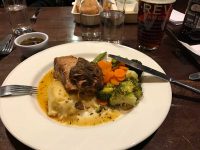 I was up early on Sunday ready to take my bikes up to the van and head off for the final round of the Welsh Cyclocross Series in Crickhowell. It was pouring with rain and dark though so I wasn’t in that much of a hurry. Elsewhere in Wales there were reports of heavy snowfall. Just as I was about to leave Anna came downstairs to tell me that it looked as though the Cyclocross race was going to be cancelled as the safety crew and commissaires couldn’t get through the snow. Sure enough it was cancelled so I was about to have another day at Bluestone with everyone else.

After breakfast we all headed off en masse to the Blue Lagoon for an hour or so in the pool. Next up for the boys was some laser clay-pigeon shooting on the Tournament Field. It looked like fun for them even if it was grey, raining and cold. 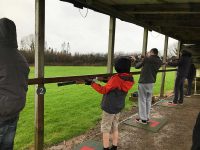 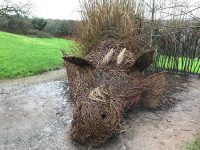 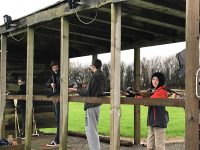 Shooting in the rain 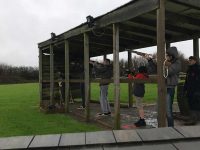 We then had a quick lunch and headed back to the Adventure Centre for ‘Elftopia’ – A Christmas themed 90 minutes of fun! It all got a bit weird and ‘Funhouse’ like from here on in and I’m not sure who enjoyed it the most – somehow I think the oldest member of our party had more fun than the little ones! 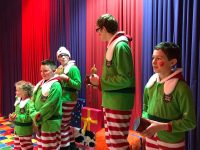 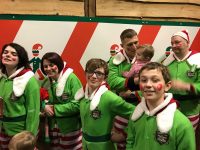 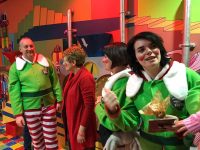 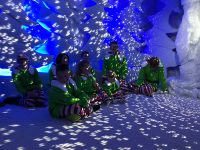 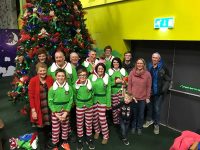 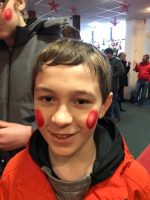 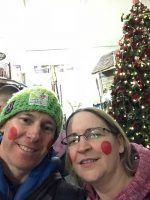 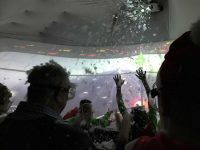 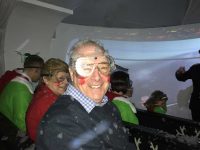 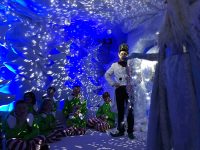 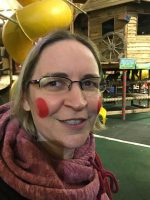 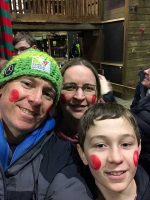 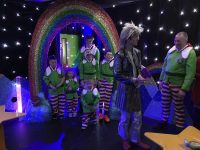 Most people headed off home now, but my Mum and Dad stayed as did we. We couldn’t actually get home as the roads were closed due to snow. So, after dinner and a chat we headed off to bed.

The following morning we packed the van and then had breakfast. It was my birthday now so I opened my presents and then we headed into the Blue Lagoon for a final hour in the pool before leaving. The freezing temperatures outside had plumes of steam rising from the pool and with spikes of phormium poking up around the edges of the outdoor pools it all looked a little like a thermal pool in New Zealand. After coffee and cake together we all headed off home in different directions.

We were soon into the snow-fileds of West Wales with the snow getting ever deeper as we headed home. The roads were clear now though. Other than something cracking our windscreen the journey home was uneventful. Morgan made plans to meet some friends out in the snow. So, once at home we changed into snow clothes and headed off to play in the white stuff.

A nice weekend away and good fun was had by all.