Day four of our trip to Great Cumbrae and with the kayak race completed it was time to chill. I was up early as usual and ready for a nother circumnavigation of the island. Yesterday I had circumnavigated it by surf-ski and bike. Today I was going to do it on foot with an early morning run. It was raining but I set off anyway leaving Anna and Morgan to sleep in the camper. I decided to go clockwise this time so that I only had a mile to run for the toilets at the Ferry Terminal and for some different views.

I headed off into the wind and rain from Wine Bay, around the rugged coastline past White Bay and on past the monument at the top of the island. The next landmark was the ferry terminal where I stopped at the toilet. I then continued on past the watersports centre. Surf Ski’s and kayaks were still strewn across the grass here. Some people who had raced yesterday were staying in the centre and had yet to pack up fully.

The rain increased as I headed south along the long road towards Millport. It did ease by the time I passed Lion Rock though and reached the Marine Biology Research station. Then the sun started to make an appearance as I made my way into Millport. The path and the road follow the coastline past large house that line the seashore and then onto the main promenade, past Crocodile Rock and on towards the harbour. I was keeping up a steady but not fast pace.

Before long I was heading out of Millport and out onto the western side of the island. The weather was improving all the time and the views out to Bute and the mountains of Arran were just the tonic for an easy morning run. The miles were ticking by and I soon approached Fintry Bay. Almost all of the little parking paces along this side of the island were occupied by campers and there had been a row of motorhomes along the prom in Millport too. There were now signs of life from some of them though as people began to wake up. I was soon heading towards the rocky shores of the north of the island and followed the windy road as it crept its way around the island hugging the rocky shore as it went. Seals could be seen on the rocks and splashing in the waters, cormorants were preening themselves on rocky ledges and curlew, lapwing and plovers patrolled the sandy beaches. Before long our camper came in sight. I;d been gradually picking up the pace and soon completed the circumnavigation having run exactly 10 miles in a time of 1hr 23mins.

Anna and Morgan were soon roused from their slumber and we got ready for the day ahead. I improvised a shower by standing in a trug and washing from a bottle of water. 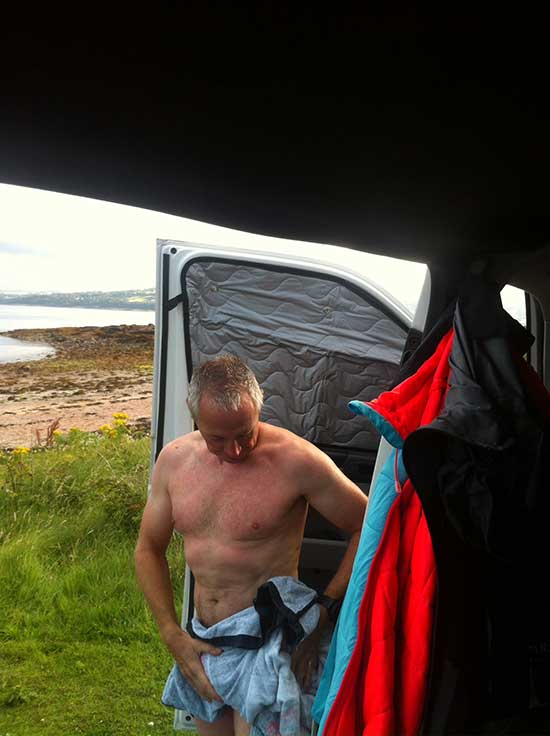 The plan for the day was to leave the stricken camper on the island, catch the ferry to Largs as foot passengers and meet Morgan’s friend Cameron and his Mum Jackie in Largs for the day. We soon boarded the ferry for the 10 minute crossing and then went for a little wander around Largs. 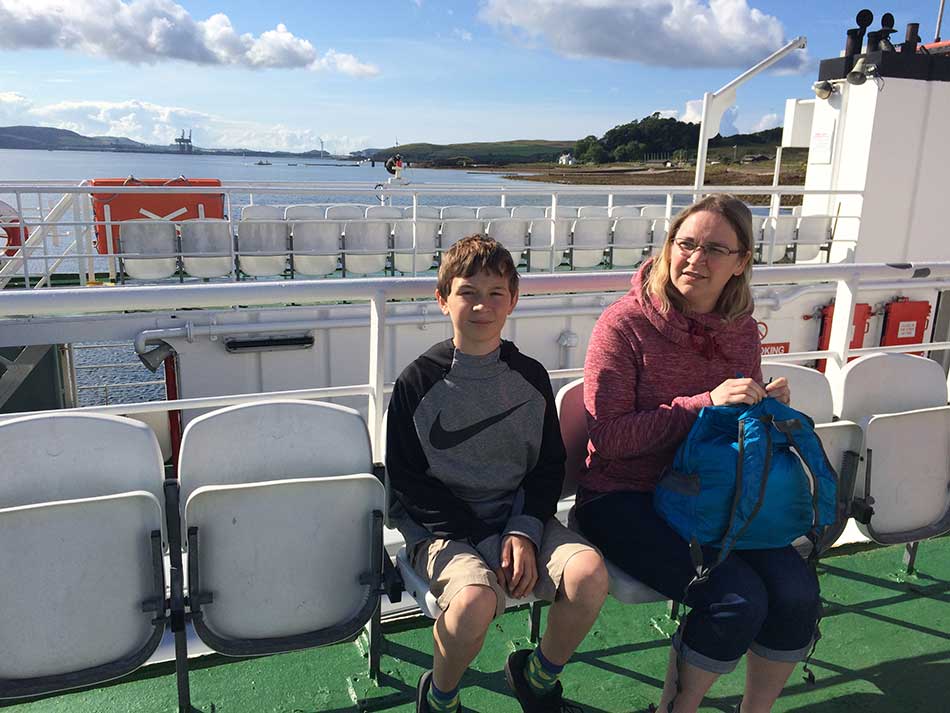 Cameron soon spooted us so we met up and then headed to Nardinis for breakfast. Apparently Nardini’s is:

Scotland’s most famous cafÃ©, restaurant & ice cream parlour re-opened in December of 2008 following a multi £m refurbishment that has seen the landmark art deco building restored to its past glory with a new contemporary feel. Originally open in 1935, Nardini’s is synonymous with a trip “doon the water” making it a must if you are visiting Largs.

It certainly looked nice and we were soon tucking into breakfast. A Fry up for me complete with black pudding, pancakes for Anna and Morgan. Mmm Mmm. We then headed over to the beach where we did some geocaching. Morgan and Cameron ended up exploring a drain under the prom but couldn’t find the geocache so I had to go in after them and found it in seconds. 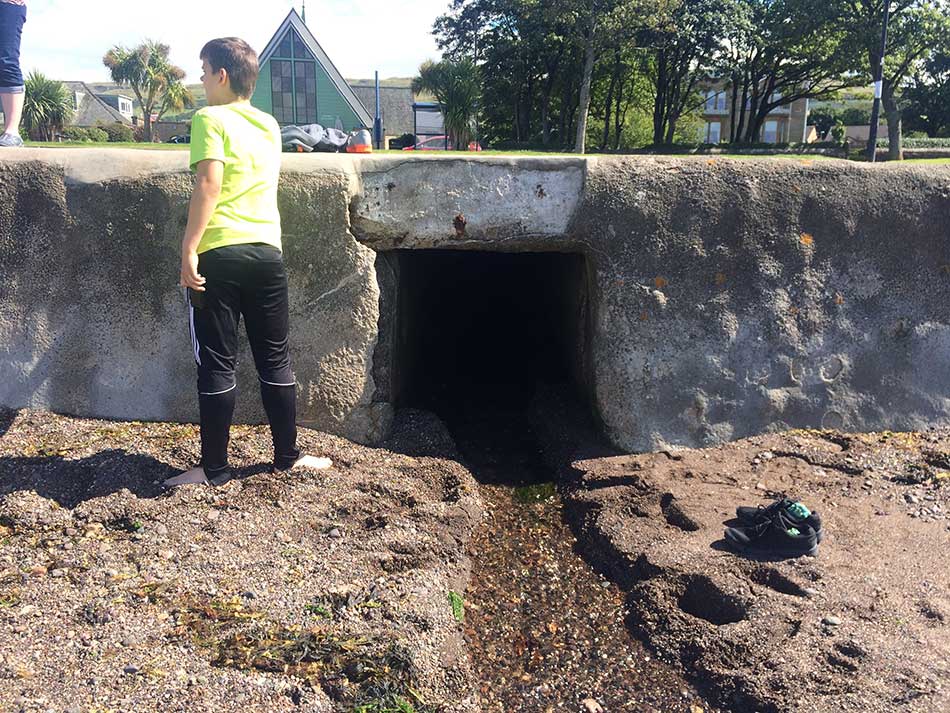 Morgan and Cameron then played on the beach while Anna, Jacki and I sat on a nearby bench chatting in the sunshine. We then popped back to Nardinis for ice creams and then back to the beach where Cameron and Morgan played some more and had a go on the bouncy castle and tiny little dodgems! I’m sure they were far too old and big for both really. 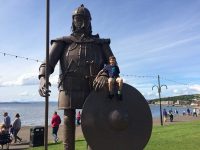 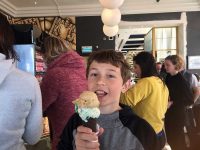 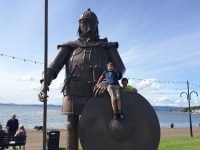 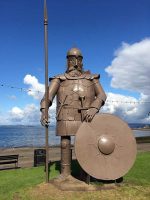 Time was flying as we spent the day in Largs. We watched the ferries come and go, we watched the Waverley Paddle Steamer come into dock and then leave again. I vaguely remember a school trip on the Waverley out around Flatholm and Steepholm in the Bristol Channel, and I’m sure it used to go out to Lundy from Bideford too. It looks as though it now plys it’s trade in the Firth of Clyde. 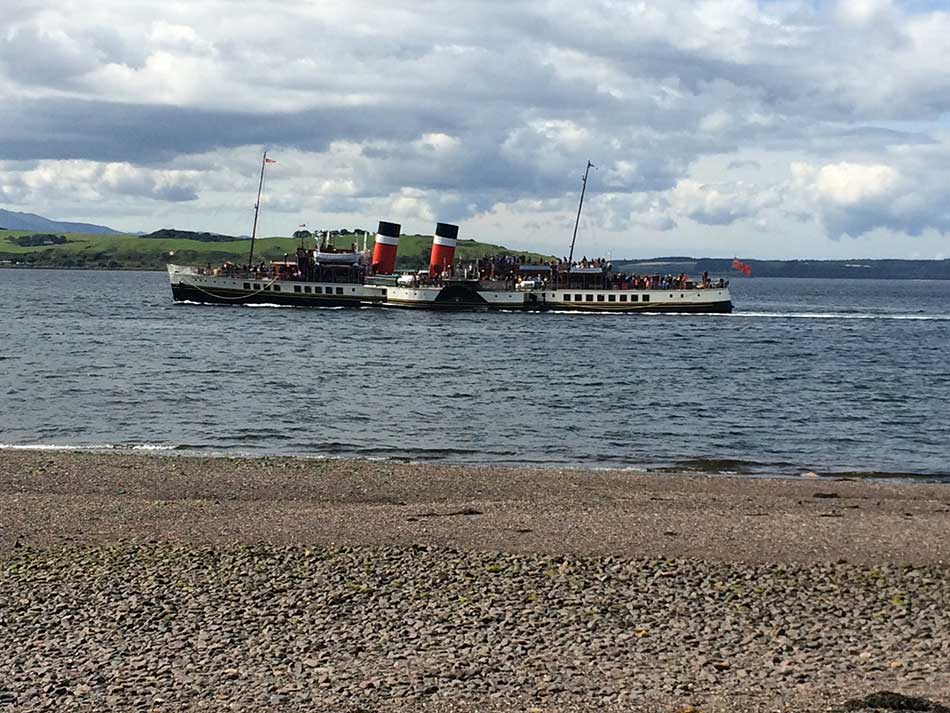 It was soon time for us to reboard the ferry for our trip back to Great Cumbrae though. We said our goodbye and headed back to the island.

Once back on Great Cumbrae we searched for a suitable snorkelling venue and Morgan and I had fun snorkelling over the rocks looking at crabs, fish, seaweed and various shellfish. It was pretty chilly though so Morgan didn’t last long. I stayed in for a little longer and then headed off for a proper swim. I saw a few Lions Mane Jellyfish on the swim and was then joined by an inquisitive seal.

With the watersports done for the day we headed into Millport where we struggled to find somewhere for dinner. We managed to find a table in a pub in the end for what turned out to be a perfectly acceptable cheap and cheerful pub meal. It was then back to the north of the island to a grassy little campsite that we had our eye on. We sat watching the sun set and then got ready for bed. Another lovely day in Scotland.