Another lovely day in Dorset and today we had a trip to Lulworth Cove planned, so after breakfast we set off and soon arrived at Lulworth Cove where we parked in the car park which was quiet had a quick look around the visitor centre and then headed off across the beach which we had virtually to ourselves. It was a nice and sunny but still a little chilly as we strolled around, taking in the views and throwing pebbles into the clear blue waters.

Walking on the Beach

At the far end we started making our way up the cliffs towards the top, but Anna decided it was a little too high and ‘cliffy’ for her, so she went back down to sit on the beach whilst Morgan and I climbed to the top in search of the fossil forest.

The sea mist was beginning to roll in as we reached the top of the climb, but we still had some lovely views out across Lulworth Cove.

Morgan and I then walked along the coast path through avenues of delicious smelling gorse and climbed down the steps to the Forest Forest on the cliffs to the east of Lulworth Cove. There was an Earth Cache to do here and we took a look at the fossil forest burrs. Once again we were the only people here.

Morgan on the Fossil Forest

On the way back, we spotted some lizards in the grass, took a few more photos and then climbed back down to meet Anna on the beach.

The beach was getting busier by now, so we wandered back across to the other side and joined the queue for a boat ride out to Durdle Door. It was only a quick ride, past Stair Hole out to Durdle Door and straight back again. No commentary, no stopping, just a whizz out and back. It was good to sea the coastline from the sea though and we were lucky as the sea mist rolled in thicker than before as we returned and ours was the last boat ride of the day.

Morgan on the RIB

After the boat ride, we popped up to the car to get our wetsuits ready for a swim in the clear blue waters. The looked quite inviting when the sun was shining, but were still going to be cold. Morgan didn’t last long in the water, so I left him to it and swam out across the bay on my own. It turned out to be a lovely swim, and not too cold really.

We then warmed up with a picnic on the grass in the car park, before heading to the shops for some postcards and presents for those back home. We then headed back to Weymouth where we parked at the Premier Inn and wandered into town along the network of cycle paths that I was now getting to know quite well. Morgan wanted to go to Sandcastle World so that’s where we went. The sand sculptures here are quite impressive and very clever, but the whole experience was a little disappointing. There weren’t quite as many sculptures as we were expecting, and it all seemed a little dreary really. We did have a go at building an Easter Bunny sculpture of our own though, just without much success! 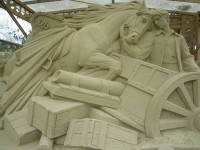 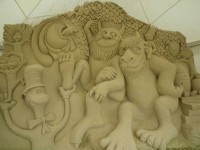 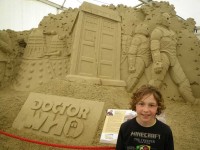 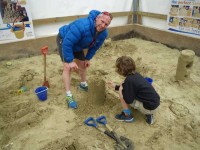 We then walked along the Weymouth esplanade in the mist and popped into a fw amusement arcades before heading to Prezzo for a pizza dinner. We then walked back to the Premier Inn via Radipole Gardens. We saw a deer grazing on some waste-land not far from the hotel and stopped off to buy a few puddings in the supermarket before eating them and going to bed.

Another fun and action packed day in Dorset.