My mission to run around the entirety of Wales continued on Tuesday with a Coast Path run on Anglesey from Church Bay to Amlwch.

As usual this resulted in a nice early start, leaving home in the dark at around 5am. One advantage of these early starts is that the drive to Anglesey is really quick as there are no other cars on the road. I parked in the small village of Rhydwyn, a mile inland from Church Bay.

The sun was rising as I made my way along the country lanes to the coast path at Church Bay. I’d parked here as this was where the bus back would stop later in the day. The hedgerows that lined the country lanes were bedecked in the reds and blacks of ripening blackberries and the hawthorn trees were bending under the weight of bright red berries. It wasn’t fully light yet but it looked as though it was going to be a lovely day.

At Church Bay I made my way onto the Coast Path and started climbing uphill along the cliffs past the sandy beach. The nice wide path soon turned into a narrow, rocky twisty track atop the cliffs. I was once again back onto ‘proper’ coast path. There was no one around, just me and the birds as the path weaved it’s way along the rocky coast. The path occasionally dropped down to run along the tops of secluded rocky coves before climbing once again to the cliff tops. At times it would wind it’s way inland to negotiate steep sided gulleys cut into the cliffs by the raging sea. Today though the sea was in a quiet mood and it was quite peaceful along this stretch of Coast Path. I ran past caves and jagged headlands and then dropped down to a beach with a large rock arch that looked a little like a barrelling wave. There was a large pool behind the beach here and pheasants everywhere. 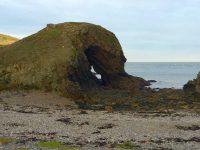 Unfortunately there was also a sign informing me that the following section of Coast Path was closed between September 14th and February 1st. The headland before me which was swathed in pine forest was private land and there was no access over the winter. I think this corresponds with pheasant shooting season too which would make sense considering the number of these birds that were here. There was a detour in place though that took me uphill and inland a little to Mynachdy Farm where it doubled back on itself to the coast. 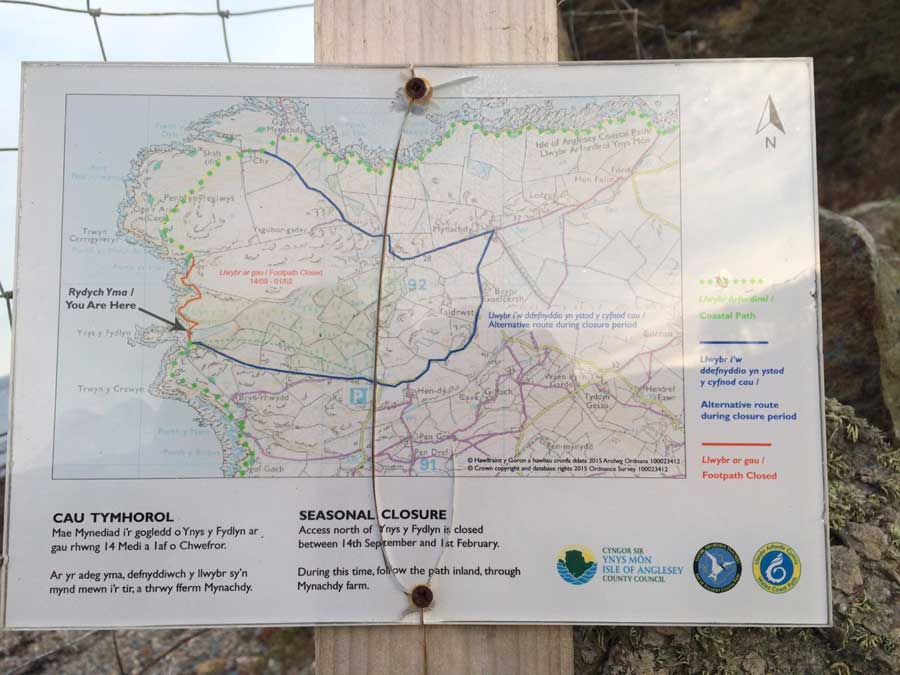 I followed the diversion and soon found myself in a farmyard that was literally ankle deep in cow poo! The path itself was also ankle deep in the stuff and continued like this for a good half mile. There was nothing for it but to wade through it. On and on it went slowly filling my shoes up and coating my legs. Finally I emerged back out onto the coast path and then could run through some fields of long grass that were wet with dew. At least this helped clean some of the mess off my shoes.

The Coast Path now followed the Rocky Coastline of Anglesey heading East into a headwind. I had finally turned the corner at the top of Anglesey. The sea was a little rougher here as currents and the wind whipped up white-horses. The path clung to the coast line along the tops of low rocky cliffs. Once again there were some secluded, sheltered coves to run around and the path was well signposted.

It was still quite early so the sun was only just putting in an appearance and I could just make out Wylfa Power Station in the distance. 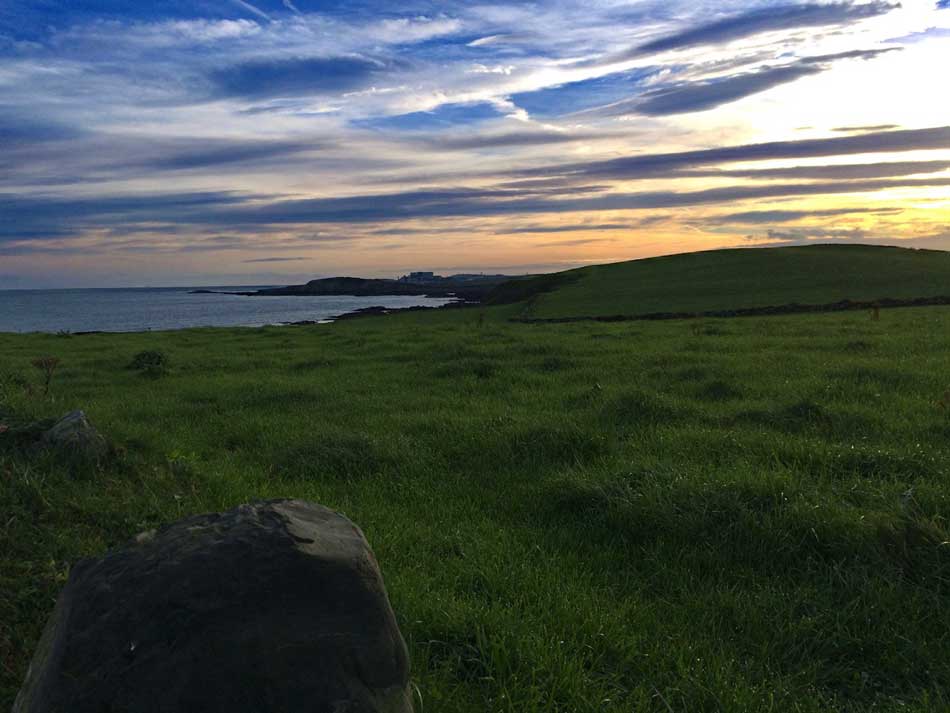 Wylfa in the Distance

The Coast path took me out around the headland of Trwyn Celyn and then along the pebble ridge behind the lovely Cemlyn Bay. The small pebbles were a nightmare to run on but they didn’t last too long and I was able to drop down and run along the edge of the Cemlyn Nature Reserve where a couple of swans came to greet me. 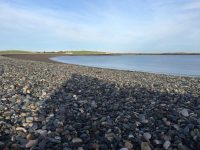 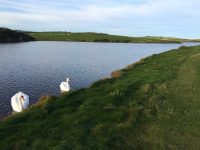 I stopped here to refuel and read some of the signs about the Nature Reserve and the bay. There’s also a detour on the Coast Path here in case the pebble bank is impassable. 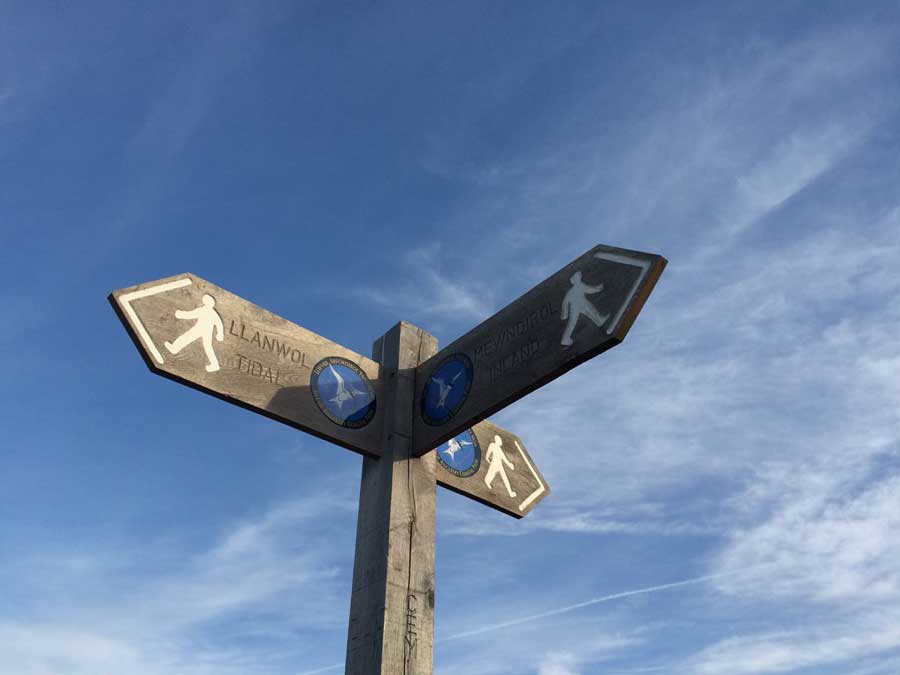 There was also another interesting sign as I headed off making my way onto the the rocky fields of the Coast Path once more. It read

Quite what I was supposed to do with that information I don’t know? I’m assuming it was warning me that there was a bull in the field and also covering themselves in case the bull took a disliking to me. Fortunately I managed to pass through without seeing the bull, and more importantly as far as I know it didn’t see me either! 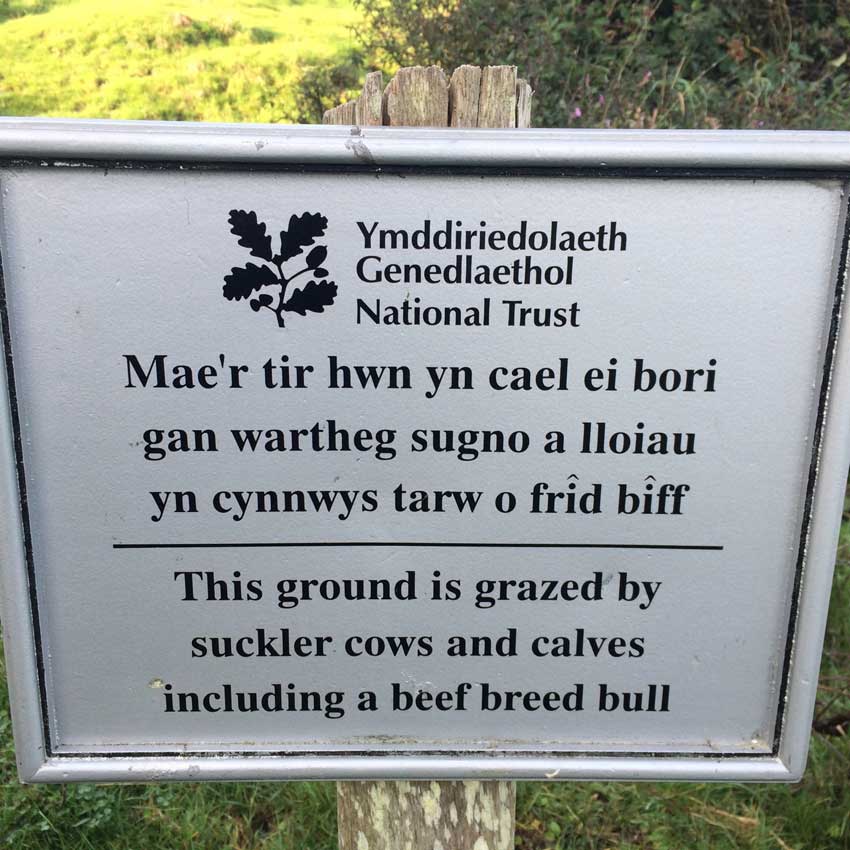 The huge outline of Wylfa Nuclear Power Station was now dominating my view as I headed east towards it. Finally I dropped down off the rocky coast, across a little stream and then started following some easier trails alongside roads that were being used by heavy machinery. According the signs they were investigating the area for the proposed second plant named Wylfa Newydd (previously referred to as Wylfa B). 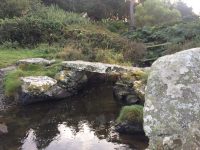 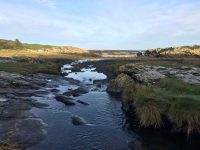 These paths soon emerged onto the main access road to Wylfa Power Station, taking me past the visitor centre and on towards the plant itself. Obviously it didn’t go right into the power plant but took me along another road past a sub-station that was buzzing with electrical power that was carried off onto huge pylons. I’m fairly certain that the nuclear power station stopped generating in 2015 and is now being ‘de-fuelled’ and the decommissioned (which will take decades). I don’t quite know why this electrical sub-station was quite so lively in that case, but there was definitely electricity flowing through it from somewhere, and judging by the loud humming buzz and the 600,000 volt warning signs, quite a significant amount of electricity! 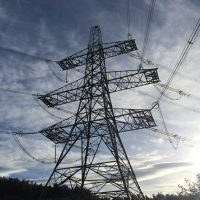 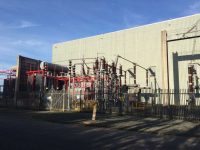 The path then took me through a little wooded area before emerging out onto the coast again on the other side of the power station. I then followed the coast path around Wylfa Head and then pretty much back onto myself as it ran along the top of Porth yr Ogof and Porth Wylfa. There were a few signs here and there about detours to the path due to investigative work and archaeological surveys but I couldn’t quite work out where the detours went so just continued to follow the signs as best I could. The evidence of excavations were evident all along this stretch of coast though as I left Wylfa behind and headed towards Cemaes.

The coast path eventually brought me out into the picturesque Cemaes bay. I remember coming here on a geology field trip to look at the Gwna Melange. The Gwna Group is considered to represent the result of an olistostrome. This is a giant underwater gravity slide, which probably occurred as a result of tectonic activity at some time after 614 million years ago. It includes clasts, at all sizes from millimetres up to a kilometre or more, of a diverse range of both sedimentary and igneous rocks. I didn’t stop to look at them today but was pleased to see a whole collection of rocks displayed atop little plinths along the cliffs here. Geology tourism! The coast path signs were also embedded in the pavement along the back of the beach here which was a nice touch. 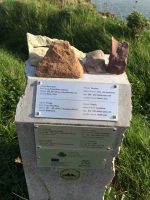 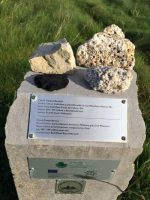 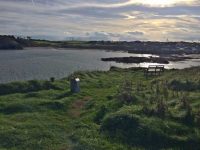 With about 13 miles under my belt, I had the option of stopping here as the bus came through Cemaes, but it wouldn’t be here for hours yet so I continued on my way. It was now Amlwch or bust. The path took me along the beach and then out onto the cliffs overlooking the beach. 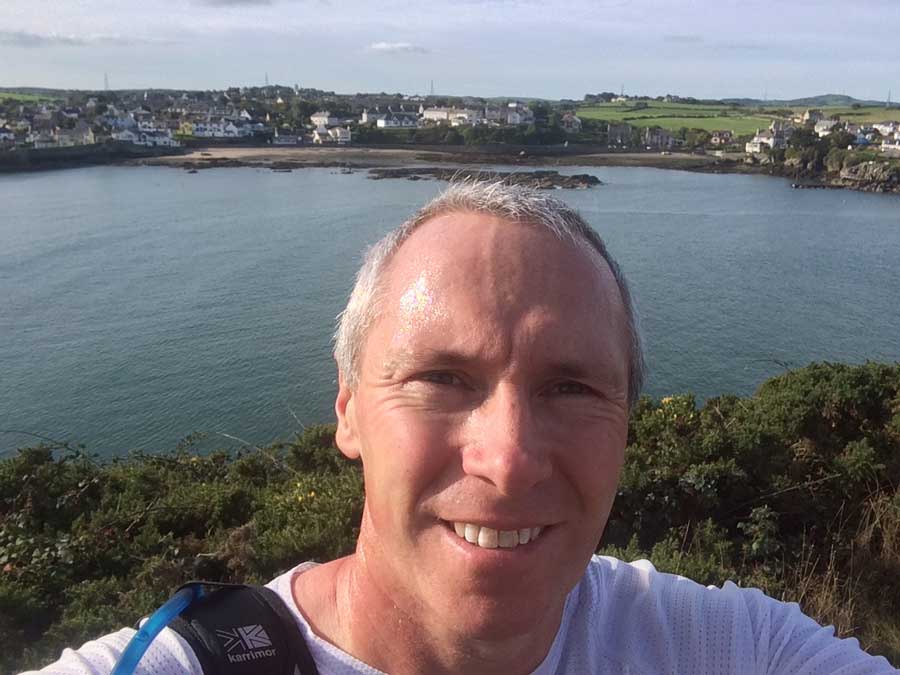 I passed a small church and then the Coast Path became more difficult. 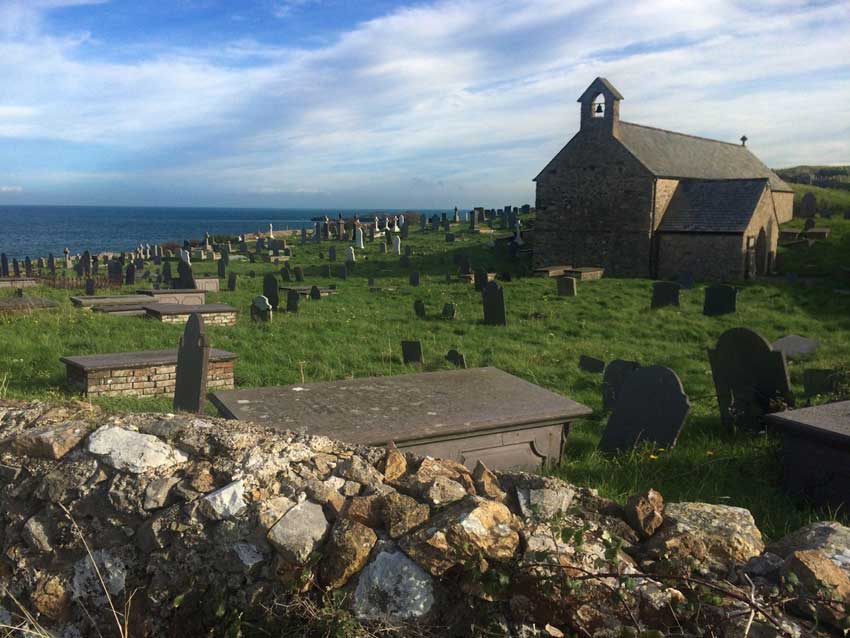 The paths were rocky, the footing was difficult and I needed to concentrate. On top of that the terrain suddenly got very steep. 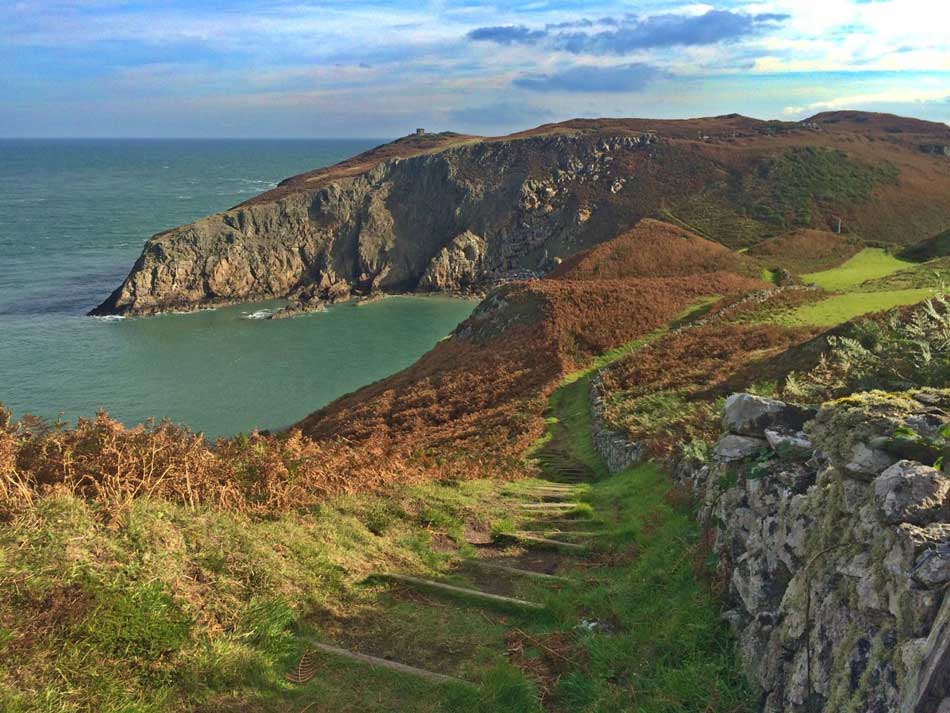 I was forced to walk on both the descents and the climbs and some of them were not only steep but very long too. It made for some amazing scenery and the whole area felt quite remote but with a rugged, wild beauty. Mind you, with terrain like this my pace had slowed considerably and I still had a long way to go to get to Amlwch. 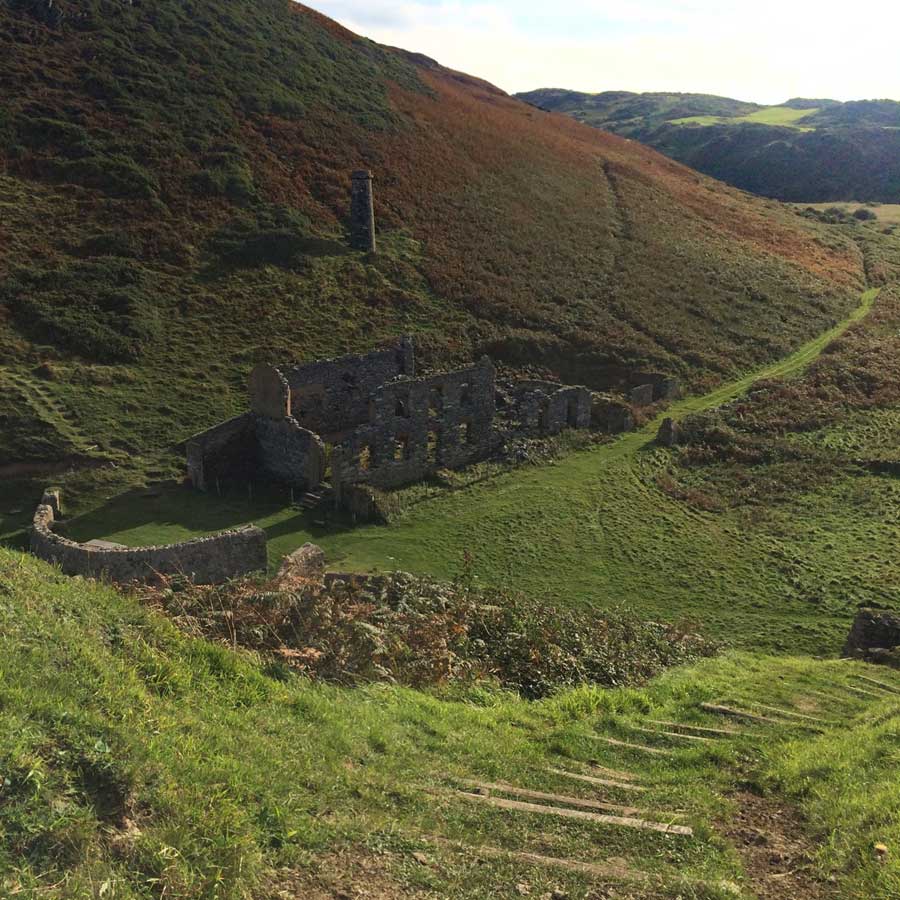 At one point I reached the most Northerly part of my trip as I passed a tower at the top of Llanlleiana Head. The official most northerly point of Wales is a small rocky island just offshore of this headland called Ynys Badrig or Middle Mouse. You can just see it in the photo below.

My legs were pretty sore by now. Thankfully my ankle which had been playing up for the last couple of weeks was holding up, but my right leg was feeling lazy. My right adductor didn’t want to play along and my right glut was complaining too. On I went though stopping now and then to admire the stunning scenery. 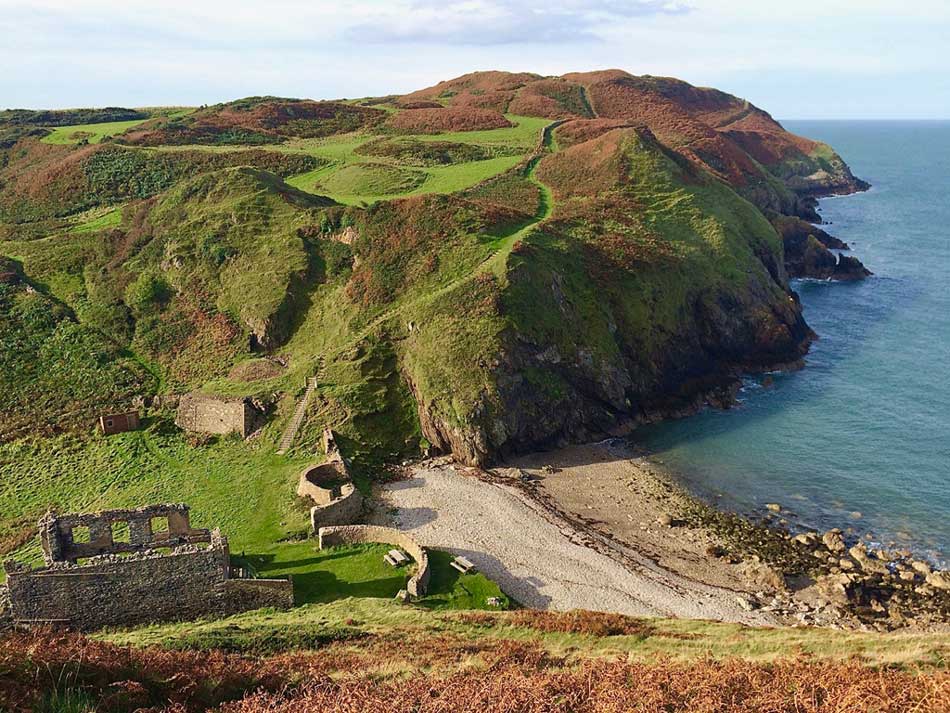 On and on the Coast path went, continually plunging down to the sea at rocky coves and pebbly beaches before climbing once again to the tops of high cliffs. Forever weaving along the coastline. I lost track of the various coves, beaches and clifftops but eventually rounded the corner towards Bull Bay where a large fishing vessel was chugging its way through the choppy seas. Waves were crashing over it’s bow and spray was dashing its decks as it headed into the wind. I too was chugging along the coast by now, wishing Amlwch to be around the next corner. It wasn’t. First I had to run along the road beside Bull Bay and then the path once again headed off around low rocky cliffs. Over every rise and every bend the path continued, snaking its way as close to the shoreline as possible and not giving me any short cuts.

Finally, after much to-ing and fro-ing and much to my relief the path made it’s way to the little harbour at Amlwch. I then made my way through the village to find the bus stop. 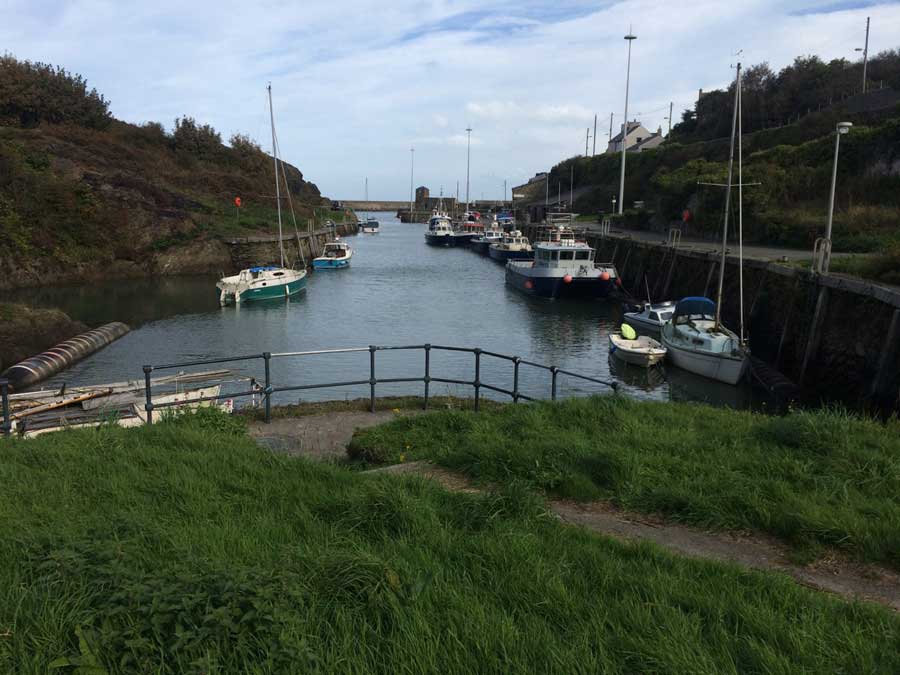 The bus was right next to a large Co-op supermarket so I popped in there to get some lunch and then sat on a bench waiting for the bus which was due in 20 minutes at 12:45. At 12:35 two buses arrived and sat at the bus stop. None of these were mine. Another guy sat there was also waiting for the number 61. At 12:45 we started wondering where our bus was, and then just as the first bus to arrive (the number 60) was about to pull away I noticed a small LED sign on it side change from 60 to 61 – It was our bus after all, but it didn’t give us much warning about it. We managed to jump on it just before it pulled away. I was then soon back at Rhyd-wyn where I jumped in my car for the journey home. The drive home took somewhat longer than the drive there, but I was home before Anna and Morgan. Another successful day on the Wales Coast Path, and another 21.5 miles completed. There’s still a long way to go yet though.