After 6 years or so as Scout Leaders we had our last meeting on Friday. We had never planned to become Scout Leaders, it just happened when there was no one else to lead the group. We volunteered to help out and before we knew it we were organising and leading the whole thing. We’ve had a few parent helpers here and there but we had been planning, organising and running the show ourselves.

Earlier this year though we decided that we’d done our bit. Anna’s arthritis wasn’t helping matters and she needed more time to spend on her studies too. Having Friday evenings free so that we could have family weekends away would be nice. In general work, family and health commitments meant that we simply hadn’t had the time or energy to invest in Scouts. We felt as though the programme and weekly meetings would suffer as a result and that the Scouts wouldn’t be getting the experience they deserved. We therefore told the Executive Committee that we would be leaving them at the end of term.

We felt a bit guilty about leaving them as we hadn’t found any replacement leaders to take over, but at the same time we had done our stint which is more than most people do, and the Exec should be able to find replacements.

Off on a Hike

The final meeting on Friday was a hike and picnic that we had organised for not only the Scouts but the Cubs and Beavers too. Consequently it was only a short 3 mile walk around some trails at Pendam. I’d marked out some waypoints on a map with some instructions on it and had printed them out to give to the Scouts. The plan was to send the Scouts off on their own, unaccompanied by adults to see if they could navigate the route on their own. We would give them 10 minutes head start and then would lead the Cubs and Beavers around the same route. We’d then meet them back at the starting point where we would all have a picnic together.

Unfortunately there were only 3 Scouts there – Morgan (our son) Cerys (our helpers daughter) and Sky. They seemed quite keen and excited to set off on their own though so I gave them some instructions told them what to do if they got properly lost and set them off. We waited around for some stragglers to arrive and finally set off behind them. It was a nice evening and I had estimated the walk would take 90 minutes at the pace of a Beaver (actually I had based it on the pace of Cira, the Beaver Leader!) We had 12 cubs and beavers with us, Cira their leader and a number of cub and beaver adults too.

The weather was kind to us and some of the Cubs were leading the way with the maps. Most weren’t at all interested in the maps but Anna and I helped those that were. They were asking questions all the way around about where we were and which way up they should hold the map but in general they seemed to understand and get the hang of it.

Top of the Hill

At the top of the hill we had some lovely views out across the Welsh Hills. I managed to spot the three Scouts who had obviously not only been going the right way but had been making progress too as they were now on the last leg of the walk and quite a way ahead of us.

Top of the Hill

After a little stop to admire the views we descended the paths back to the lake and then followed the route the Scouts had taken back to the car park. 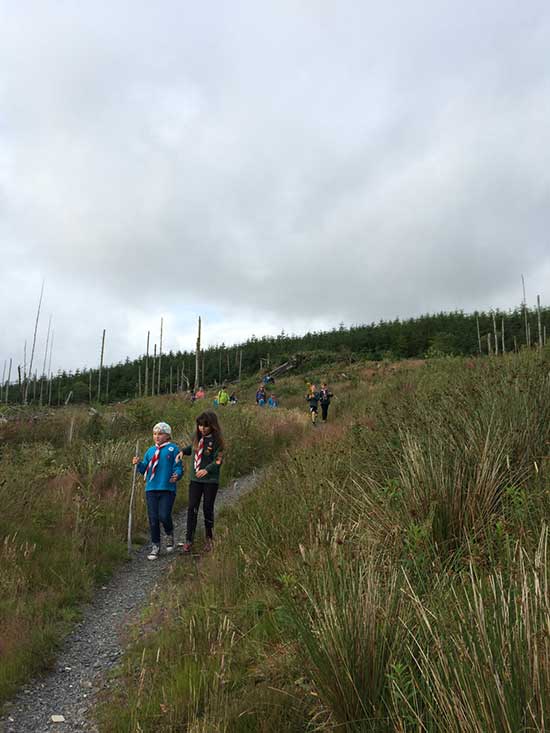 A Trail of Cubs and Beavers

The walk had taken exactly 90 minutes and the Scouts were there playing in the trees waiting for us. They sounded as though they had got on well with their route-finding and had enjoyed being out on their own navigating through the hills.

At the cars we got the food out that parents and leaders had brought along and then had a nice big picnic together. Cira then announced the fact that it was our last night with them, gave us a pressie of wine, chocolates and some vouchers for the local delicatessen and sweet shop and thanked us for service. Such proceedings were kept short as the midges had started to attack, so we were soon clearing up and heading home after our final day as Scout Leaders. We said our goodbyes and headed off – no more camps, no more crazy adventures, no more lantern building and carol singing, no more bag-packing, no more fires on the beach and no more neckers and woggles!

It’s a shame more of the Scouts themselves weren’t there to say goodbye, and none of their parents either but I’m sure we’ll see them around. Lets hope they find someone else to take over and that 2nd Borth Scouts goes from strength to strength. To be honest they’ll probably do a better job than we did. We were fine with the activities and especially the outdoorsy things. We were really good at devising an exciting programme and fulfilling it but we were completely useless at the traditional ‘Scouty-ness’. We knew nothing about promises, mottos, neckers and jamborees. Our opening and closing circles were a shambles – not once was there a flag break or whatever they call it. We did our best though and the Scouts enjoyed it even if we were a slightly unconventional Scout Group.