I think I’ve been improving my surf skiing skills this year. I’ve been trying to get in out every opportunity, even if only for a short paddle. I think that lots of short sessions a week are better than just one long session for a number of reasons.

My flat water session,s which are generally in the estuary at Ynyslas and better still along the River Leri, are going well. When I first started in my new Knysna BLU surf ski I was spending the whole time just concentrating on staying on. It was just so unstable that all my energy went into keeping it upright. That’s no longer the case and I’ve now had a few session on flat water where falling off hasn’t been an issue. I’ve even been out without a wetsuit on, fairly confident that I wasn’t going to get wet. I must be improving my surf skiing skills even if I still don’t feel fast. 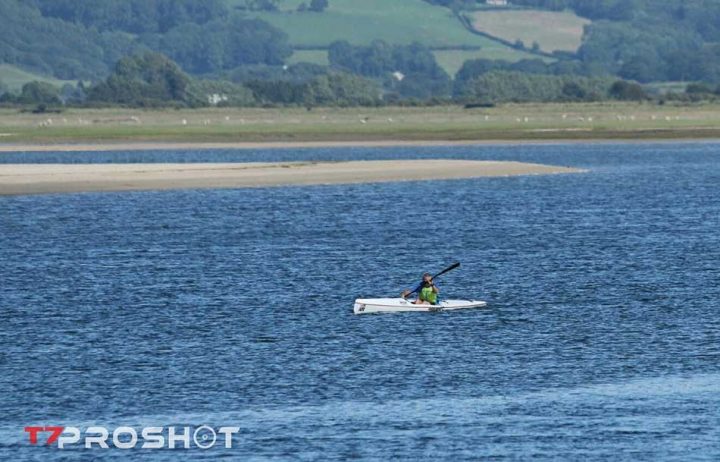 That said, I do think I am a little faster than I was on my old Gaisford Ski. I used to average around 5mph on my old ski when putting in a little bit of effort, and did manage 6mph flat out in a 5km Time Trial but that was hard work. I’m able to manage 5mph without much effort on the new ski, so hopefully once I’m a little more confident and can actually apply more power the speeds will increase. Improving my surf-skiing skills should eventually allow me to get more out of this boat than I could the old one. Here’s a comparison of two paddle sessions up and down the River Leri. 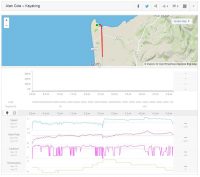 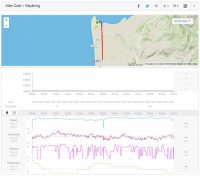 The first is on my old Gaisford surf ski with the following stats:

The second is on my new Knysna BLU surf ski with the following stats:

As you can see, despite being further, the session in the Knysna BLU was slightly faster and my heart rate was MUCH lower suggesting that it was much easier. All I need to do now is develop the confidence and stability to put more effort in so that I can go faster.

I’ve been getting out on the sea as well. In fact on Wednesday evening this week I went out in the roughest conditions I’ve tried so far. I’d been planning to go out on the seafront for a little paddle, but a nice NNW sea-breeze had been picking up all day. As I drove over the coast road to Borth, the sea was covered in white caps and the wind was blowing at around 15 knots with gusts to 20 knots. It wasn’t looking ideal for my surf ski and the 1-2 foot swell wasn’t going to help either. I decided that it was worth giving it a go though as pushing myself just a little beyond my capabilities (as long as it’s safe to do so) has to be a good thing. Hopefully it’s session like that where I will be improving my surf skiing skills. Even if it proved to be a bit too much then at least subsequent sessions in less challenging conditions might feel significantly easier afterwards.

I actually surprised myself though. Yes, I fell off lots. Yes I struggled to re-mount lots, but I also managed to stay on lots too. I was able to make my way out through the waves without too much trouble. I was able to paddle parallel to the shore as well despite having waves and chop hit me from all angles. I was OK catching waves back in too. I was still a little wobbly on the turns and I did get knocked off quite a few times but in between my swims I felt more stable and more in control than I had expected. It was good fun of course as well, which is what it’s all about. I was keeping active, spending time in the sea, having fun and improving my surf skiing skills all at the same time.

The remounts are the most difficult part. They are fine in flat water and I tend to prefer the straddle method. This puts you in quite a precarious position though as you slide down into the seat bucket. Once in the waves and chop it becomes more difficult and I often fall off again at this point. It is best done with the ski in line with the wind but as soon as the wind gets up this becomes difficult as the wind tends to blow the ski around so that it is perpendicular to the wind. It is in the conditions that the side-saddle remount is needed. I haven’t quite got this perfected, but I did manage to do a few in the wind and waves on Wednesday.

The trick seems to be to let the ski get blown so that it is at right angles to the wind and then make sure you are on the upwind side of the ski before trying to remount. I also find it easier if I remember to put the hand that goes on the downwind side of the ski right at the back of the seat bucket and keep it behind me as I swivel into the seat. This puts me in a more stable position to finish off the remount. It’s definitely something I need to practice though. Next time I’m out in flat water I may spend some time just practising side-saddle remounts. The fact that I managed a few in rougher conditions means that I can do them, I just need to get better at them and make sure I can do them from both sides.

I also have a way practising my balance on dry land too.

We put the slack line out for Morgan and his friends at the weekend. We’re terrible at slack-lining and haven’t done it for a few years. This lack of practice seems to have turned us into complete beginners again so there’s plenty of room for improvement. It has to be good for balance in general so can’t do any harm. It also helps develop core strength and stability. I can even sit on it and practice my balance in a surf-skiing position. It’s even wobblier than my surf ski so if I can get the hang of sitting on this the surf ski should be a doddle!

I did try it with an old broom handle to simulate paddles as well, but once you start wobbling and supporting yourself with the broom handle it was next to impossible to regain proper balance. It didn’t help that the broom handle then snapped, sending me flying! I don’t think I’ll try that with my nice new carbon blade paddles. Admittedly they are less likely to snap than a rotten broom handle but I don’t fancy putting that to the test! It did make for an amusing video clip though.