We didn’t really have much planned for Bank Holiday Monday. For a start I kind of forget about Bank Holidays as I don’t usually ‘go into’ work on a Monday but work from home. However, Anna and Morgan were off so it seemed as though we should do something.

I was up early as usual so did a couple of hours work on the computer first and then decided to go for a run around Ynyslas. It was a bit damp and chilly outside but I soon warmed up as I ran along the beach. There was no one else around. The beach was deserted, there ere decent waves breaking on the shore and the rain had stopped. It even looked as though it would brighten up soon as I made my way across the soft sands and around the point into the estuary. There were one or two people here out walking their dogs in the distance.

I wanted to run for around 30 minutes but also wanted to get back so that I could go play in the waves. I could have headed straight home from here but decided to stick to the 30 minute plan so ran around the estuary and out onto the track beside the boat yard. This has been really wet with some deep muddy puddles lately but has dried out over the past few days. The rain overnight though had turned it into a slippery, claggy, sticky mess. The grey clayey mud stuck to everything. My shoes were suddenly three times the weight they were before and my legs were coated in big clumps of the stuff. It wasn’t easy running along here thanks to the extra mud clinging to everything and the slippery nature of the uneven surface. I was glad to get out onto the road where I could splash through a few puddles to try to clear some of the mud.

I headed back towards the beach, through the car park and along the top of the pebbles before getting home. The whole route did indeed take me 30 minutes. It was a nice varied circular route around Ynyslas.

We’re trying not to use too much water at the mo as we have some drainage issues going on. So, rather than jump into the shower I jumped into my wetsuit instead, grabbed my Stand-up Paddleboard and headed across to the beach. There was still no one else around and I had a pleasant hour SUP surfing on some gloriously glassy waves. The session started off with nice mellow 2 foot waves. The got a fair bit beigger come the end though providing some perfect faces to charge down.

Back at home and Morgan and Anna were now out of bed so it was time for some breakfast and a coffee and to make plans for the day. As usual Morgan didn’t want to do anything with us. Anna and I therefore decided to head out to Ysbyty Ystwyth to a new(ish) garden nursery there that Anna had heard about. It’s a fair drive from here but would be through nice scenery and if they weren’t open we could pop into Cwtch CafÃ© for a coffee and cake. It may be a bit predictable but what’s a Bank Holiday for if not visiting a Garden Centre!

I fixed the guttering on the shed first and then we headed of through Ceredigion towards Ysbyty Ystwyth. We soon found the Sky’s Garden Nursery and it was indeed open. Apparently they are usually closed on a Monday but do open on Bank Holiday Mondays. It’s a lovely little place. Nothing huge just poly-tunnel in a field really but we were given a good welcome by the owners. They are a young family that have started the garden nursery here in the heart of Mid Wales. Apparently “The vision came from their experience of living in Andalusia, where they grew vegetables and soft fruits organically”.

They seemed really nice and the plants all looked good too. They were a young husband and wife (presumably) with a young daughter, a friendly dog and a ginger cat. They were very friendly and we were soon chatting about gardens, gardening, the challenges of gardening on the coast and about various plants that they had. We bought a few to try just to see if they could cope with the challenges of Ynyslas. We bought a couple of Sea Buckthorns, some Goji Berries and a Lupin. We’ve tried Goji Berries without success before but they should be OK here so another attempt was in order. The Sea Buckthorn should cope with the wind and salt too. Lupins do OK here and we needed something to replace a small conifer that hadn’t survived.

Anna had heard good things about the food here as well. As a family run business this was prepared in a little trailer. They had a special on today of handmade scotch egg with potato salad, coleslaw and salad. Not the most warming of meals but it sounded nice. Anna had a more warming butternut squash soup with a nice warm bread roll. Both were delicious and again the service was good and very friendly. Definitely worth the trip out there and we wish them luck on their venture – something we’ve always thought about doing really. 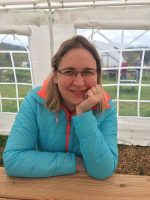 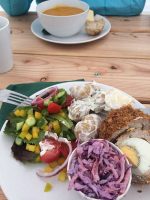 Pottering in the Garden

Back at home and the sun had come out. In fact the temperature was on the rise too. The bees were getting busy on the garden so I decided to join them. I potted up the Goji Berries, Planted out the sea Buckthorn and the Lupin and pottered around a little. It actually got quite warm and Robbie our cat along with Parkin (the ginger cat that we seem to have adopted) were sunbathing on the bench. I tried to get a photo of them but only had my GoPro wioth me so had to get close to them. Parkin was having none of it and disappeared in a flash. I did manage to get one of Robbie though. 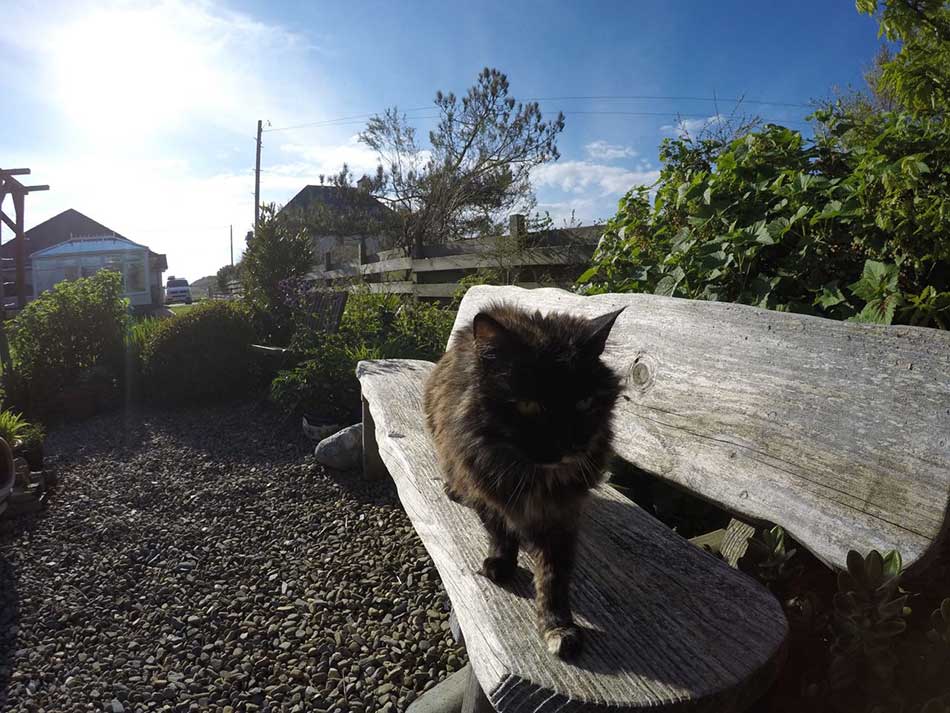 She didn’t hang around long either and this is the usual view you get of her if trying to approach. 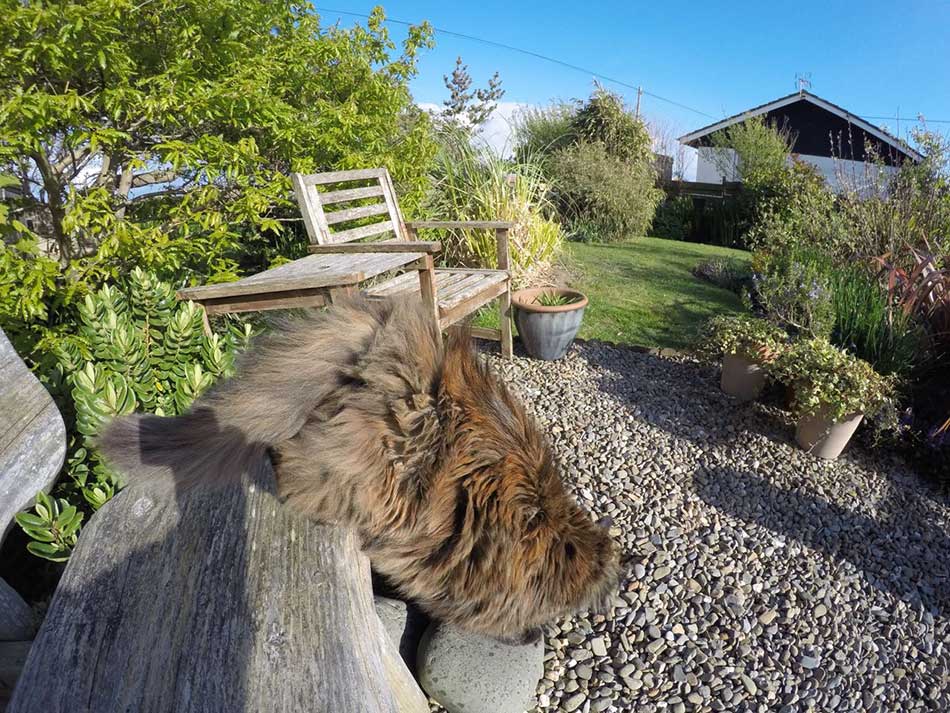 I took a few other photos of the garden in the sunshine using the GoPro. 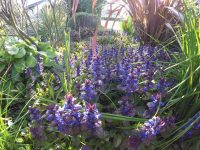 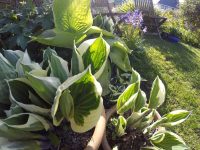 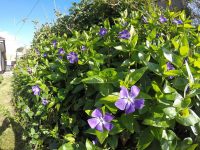 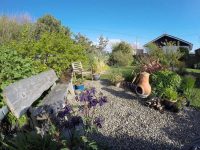 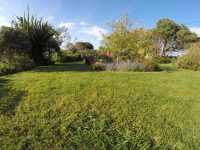 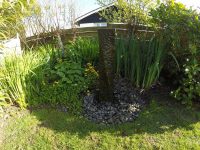 I then decided to head out in the sunshine on my bike. For the first time this year I was out in short sleeves, shorts and without a back up jacket in my pocket. Typically though as soon as I left Ynyslas it clouded over and once towards Talybont it was actually spotting with rain. It never came to much though so I stayed dry. I planned to do my usual CX route out through Borth, past the Animlarium and along the Leri and then around the bottom of the bog and up into Talybont Woods. Just a few days ago friend of mine had stolen my Strava KOM on the climb up to and through the woods so I thought I’d put in a bit of an effort to get it back here. I managed to do so which is always fun and then went around for another loop of the woods before heading back home via Taliesin. A nice loop of the bog with a couple of loops of Talybont woods thrown in and the regaining of a KOM too.

Not a bad way to spend the day really.