An Afternoon in the Garden

After our poppy making at the Wonderwool Wales Festival on Sunday morning, we drove home and collectd Morgan on what was now a gorgeous day. It looked likely to be the last day like this for a while though as the weather was set to take a turn back towards winter. The sunshine and temperatures just into double figures were about to be replaced with much cooler conditions, some winds from the north and the threat of snow. I decided to make the most of it while it lasted and spent the afternoon in the garden.

Jobs in the Garden

I didn’t do any big jobs today as I’m pretty much on top of things out there. I’ve even made a start on the front garden, although as usual that seems to get a little neglected. I have at least weeded the lavender border around the deck and dismantled some broken fence along the front. One of the lavenders is even beginning to flower. 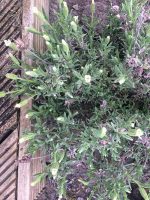 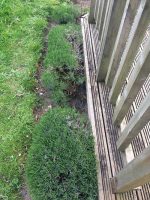 Out the back things were looking good so I started off sowing some seeds and taking a load of cuttings. Some of these are now in pots in the conservatory. Some were sown directly into neat little rows in the raised vegetable border. Others I’ve put onto some shelves under the new lean-to. If I can remember to water plants out here then this could become a giant cold frame. Many of the seeds were quite out of date so I don’t know how they’lll do but there were pumpkins, spinach, lettuce, broccoli and courgettes. The veg bed also has strawberries in it this year, beans, the rhubarb and probably some self seeded nasturtiums along the back too. 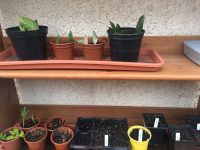 Cuttings in the lean-to 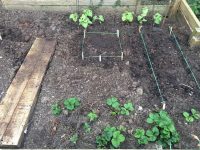 Whilst doing these jobs I pottered around the garden pulling out weeds, tidying things up and enjoyed the sunshine. It’s looking good out there at the moment. The primroses look nice and there’s a lovely group of primulas that I don’t even remember planting.

The lupins look nice with some rain on them too. There are bluebells and forget-me-nots everywhere. Everything is looking neat and tidy. Lets hope this cold spell that we’re due doesn’t do too much damage. 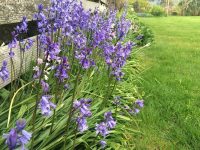 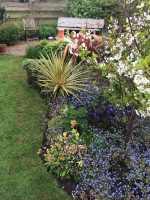