Playing in the Sea

The air temperatures may be all over the place, but that doesn’t stop me from playing in the sea. According to the Borth and Ynyslas Weather Station in our back garden, the temperature so far in April has soared to 19°C on the 8th, a lovely temperature for any time of year here on the coast. However we’re having a bit of a cold snap at the moment and today on the 26th it was minus 0.8°C when I left the house. I had to scrape ice off the van windows and then as I drove towards Aberystwyth there were places where the temperature dropped to minus 4°C. I was about to go playing in the sea despite these frigid conditions.

Playing in the Sea – Temperatures

To be fair, the sea temperature is much less variable and a hell of a lot warmer too. Today in Aberystwyth it was 10.6°C and generally only varies by less than a degree throughout the day. Heavy rain or snow melt in the hills can of course affect it quite a bit near to river mouths or in the estuary at Ynyslas where it will be a little colder. Generally though the high heat capacity of such a large body of water keeps it fairly stable. I’m not saying that 10°C water is warm – it’s not, it’s pretty damn chilly, but with a suitable wetsuit it is perfectly comfortable and therefore no excuse not to be out in it. 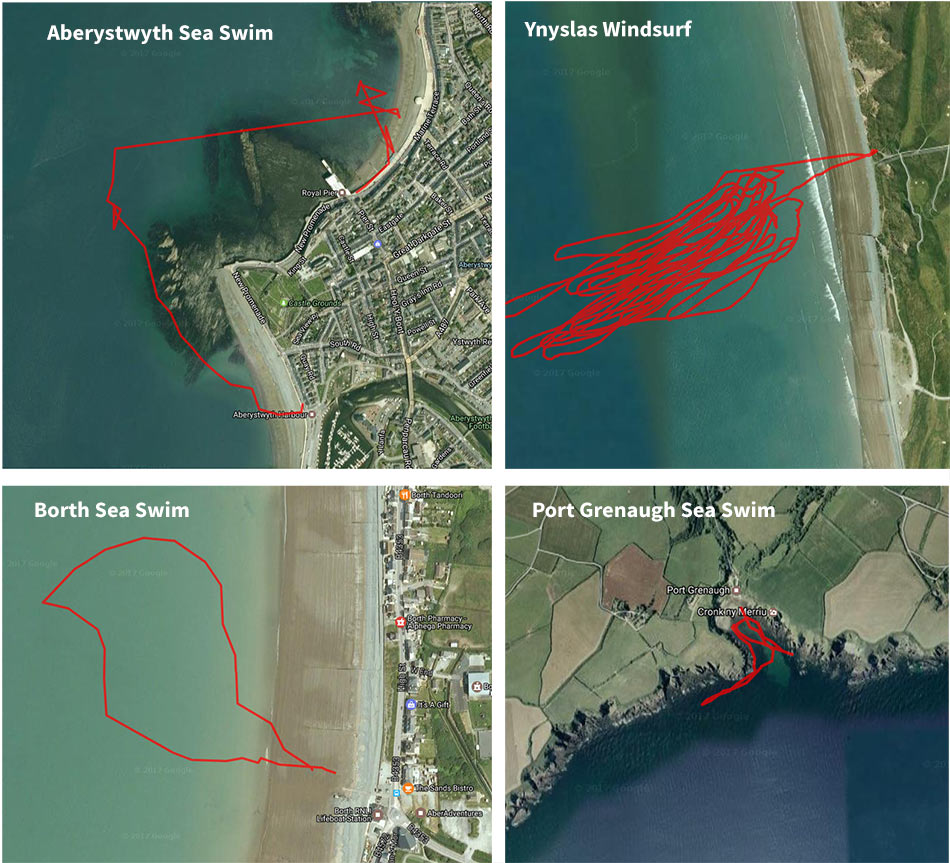 Playing in the Sea

So far this year I’ve been out for sea swims in a number of places:

I have of course been wearing my thin 3/2mm swimming wetsuit for these swims and have had a swimming hat on and some gloves. My feet have been barefoot though and so far it’s been fine. I guess a neoprene hat might be a nice little luxury for this time of year though and maybe a thin pair of neoprene socks too, but part of the fun is coping with the cold. The worst part today was out of the water, especially walking across the ice-covered jetty with bare-feet after the swim. I had thoughtfully stashed a pair of trainers, a jacket and a fleecy hat on the jettty ready for the walk back though. I’m glad I had as walking back barefoot would have been painful! I think having a large pair of goggles that covers more of my face than standard goggles helps too.

My surf-ski is pretty unstable so even a small amount of chop sometimes knocks me off. At this time of year I tend to wear a thin wetsuit whilst surf-skiing but only pull it up over my legs. My legs and bum are virtually in the water whilst on my ski so that helps keep my bottom half warmish but I like to have more freedom of movement around my shoulders so don’t pull the wetsuit up above my waist. I then just wear a thermal top and a windproof jacket, neither of which provide any insulation or protection from the cold water during an accidental dunking. I soon warm up again once I’m back on the ski and working hard though.

I’ve actually been in the sea quite a bit lately, what with sea-swimming, surf-skiing and windsurfing. The wind has been fairly good so I’ve managed to squeeze in a number of sessions. I have a different wetsuit for windsurfing. This on is a nice thick 5/3mm suit along with some nice thick boots too. I don’t wear gloves though (however cold it gets) and I’m not wearing a hood at the moment. Although, in the depths of winter I do wear a hooded vest too. The windchill is always a factor when windsurfing. The 5/3mm suit is more than warm enough at the moment, probably a little too warm if there is such a thing whilst in the seas off the UK.

My wetsuits are all quite old, the winter windsurfing suits are at least 12 years old.  They are not quite as water-tight as they were but they still seem to do the trick. As with any outdoor pursuits, there’s no such thing as the wrong weather, just the wrong clothing. So, get your wetsuits on and come on in, the waters lovely.