Phew, it’s been a while since I last did an FTP. Monday morning brought with it time to do a 20 minute FTP test though. My last test was at the beginning of January, an 8 minute test that produced an FTP of 290 Watts. Not great, but it dod result in a slight improvement over my previous test from October.

I wasn’t expecting much of an improvement today for a number of reasons.

That said, I was still hoping for a little bit of an improvement. The Base Phase is over and it’s time to move onto a Build Phase so I was hoping that my Base was at least an improving one.

Today’s test was a full 20 minute test which is always more taxing than the 2x 8 minute test. Probably only mentally rather than physically but even so pacing yourself for a full 20 minute max effort is always difficult. It starts with 30m minutes of warm up though which includes a couple of fast spinning efforts and a 5 minute anaerobic clearing interval designed to make sure that any anaerobic contributions to the 20 minute test are kept to a minimum. The test is after all supposed to be assessing your current level of aerobic fitness.

It shouldn’t really be called a ‘test’ though as there’s no right or wrong answers, the FTP number at the end of it is just a true reflection of your current state of fitness. The real reason for doing it isn’t to see what the number is, but to get a number that can be used for the basis of future training sessions. However you look at it though it should be hard! And hard it was. Here’s the printout from TrainerRoad after the test. 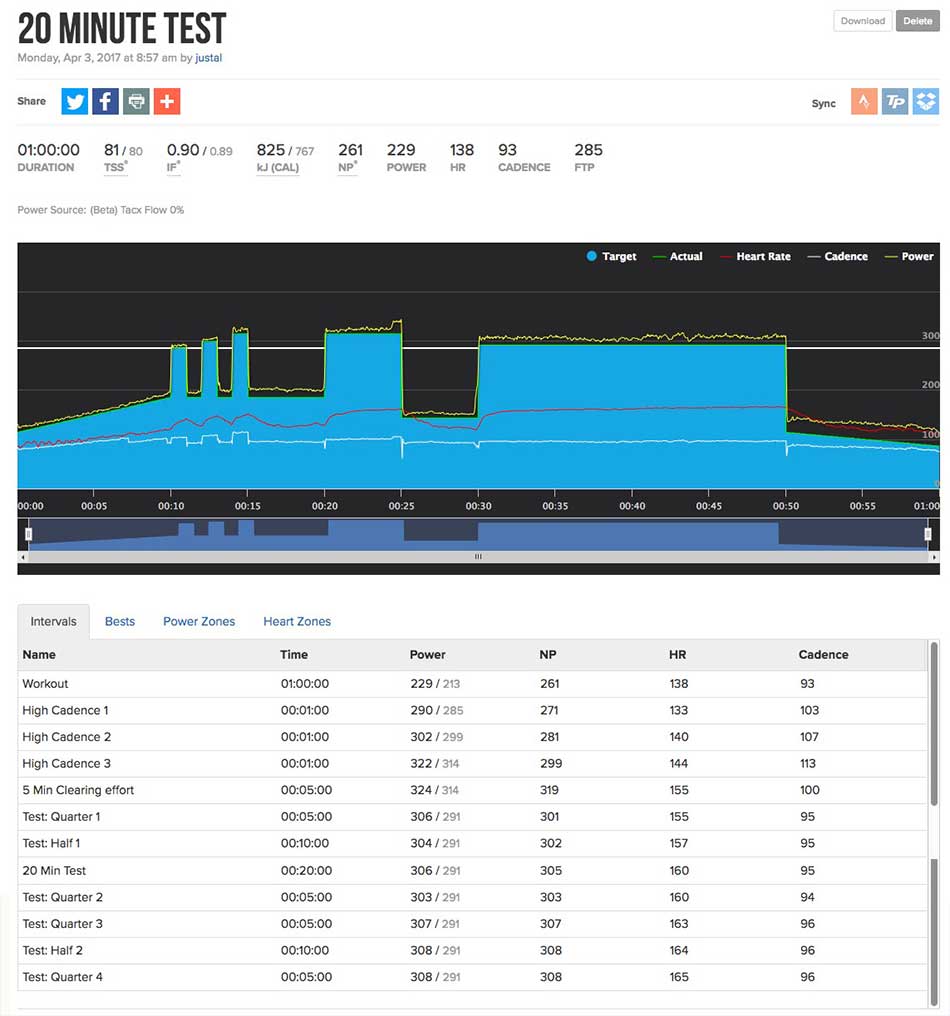 As you can see, I managed to keep going for the whole 20 minutes at a fairly steady power output. I did waver a few times where I lost of bit of concentration but overall it was a good effort at just the right level. I’m not sure that I could have done much more although I did finish it slightly higher than I started so you never know.

The results from the test gave me an FTP of 295 watts. An increase of just 5 watts since my last test. Not much of an improvement but at least it’s moving in the right direction. It does of course mean that any subsequent TrainerRoad workouts will now be based on this slightly higher FTP. This will of course make them harder, but according to todays assessment I should be able to handle it. Only time will tell.

I’m also going to be doing Build Phase workout now rather than Base Phase ones. These are more specifically designed to improve FTP so if I stick with it hopefully there’ll be more improvements to come. Time will tell.