Windsurfing in the Estuary at Ynyslas

I haven’t mentioned Ivor, our local katabatic wind for a while. It is now the time of years when he’s at his strongest though. He’s been ‘blowing a hoolie all week’ so on Sunday morning I headed down to go windsurfing in the estuary at Ynyslas at high tide. The sun was shining, Ivor was up to his tricks and the estuary was deserted. 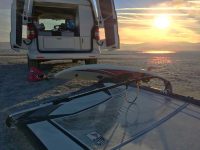 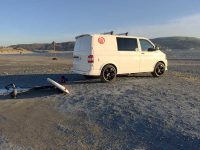 Windsurfing in the Estuary 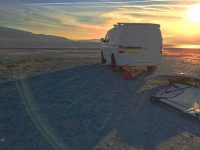 Windsurfing in the Estuary at Ynyslas

The clocks had gone forward so I was on the water by 7:30am BST (6:30am GMT). It was pretty windy out there with a steady 35 knot wind blowing and some bigger gusts. My big wave board and 5m sail were a little too much really. The air temperature wasn’t too bad at around 6ºC but with the wind chill and the cold water my hands were soon in agony. After a quick dip after bouncing out on the chop mid gybe this was soon forgotten about though as ice cream headache took over. I could barely see through the pain so headed back to the beach to warm up a little. Once my hands had thawed out I headed back out for a few more blasts in the chop.

Col and Shem arrived on the beach while I was out there so I came back in for a chat. We also tried to help some guy get his car out for the sand but failed. Shem tried with his pick-up and pulled his bumper off but I think it was because he was rushing to get out on the water. We left him to it as he didn’t really want us to help anyway. We did say we’d help him get out once we’d been out on the water if he was still stuck!

Michelle turned up as well, along with a few other kite-surfers so I went back out while they all got ready. The wind has eased a bit by now and the nasty chop had all but disappeared so things were suddenly a lot easier out there and much more fun. Col soon joined me on the water as did Shem and now the conditions were perfect for a mellow session blasting around on the estuary courtesy of Ivor’s power. The wind continued to drop off though and soon there were occasions when there wasn’t enough. It was also Mother’s Day and I had lots to do so I headed int o pack up. Shem did too. The guy who was stuck in the sand had managed to get free though so we didn’t have to dig him out.

I packed up, trying my best not to get the camper too sandy. I’m still a little precious about it and want to keep it looking nice. I’ve never liked sand either as it gets everywhere but I think I managed OK. I will soon put the Quiverack on the roof for proper windsurf trips but for popping down to go windsurfing in the estuary things fit into the back pretty easily if I put the bed out. I don’t think I even need to wipe it down as I was fairly careful. I might have to wash the bird poo off though as a bird scored a direct hit just after I’d finished cleaning an polishing it yesterday! Then again, it’s being used a removal van later to get some furniture to my nieces house so no doubt will get dirty and messy on that too. I’m going to spend more time cleaning and washing it than using it at this rate. 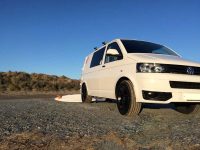 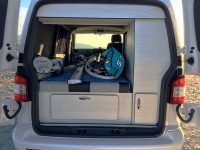 Windsurfing Kit in the Camper 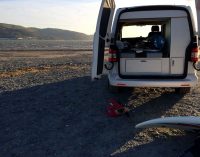 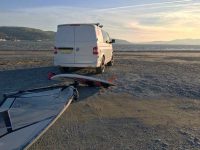 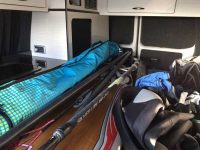