After my first attempt at a Kayak Time Trial a month ago, it was time for a second go. So, on Saturday morning I loaded my Surf Ski onto the camper and headed off to Llanberis and the dark waters of Llyn Padarn. The surf ski seemed more at home on top of the van this time than it did overhanging my little Vauxhall Meriva. However getting it up onto the higher roof in the wind at our house was a bit of a struggle.

The drive up was fine, but the weather certainly wasn’t. It didn’t seem quite so windy inland but it was pouring with rain the whole way. The rivers were in flood and there was standing water everywhere. I had hoped for a nice calm day and the chance to put in a decent time in the Time Trial, but it wasn’t looking likely. I was at least pleased to see that the waters of Llyn Padarn weren’t too rough when I arrived. Last time it had been very windy with some fairly large chop to contend with. Today looked a little calmer, but there was still some wind about.

The others soon arrived and after a little chat and a few weird glances at my ancient ski we got on the water and headed out into the rain for the race. It was difficult to see properly with the rain in our eyes as we made our way across to the kayak time trial start area. Once again, our start times were seeded based on previous performances to create a handicap system that hopefully had us all finishing close together. My previous time of 35:30 had me setting off in 3rd place. I was starting two minutes behind Kamala and Jenny with Norbert 30 seconds behind me and the others behind that.

I headed off at a decent pace into a slight headwind. The two girls ahead of me acting as a carrot to chase and Norbert behind as a stick. I was going well, not too fast for the first hundred metres or so but picking up the pace all the time until I was working hard. I can’t remember if it was still raining, but any rain running down into my eyes was soon replaced with sweat. Before long I had caught Kamala and Jenny and went past them, heading down the lake to the turnaround point.

There were a couple of points where the wind caught me side-on or tried to rip the paddles from my hands but I stayed on and maintained a good pace all the way to the turn-point. I didn’t run aground on the turn this time either and was soon heading back.

I had hoped that what had been a side to head wind on the way there would help on the way back. I’m sure it did but it didn’t feel like it at the time. Maybe I’d gone out a little too hard as I was beginning to suffer on the way back. Not only was I puffing and panting and my heart racing but now my arms were feeling it too. In fact, at one point when a gust of wind hit me and I tensed to stay upright my legs cramped up too. The same happened when I tried to take a glance behind me to see where everyone else was. I couldn’t see anyone though so didn’t trisk cramped legs by trying that again.

Before too long the end was in sight and I powered my way across the finish line with no one else to be seen. I had been pushing hard all the way and my average heart rate had been 159bpm. Pretty high for me and once uploaded to Training Peaks it meant that my LTHR had been increased from 148bpm to 152bpm. Good hard work all around!

You can see from the analysis below that my heart rate stayed at around 160bpm the whole time. You can also see the slight speed discrepancy between the first half into the wind and the second half with a tailwind – It was hard all the way though! 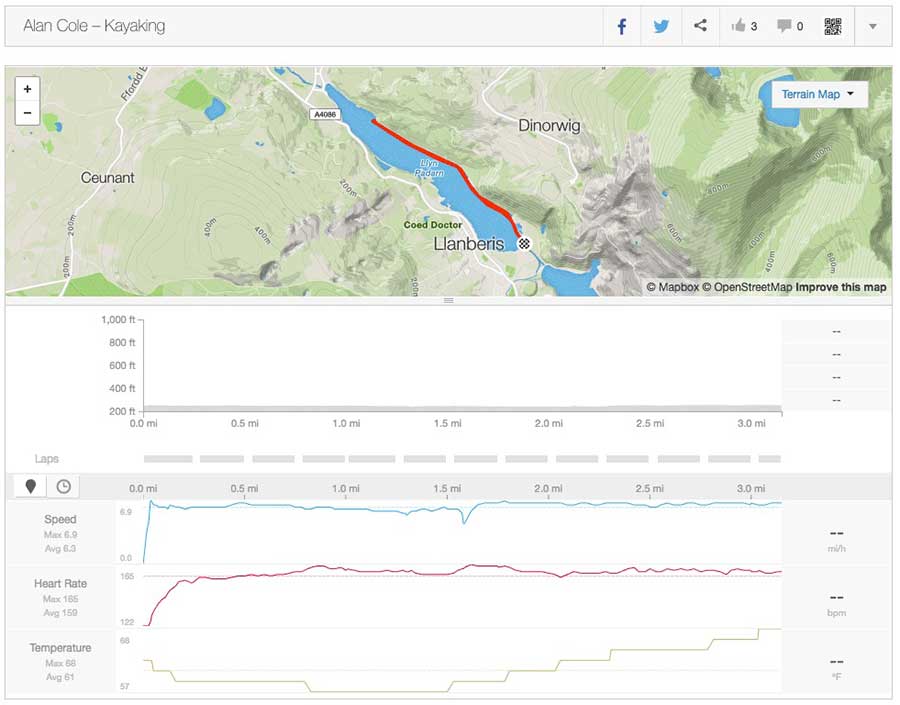 My time this week was 29:48. It was good to get under the 30 minute mark. It was obviously quite an improvement on my previous PB of 35:30. The previous time was in pretty rough conditions though. It was also my first attempt so an improvement was expected. What wasn’t expected was a prize in the overall series. It was the last race of the series and therefore prizes were being given out. Apparently you only have to complete two races to be eligible. The series is all about improvement so, as the ‘most improved’ I’d won the series. I was presented with a Smarties Easter Egg for my efforts!! “Lucky Al” strikes again!! To be fair, it is only a few friends getting together for some fun on the water followed by coffee and cake!

The results are out now though and I came 3rd in Saturday’s race. I’m quite pleased with that time too and now have a few people to try to beat in the future.

It’s a shame it’s the last Llyn Padarn kayak time trial race of the season really. It was good fun with a nice group of people. The weather hadn’t been great but I’m sure that will change and it would have been good to try out a few other boats and paddles once things had warmed up. Maybe I’ll just get in touch with a few of them to see if I can meet them for some informal racing / training during the Spring and Summer. I was also told about an event in Colwyn Bay soon where I might be able to try out some new Surf Ski’s. Whilst looking at such things I’ve been quite taken with an event on the Mawddach Estuary too.

The Colwyn Bay Blast takes place on June 3rd. It includes a 13km kayak time trial race along Colwyn Bay. With sponsor such as Nordic Kayaks, Think, Fyne and Rockpool there should be a range of demo boats to try on the day.

The Mawddach Paddlesports Festival on July 15th & 16th includes a range of events and activities including:

All set within the magnificent Mawddach estuary.

I’m hoping I’ll be able to get to both of these.Mmaybe to try out some potential new toys at the Colwyn Bay Blast and maybe for a family weekend away at the Mawddach Paddlesports Festival. Although, I don’t think it’ll be possible to get our hand-built canoe, my Surf Ski and my SUP all on the roof of the van – we’re going to need a trailer at this rate!