Living it up in Aberystwyth Premier Inn

.Since they started building the new Premier Inn in Aberystwyth, Morgan has been wanting to spend the night there. Not wanting to disappoint we bought him and a friend a night there as a Christmas present. It was all booked for Friday evening. So, after work and school on Friday we popped home to get our overnight things and then headed back in to Aberystwyth to check in.

As a newly built / converted Premier Inn  everything there was immaculate. It was of course very much like any other Premier Inn. It was clean, comfortable and good value and the rooms were large too. 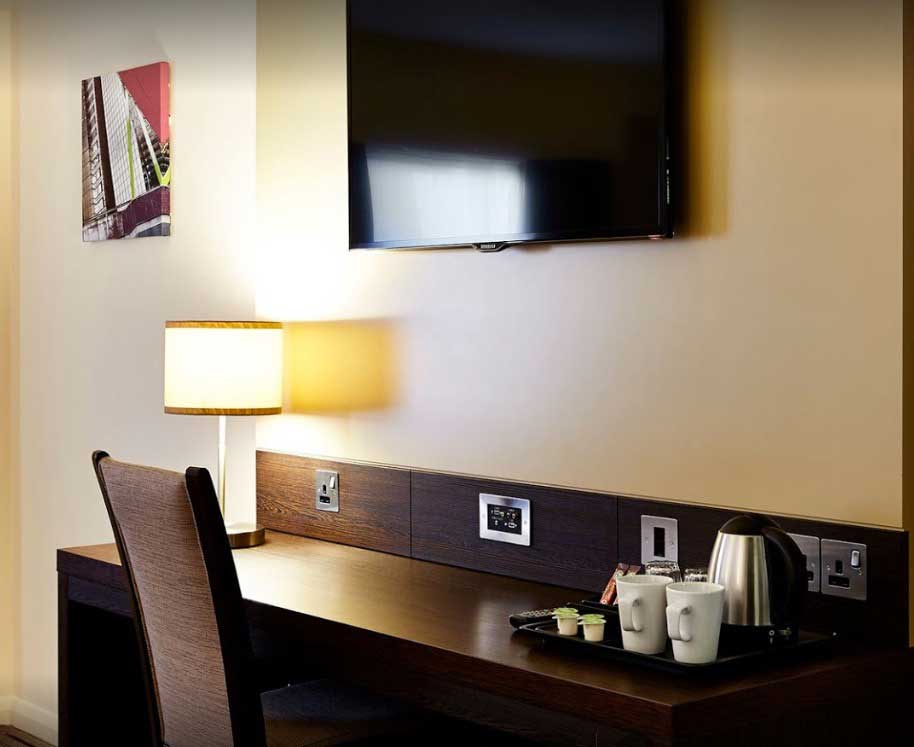 We didn’t eat there that evening but popped into KFC first for a boneless banquet meal before heading off to the Commodore Cinema (which is right next to the Premier Inn). We watched Passengers, then headed back to our room for the night.

The boys seemed to enjoy their night there. I was of course up earlier than everyone else in the morning so saw myself out and went for a walk around Aberystwyth. There wasn’t much going on at that time of day as I walked through the dark streets and along the seafront.

Once back at the Premier Inn I woke the others up, we made the most of the shower and then headed down for breakfast. I was ‘forced’ to have the full ‘eat as much as you can’ breakfast. Forced, because doing so meant that Morgan and James could have a similar breakfast for free. This is normal thanks to Premier Inn’s two kids eat free with every full adult breakfast deal. Bacon, sausages, egg, black pudding, bubble and squeak, hash brown, mushrooms, tomatoes, baked beans, toast, cereal, croissants, flapjacks, yoghurts, fruit, muffins and pancakes were all consumed and washed down with copious amounts of Costa coffee, smoothies and fruit juices.

With breakfast finished and our appetites satiated it was time to check out. Hopefully that had been a fun Christmas present for Morgan.

Back at home I headed out first for a mellow day at Ynyslas. I went surfing on the seafront and then a surf ski paddling in the estuary.

Morgan headed off to his friends for a sleepover while Anna and I headed back into Aberystwyth once more. This time it was for dinner in Brynamlwg and then the Panto at the Arts Centre – Oh yes it was!

Brynamlwg have a new ‘Burger Challenge’ on their menu. If you can eat their huge burger you get pudding for free. I resisted the temptation and went for a normal burger though, only to regret it as I could easily have eaten two of them!

The Panto was fun though (as always). We were there with members of the Aberystwyth Silver Band and saw plenty of other people that we know. The Panto was Jack and the Beanstalk this year. It was very much along the same lines as the panto is every year. It’s good harmless fun and an excuse for an evening out.

What’s more, it was still only Saturday evening so I had all of Sunday to do stuff too. Don’t worry, we didn’t waste Sunday. I ran and swam in Machynlleth followed by toasted tea cakes and coffee in the cafÃ©. I did a few chores around the house and then I went surf ski paddling in the estuary again. We had a nice ‘date night dinner’ thanks to thespicery.com. Anna made some cheese too. Well, hopefully she did. She was attempting to make some cheddar so it’ll be a number of months maturing before we know how it actually turns out.