I’ve been running a weather station here in Ynyslas for a number of years now. I initially installed the weather station in 2005 at the request of a number of kite-surfers and windsurfers from the Midlands. They all used to make regular trips to the coast here but sometimes their trips would be wasted as there would be no wind. More frustrating for them were those days when the wind was blowing and conditions were perfect but they missed out as they didn’t know it was windy here. The Borth and Ynyslas weather station allowed them to see live up to the minute weather data right from the beach here. The data is uploaded every minute to the Borth & Ynyslas Weather Station Web Pages giving subscribers an eye on the weather wherever they are. 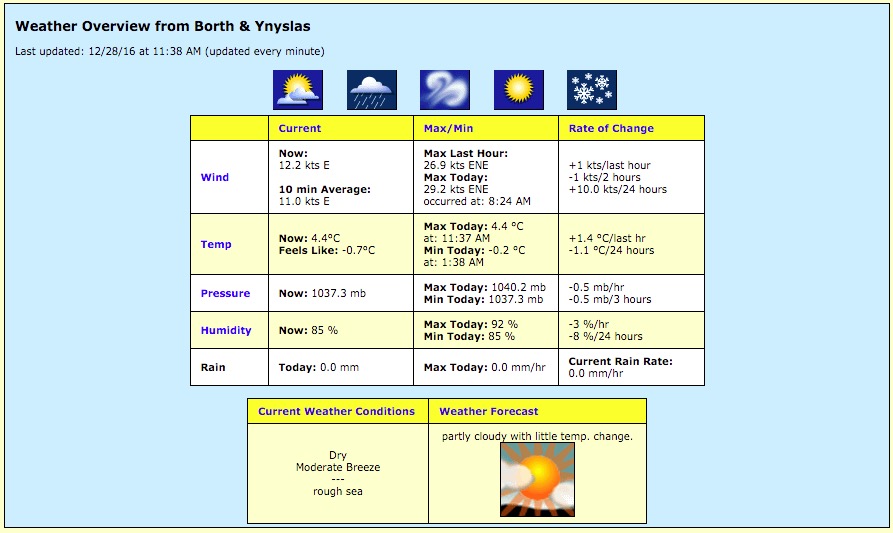 Taking the Brunt of the Weather

In order to record the weather, the various sensors that compose the weather station obviously need to be fully exposed to the ravages that the weather can throw at it. Wind, Rain, Frost, Ice, Snow. Freezing temperatures, extreme heat and blazing sunshine. The weather station components take the brunt of it all, and of course they are also pummelled by sand and salt here so do take quite a beating. I did buy a professional quality (and therefore expensive) Davis VP2 weather station, but things still fail after a while.

I have over the years replaced many parts of the weather station. The temperature and humidity sensor have been replaced a number of times. They were also updated from analogue models to digital models. This update required the main SIM board to be replaced too. I’ve replaced the anemometer once and have replaced the rain gauge reed switch too.

Despite this it was looking quite old and tired. 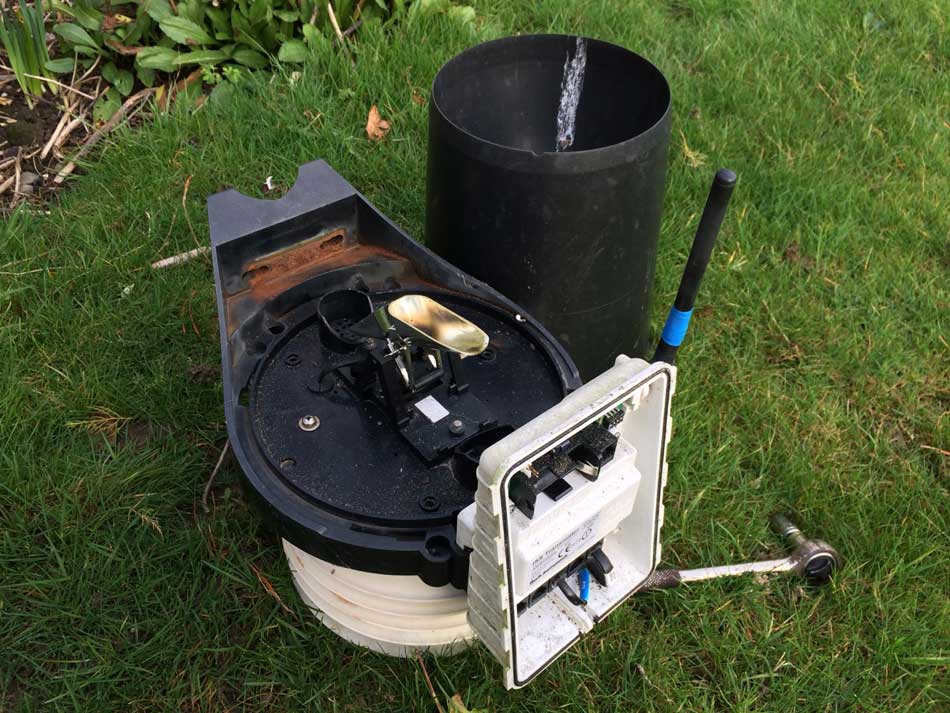 Out with the Old

Recently the anemometer had been reading incorrectly at low wind speeds and needed replacing again. The temperature sensor was playing up too during December. This resulted in some very high and inaccurate temperature readings. It did settle down, but I had decided that it was time to replace some components once again.

I could have just bought a new temperature sensor and anemometer again, but as everything was quite old I thought it was time to replace most of the weather station. The entire system is composed of an Integrated Sensor Suite (ISS) and an anemometer that is located outside. Inside the house there is a console that receives and displays the data from the external sensors, a datalogger that stores the data and a PC that processes the data and uploads it to a custom website that I’ve built. Excluding the PC, the entire system costs around £600. The indoor components all seemed to be working OK though so I thought it woulds be more economical to just replace the outdoor components.

I managed to get all of the outdoor components for just over £400. It was a slightly upgraded model to the one I’d had before too. The temperature sensor was an improved, more accurate model and the rain bucket was a new design complete with bird spikes.

The gadgets all arrived in good time, but then the wind arrived too. I can’t complain as it meant I had some lovely windsurf sessions, but I didn’t fancy going up the telegraph pole with the wind blowing.

Eventually between Christmas and New Year the wind dropped off, it was dry and I had time to install the new weather station. This involved climbing the telegraph pole, removing the old components and attaching the new ones. I then had to get it all communicating wirelessly with the console and then make sure it was then talking to PC as well. Finally I had to go back through some of the old December data and strip out any erroneous data points.

The installation instructions that come with the Davis VP2 station are some of the best instructions I’ve ever read. Each step is detailed in proper English. Everything is in the correct order and they even tell you why you are doing certain things. The instructions get you to assemble everything and check communication between the outdoor components and indoor ones prior to installing it on the pole. This in itself is a sensible step. They then talk you through every step of the installation process.

The anemometer was soon assembled and checked. This goes right at the top of the pole so I donned my climbing harness, climbed the pole and secured myself to the top. Once there I was able to remove the old (sticky) anemometer and install the new one. It’s important to get it facing North so that the wind direction readings are correct. 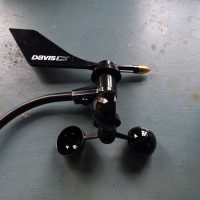 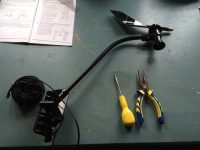 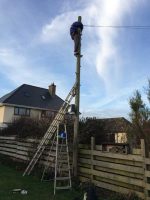 The Integrated Sensor Suite (ISS) is attached further down the pole. The ISS is composed of:

You can also get UV sensors and Solar radiation sensors that can be added to the ISS, and a fan aspirated radiation shield… Maybe I’ll add those one day? 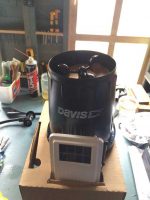 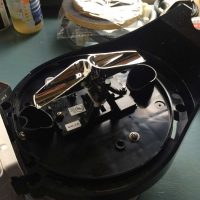 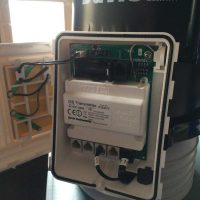 With everything installed it was time to double check communication. Typically it wasn’t working properly at first, but a few little tweaks and all was OK. I had to make a few changes to settings on the PC as well. Once these changes had been made all was working as it should be. 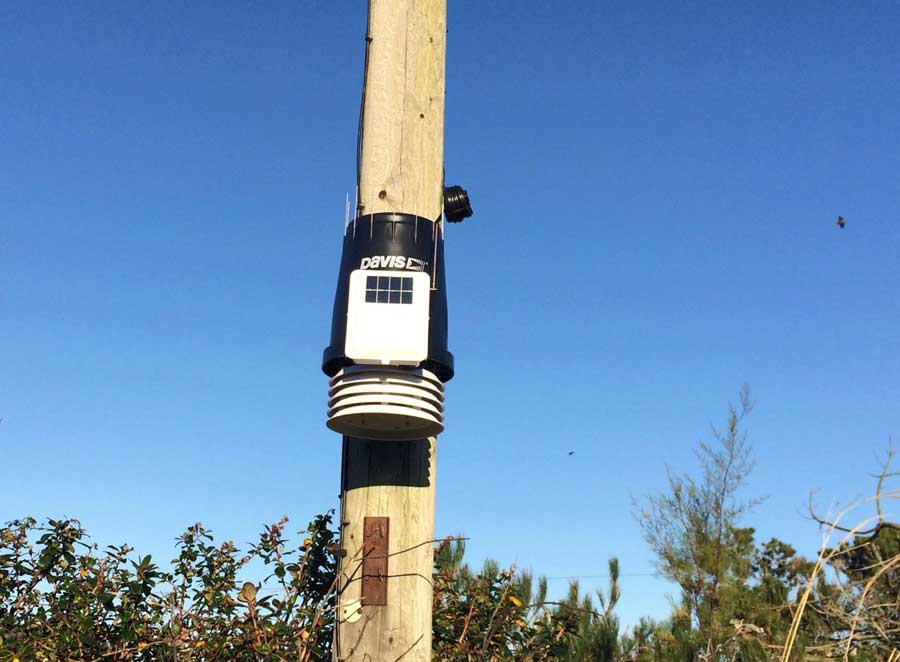 The final step of stripping the erroneous data meant that there was a few days of data missing from our records. Having fewer data points than usual during the month of December 2016 was for me better than having inaccurate data points. Less data has to be better than incorrect data.

With all of this done, the Borth & Ynyslas Weather Station is once again running at full capacity and generating accurate weather data for all to see. I do charge a small (£20) annual fee for people to access the live weather data. I don’t have many subscribers to the service. So few in fact that the money it generates doesn’t anywhere near cover the operating costs, but it does help. I do keep thinking of opening up to everyone for free, but I’d have to find a way of funding it through adverts then and I’m not sure if that would work. For now, it’s just us select few subscribers who are privy to the data!