Cross by the Sea – Welsh Cyclo-cross League Round 10

I missed round 9 of the Welsh Cyclo-cross league last weekend as we were away in Devon. From what I saw though it was an extremely cold, very muddy and showy affair – just what I was expecting from Cyclo-cross really. By contrast round 10 in Pembrey, Cross by the Sea, was clear and sunny with no mud or snow in sight anywhere. In fact I think I’ve been quite lucky with the weather so far for my first season of Cyclo-cross. It’s been dry for every race I think, sunny for mist and the ground conditions have been as good as they could be too. There’s still one more round to go though so there’s still chance, and from what I’ve heard the location of the next round is renowned for being a bit of a mud-bath.

Round 10 on Sunday saw a return to Pembrey for Cross by the Sea. We’d already raced here in Round 3 back in October. That week Anna and I stayed there for the weekend so that I could do the Tide to Tide event as well. This weekend I was just heading down for the day as we had been busy all day Saturday making lanterns with the Scouts, playing in the band and going to the cinema. I wasn’t sure if I was going to do it though as I had been ill for a couple of days before hand with a cold and my knee hasn’t completely healed after last weekends run along the Coast Path in Devon. Lots of Night nurse seemed to have me feeling better by Sunday morning though so I decided to give it a go, especially as the weather was looking so good.

It took just under two hours to get there so I headed off just after 8am in my new car. I’ll tell you about my new car some other time. I arrived not long after 10am and was directed to a different part of the Pembrey Country Park. This week we were based not far from the dry ski slope and ski centre. I parked up, registered, collected my number and timing chip and took in the lay of the land.

It was cold, with a biting wind but the sun was shining and the course looked good. The kids races were underway but after getting changed I was able to ride a few practise laps in between races. The course was good for me with nothing too technical and not too many tight turns. There seemed to be plenty of grip too. It was quite bumpy in places though.

The League so Far

After a bit more hanging around there was time for another two warm up laps before my race. I deposited my jacket in the pits with my mountain bike and we were soon called up into our seeded start grid. There seemed to be quite a few fast people here this week. I was seeded somewhere around 25th in the overall standings and it seemed as though all 24 people ahead of me were here today as I lined up on the third row. Further down the row I spotted Chris who I also knew was faster than me. He was only behind me in the overall standings because he’s only done 5 races so far this year so still had an extra race of points to add to his total. Even with that and what I knew was a bad race for him in Carmarthen where he lost a tyre he was still only a few places behind me. No doubt he would go flying past me before the first corner and that would be the last I;d see of him – unless he lapped me later in the race.

In fact looking at the overall standings there probably wasn’t much I could do to move up them now but there were a number of people behind me eyt to complete 6 races who could easily leap-frog me. The top of the league looked like this going into the race. 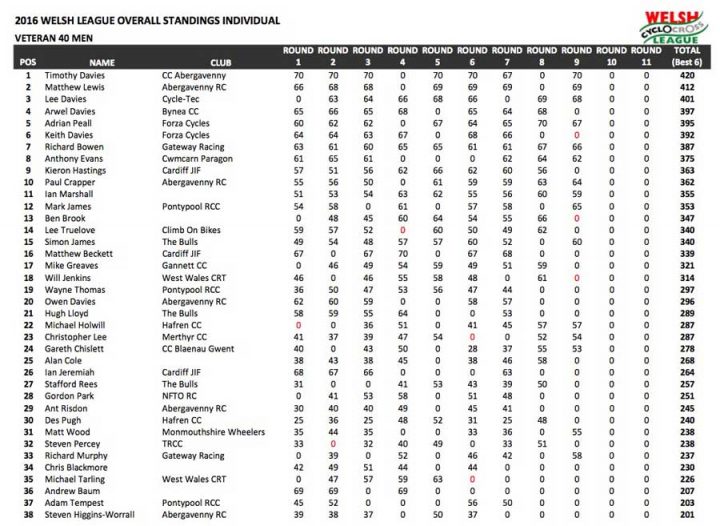 I was in 25th place with 268 points. The best 6 races count so there was still some room for improvement as I had only got 38 points in 3 of my races. If I could better that then I’d add more to my total. The amount I’d add would only be the difference between whatever I scored today and 38 but I was hoping I could improve on that. I do seem to have been getting better as the season progresses so hopefully today would score higher than my first few races. Trouble is, the person ahead of me was 10 points clear so I’d have to score at least 49 points today to move up a place, and that assumed he didn’t race or scored less than 37 points which was his current lowest counting score. That was unlikely to happen. Worse still, the person one place behind me was only 10 points behind me and had only raced in 4 races. He pretty much only had to turn up to overtake me. Similarly there were lots of other people behind me who had yet to do 6 races all of whom had scored highly in the few races that they had done and could therefore easily usurp me. This included Chris who was in 34th place with 230 points but with only 5 races completed.

It’s hard to work out how things will change though and I’m not that bothered about it but the competitive side of it just adds to the fun. As usual on the start line everyone was friendly and chatting and it was a good atmosphere. I have to say that the atmosphere at the races is one of the best things. Everyone seems to know each other and everyone is out to race as hard as they can and of course beat their friends if possible but it’s all in a really good natured way. Just the way it should be really, good healthy, serious competition but just for the fun of it.

Cross by the Sea

Once we were lined up the whistle went and we were off.

I had a fairly good start pretty much holding my position for the most part. Chris did go past me as expected and I was a little tentative going into the first few turns so lst a place or two here. I say lost but really I gave them up – I need to be just a little more assertive at times I think. I then settled in to a nice rhythm. I was working hard but not too hard. I felt OK and was surprised that my legs felt good despite the recent lurgy. I actually managed to overtake Chris as we went into the second lap and then pulled away from him a little. I settle back down and eased of slightly but only enough so that the gap was pegged. 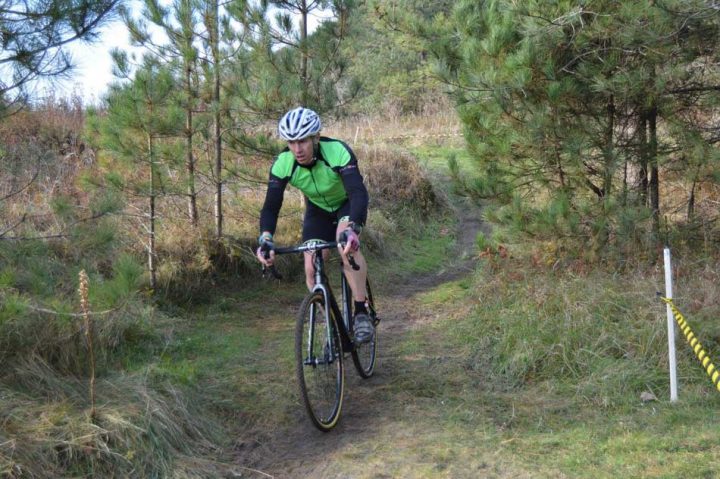 The course was good with a little short climb just after the start and then some fast, wide tracks through the forest. There were a few little twists and turns as you moved from one section of forest track to another, the odd bit of soft sand, a collection of hairpins, the customary hurdles and a final steep but short rise towards the end of the lap. Nothing too difficult and I was coping well with it. This was a fitness and strength course rather than a technical one. It wasn’t a long lap either taking me around 6 ½ minutes but it seemed to take longer than usual for the fastest V50’s or women to overtake me. In fact I don’t think the girls did overtake me today. It also seemed to take a while for the V40 leaders to lap me as well. I however started lapping some of the tail enders fairly soon but as usual everyone got out of the way as best they could.

There wasn’t much battling going on between me and other people today, I just rode my own race, surprised to be ahead of Chris but determined to keep it that way. I was expecting two more laps but the bell sounded so it was just one more to go. Time to pick up the pace a little and finish this thing off. I crossed the line, span my legs for a bit and that was that. Round 10 completed, a good race, a good course and a good day out.

I had a chat with Chris afterwards and he was as surprised as me that I was ahead of him. He said that I was flying! I have definitely improved over my first few races but the fact that he usually laps me also suggests that maybe he wasn’t quite on form today either. Just one more race to go now in a few weeks time. Lets hope it’s a god one and I can get a few more points.