Pedalling and Paddling the Dyfi Estuary

I may have had a busy day on Saturday running 13 miles along the Offa’s Dyke Path from Prestatyn to Bodfari and then strolling around Llyn Brenig, but I was up early on Sunday for some more planned activities in and around the Dyfi Estuary

The first of these was a bike ride around the Dyfi Estuary. I hadn’t been out on my bike for months and with the Shrewsbury Quadrathlon planned for next weekend I thought I should give it a go. Since getting some new deep section rims I’ve been having issues with punctures. I seem to have had a puncture on almost every ride on them so far whereas before that I’d generally ride thousands of miles between puncture. I wasn’t sure what was causing it but on Saturday evening I did strip the wheels down, and look for anything that could cause it. I didn’t find anything obvious  but the rim tape was bent and rucked up in a few places. I cleaned the rims, the inner tubes and the tyres. I re-shaped and re-seated the rim tape and put everything back together. Hopefully that will have sorted it.

With things in order on Saturday evening I was able to set off as it got properly light on Sunday morning. My plan was to ride around the Dyfi Estuary from Ynyslas into Machynlleth and then back out to Aberdyfi before heading back the way I’d come. That’s exactly what I did. The weather was perfect for riding, light winds, cool temperatures and dry. There wasn’t anything in the way of sunshine though. The roads were quiet for the most part and I saw a few other cyclists out for early morning rides too.

It ended up being quite a hard ride though – probably because I hadn’t been out on my bike for a while. It was 46 miles of gently undulating roads with an average speed of 18.3mph. Certainly not fast and it should have felt much easier than that. Hopefully my legs were tired from the previous days run!

Paddling around the Dyfi Estuary

Once back at home I had a quick shower and a banana before loading the van up with my surf ski and heading off to the estuary car park. The wardens were busy setting things up and panicking over the fact that it was going to be a busy day on the beach. With a rising tide they were concerned about people leaving cars on the beach that would then get covered with water. I was of course aware of this likelihood and parked just above yesterdays high tide mark. The high tide today was slightly smaller so I would be fine.

High Tide was at around 12:30 so my plan was to set off at 11am and head upstream with the flooding tide. I would then Stop for ‘lunch’ somewhere and head back downstream with the ebbing tide.

I set off just before 11am leaving the hustle and bustle of Ynyslas behind me as I made my way across the calm waters towards Aberdyfi. This first section was quite slow as I was heading into a strong tidal current. Once out into the main channel though I turned inland and picked up speed. There was just a very slight headwind but the tidal flow was aiding me and I was making good progress. My watch is set to beep at me every 0.25 miles and soon it was doing this every 2 and a quarter minutes. I decided to put in a bit of effort to see if I could get this under 2 minutes and before long I had done a couple of ¼ mile sections in around 1:55 mins. That’s pretty fast going for me on  my surf ski! I was cheating though as the tide was certainly helping quite a bit.

I was keeping to the northern edge of the estuary, passing Picnic Island and the house on the rocky promontory. Then I paddled past rocky shoreline and little hidden beaches. The little headlands here have holiday cottages perched on them with swinging seats overlooking the estuary waters. I glided on past Smugglers Cove Boatyard and made my way between two yachts anchored just offshore in the main channel. Beyond this I followed the curve of the main channel around the bend and into more river-like waters. The tide was still rushing in as I made my way towards Glandyfi with the Ynyshir RSPB Reserve on the far banks. The water was covered in downy feathers here and there were lots of leaves floating on it’s surface too. I paddled on past Glandyi and under the railway bridge at Dyfi Junction. The tide was still rushing in past the uprights of the bridge and swirling around underneath it.

I continued on a little further. My average pace now down around 9 minutes per mile. I was getting hungry and needed a stretch now though so I turned around and headed back towards Glandyfi. I was now battling against the tide so slowed considerably but quarter of an hour or so of this had me back in Glandyfi where I cruised into the muddy, reed covered bank where a boat was moored. I clambered onto the bank, hauled my ski up out of the water and finally stretched out my aching muscles.

Lunch on the Banks of the Dyfi

I’d brought some frozen cocktail sausages with me, along with a banana, an energy bar and a drink. The sausages had yet to defrost though so I ate the banana and had a little snooze on the grass, using my buoyancy aid as a pillow. 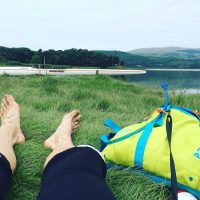 Lunch on the Shores of the Dyfi 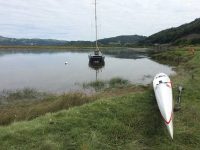 The sausages soon defrosted once out of my dry bag so I ate them and watched the world go by. Half an hour or so of sitting here and the tide was beginning to turn. Time for the journey back. 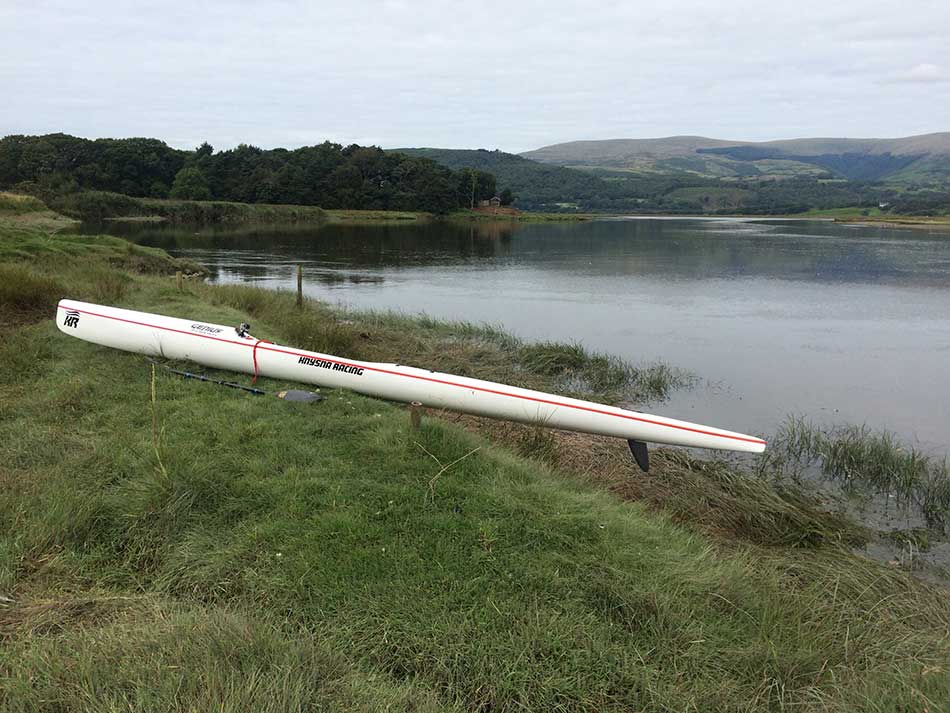 Waiting for the Tide to Turn

I had a bite of energy bar and a slurp of drink and climbed back aboard. I had to launch from within the grass and reeds. The wind had now picked up a little and once again it was a headwind. There was little if any tidal assistance yet either so my pace wasn’t great as I set off back the way I’d come.

Things got a little choppier at some points too but I felt good on my ski and was making good progress. I am definitely getting better at surf skiing and felt perfectly stable and at home the whole way. There were a couple of other people heading for the bank in a canoe not long after I set off, and then some people out water-skiing by the boat yard. I pulled into a little beach at one point for another little break. I was quite tired now – not surprising really having paddled 10 miles and having a ride and run in my legs already. I finished off my energy bar, had another drink, chatted to a family on the beach and then headed off again. I did notice some huge bits of grass and weed caught around my rudder as I was about to set off. No wonder things had been difficult these last couple of miles as this had obviously been there since setting off from the reeds in Glandyfi.

As I approached Aberdyfi I caught up with a catamaran motoring it’s way across the estuary and then headed off towards Ynyslas. It was looking busy on the beach now with row upon row of cars all lined up along the shore. There were jet ski’s everywhere now. I tried to keep out of their way but in doing so ran aground on a sandbank. I had to get out and drag my ski through the ankle deep water into the channel where I could continue on my way. Now being buzzed by jet skis. I finally made it safely back to where I started from.

I hefted my ski onto my shoulder and made my way across the slippery mud of the samphire beds. I left my ski on the beach and extracted my van from the rows of cars. I wasn’t going to be able to get through them and to the van with a 6.2m ski on my shoulder so instead took the van to the ski, loaded it up and headed home.

Another busy day and I was now tired. Anna had been baking courgette and mushroom bread so after sorting out my kit and showerinf we chilled for the rest of the afternoon, ate dinner and then headed back down to the estuary on foot. We had an ice cream as the holiday-makers left the beach and then strolled home along the seafront as the sun set. 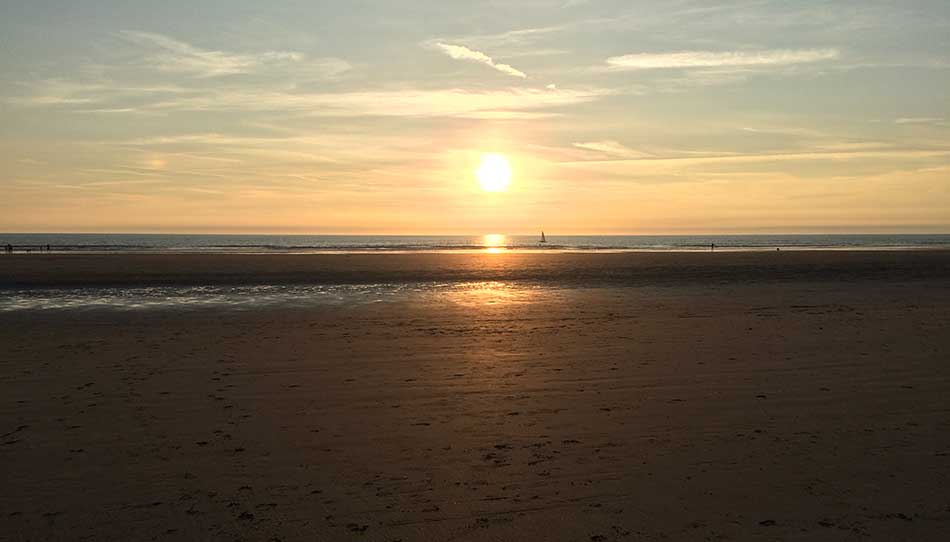