I had a bit of a change to my usual Wales Coast Path Run this week. We were down on the South Coast so that Anna could attend a River Cottage HQ cheese-making course that I’d bought her for her birthday. So, while she was at that all day on Sunday I decided to run along the coast path from Axmouth to Lyme Regis, which took me through the Axmouth-Lyme Regis Undercliffs Nature Reserve.

We had spent the night in the Honiton Premier Inn so started the day with an all you can eat breakfast. Smoothie, fry up, granola, yoghurts, toast, croissants, pastries and loads of cups of coffees later and we were ready for the day. We’d arrived in Honiton on Saturday evening but the weather was terrible and there didn’t seem to be much to do there. the highlight of our time in Honiton was a trip to Aldi! The breakfast was nice though. 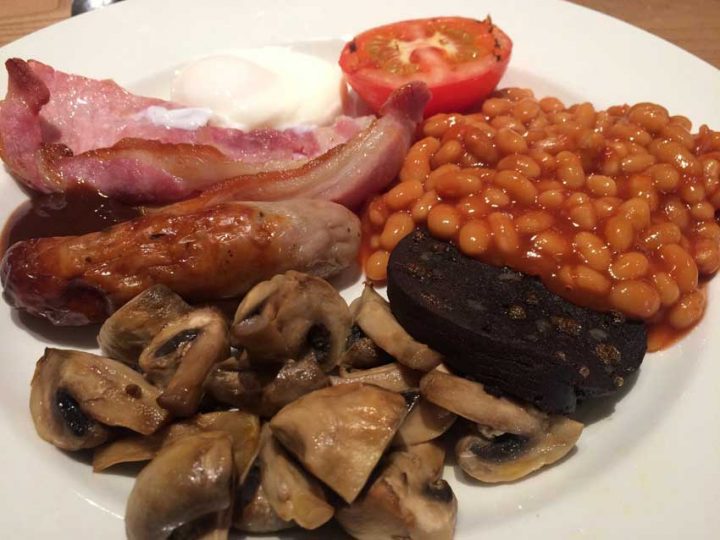 We packed up, jumped in the car and drove the 20 minutes or so to River Cottage HQ. 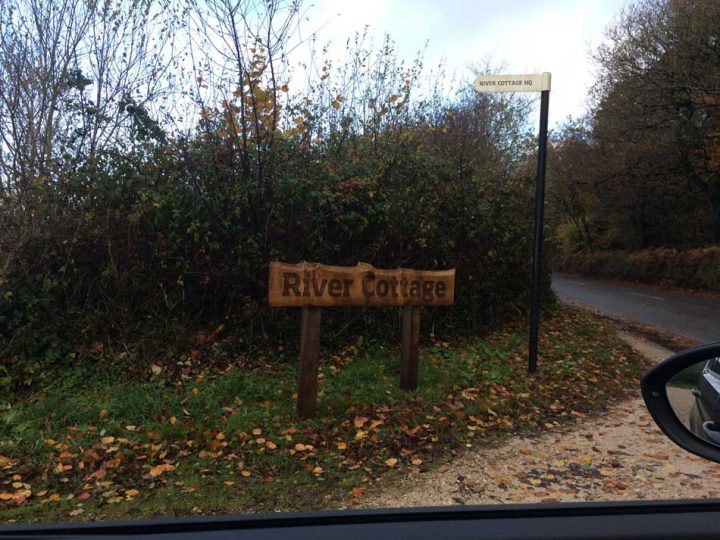 Before long the tractor arrived to whisk Anna off for her cheese-making course. I’m sure she will blog about this soon as she had a really good day there and got well fed too by the sounds of it.

I headed off towards Seaton, checked out the seafront and  then found a little layby to park in just beyond Axmouth. 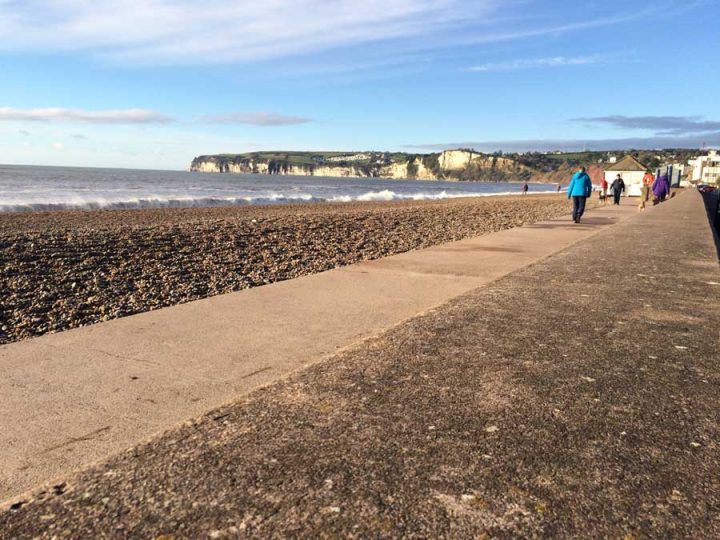 I got changed, found a geocache along the banks of the River Axe and then started my run. It was a lovely day for it, cool with blue skies, just a bit of cloud here and there and a large swell pounding the pebbly beaches of the south coast. The layby was right next to a Coast Path sign that directed me towards Lyme Regis which was 7 ½ miles away. 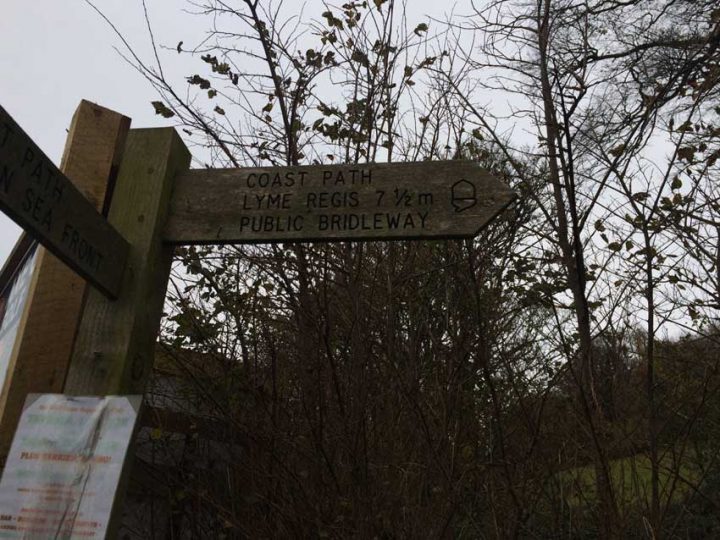 The Coast Path took me straight up a steep hill and then through a Golf Course so I started off steadily and stopped now and then to take a look at the lines of swell rolling into Seaton behind me.

Looking back to Seaton 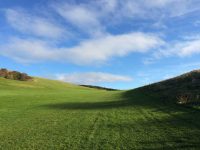 At the top of the Golf Course the path took me along a little lane to the top of the hill and then turned right towards the coast. There was a sign here that made it sound as though the route to Lyme Regis may be more difficult than I thought. Although, quite how it  could take 4 hours I didn’t know! 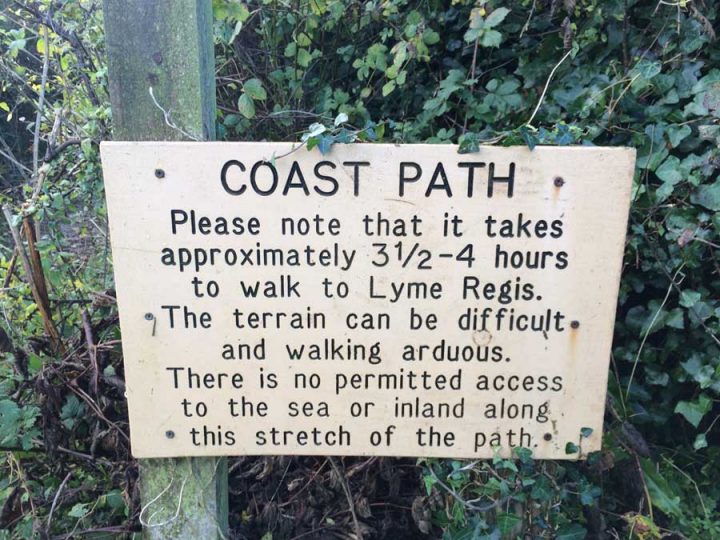 The Coast path then took me through a couple of fields, across some grassy slopes and then into the Axmouth-Lyme Regis Undercliffs Nature Reserve.

There were yet more warning signs.

There was now less than 6 miles to Lyme Regis, but the signs were saying that it takes most people at least 3 ½ hours – maybe the terrain was about to get difficult! I was expecting the whole trip there and back to take less than 4 hours, and that included the mile or so outside of the nature reserve as well! The signs were suggesting that it would take twice that time. 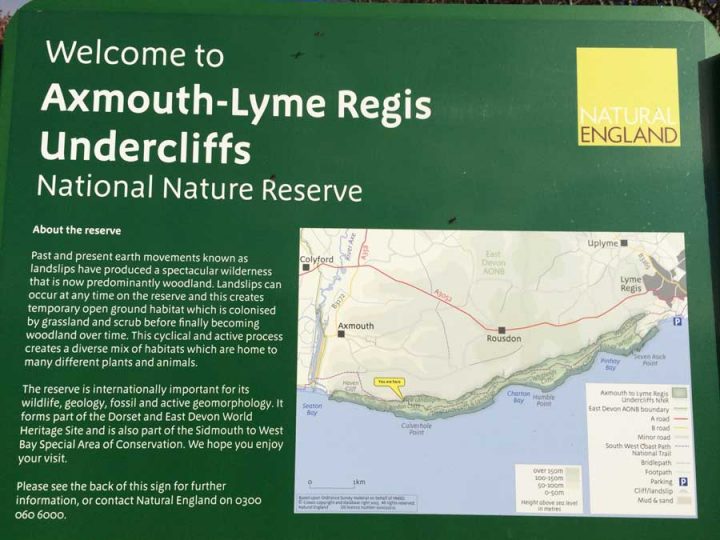 The terrain did indeed change as I entered the woods. The path took me down some steps, then up some steps and then path became muddy, leaf-covered and slippery. It wasn’t possible to run down the steep ladder-like steps as they were just too steep and slippery. Running up them wasn’t easy either. The path twisted and turned as it weaved its way through the trees and every step involved a slip of some type. Mud, rocks and roots were all treacherously slippery as I teetered my way along the path. I could rarely see more than a few feet in front of myself either as the path turned first one way then the other. The recent storms had left lots of fallen trees across the path too. I had to clamber over these and crawl under others. I was hurdling over fallen branches and other obstacles, bounding from foot to foot over rocks and tip-toeing between slick, slippery roots as I made my way ever onwards towards Lyme Regis. Vegetation across the path had me ducking under it and my feet were soon soaked through as I splashed through deep muddles (I meant to type ‘puddles’ there but it came out as ‘muddles’ so I’ve left it as that is a much better word for the deep, gloopy muddy puddles that they were). My legs were soon caked in mud. 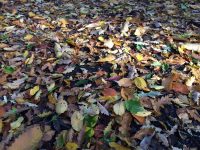 This was just what I was hoping for, a fun, interesting trail run without too much in the way of proper, smooth paths. I couldn’t see much of the sea though. I could hear the waves pounding the pebbly beach far below, but where I was felt more like a jungle path than a coast path. Sunlight shone through the trees here and there, but despite the huge amount of leaves on the floor, there was still quite a bit of shelter under the canopy. Ivy clung to the trunks and branches and the floor was covered in ferns, their deep glossy leaves slick with water. 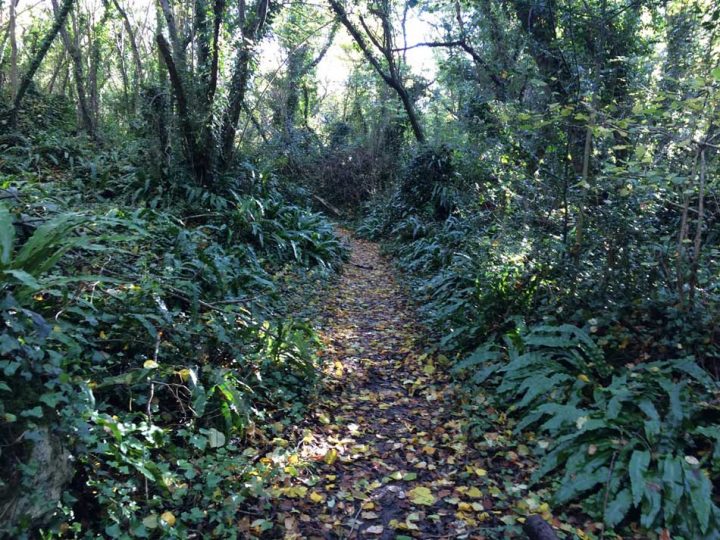 I was taking it easy, keeping up a decent pace for the terrain and covering the ground well. The ever present steps provided a chance for a little break here and there. 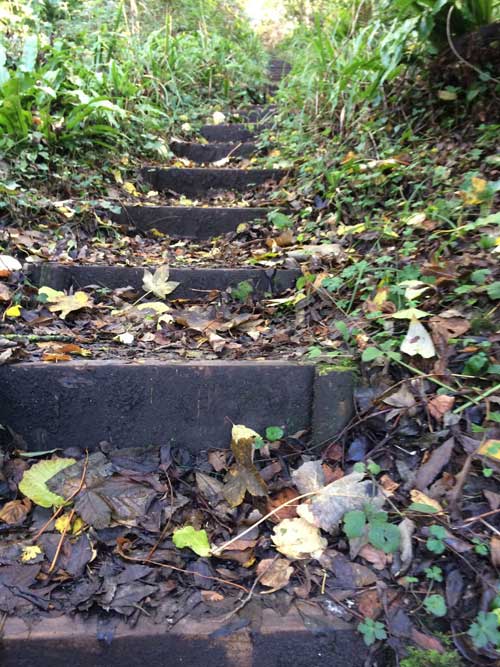 After about 4 miles though I felt a bit of soreness in my right knee. I continued on hoping that it would go away. I walked now and then when the pain got worse hoping it would ease, but it wasn’t getting any better. Before long I was walking all the time as any running was really painful. After a couple of miles of walk-running and then just walking I finally got a glimpse of Lyme Regis through the trees. 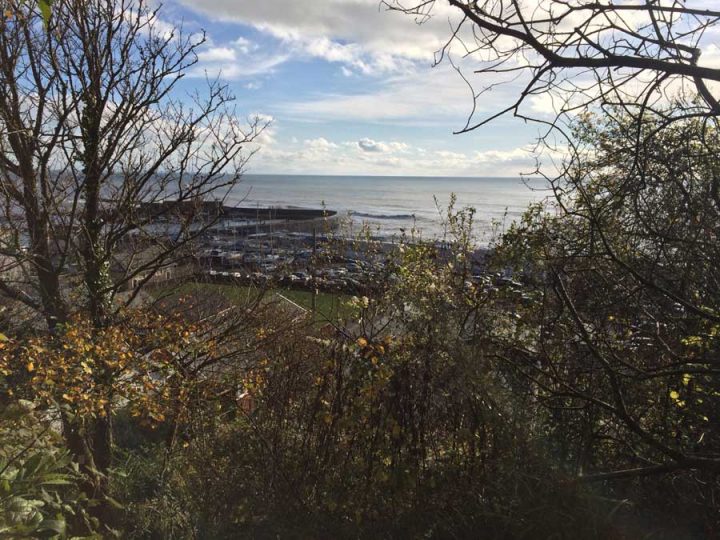 Lyme Regis through the Trees

The path than opened up and descended steeply into Lyme Regis. Going down hill really hurt my knee, but once walking through the car park and taking a few photos of the waves smashing against The Cobb I was able to sit down and chill for 5 minutes in the hope that my knee would stop hurting. A little girl commented to her Dad about my muddy legs as I sat there watching the waves wash over the top of The Cobb. 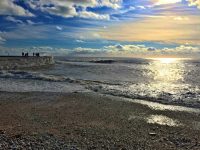 Waves at The Cobb

I’d forgotten to bring any water with me so I popped into a pub to get some and then started my journey back, retracing my steps up the hill towards the woodland again. Going up the hill was fine and I hoped that my knee would be OK for the 7 miles back to the car. Once on the flat though it was clear that this wasn’t going to be the case. Worse still, as soon as there was the slightest of descents my knee was in agony. I had to hop down the hills as I simply couldn’t put any weight on it. I found myself a fallen branch and made a walking stick from it and then started limping my way back.

The uphills and going up flights of steps were just about OK, I could hobble along the flats with my stick too, but going down steps or downhill was a painful and slow process. I did discover that hopping and skipping along was slightly less painful so the final few miles were performed mainly on my left leg as I counted down the distance in 1/4 mile increments – one lap of a track at a time!

The final steep descent to my car was ridiculous. The pain was immense, I only had a few hundred yards to go but I could only inch down the road one small step at a time. I made it though, got changed and checked my stats. Despite hopping on one leg most of the way back and only running the first half of the way there, I had still finished the whole trip (there and back) in under four hours – How in the world would it take anyone more than that in just one direction?

Not only that, but according to Strava, my one-legged journey back was the 10 fastest time overall as well!

Shame I hadn’t been able to run it properly as I had started out intending to take it easy there and then pick up the pace on the way back.

One changed, I still wasn’t hungry thanks to my huge breakfast so I headed into Seaton for a coffee and watched the waves breaking on the beach. 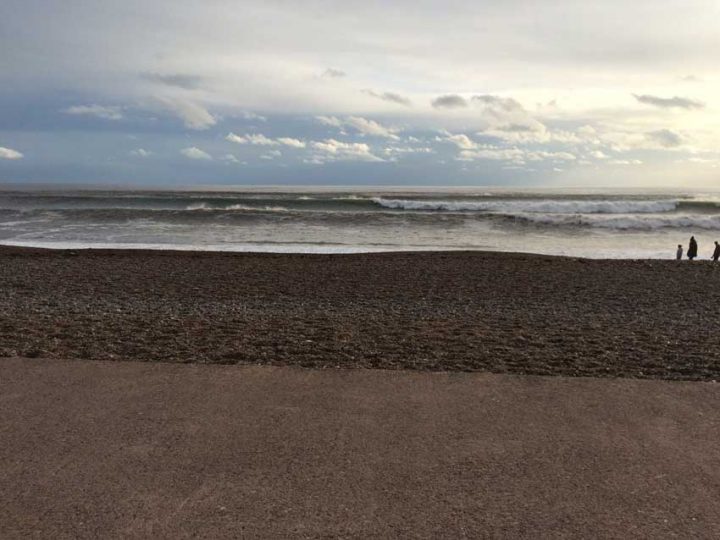 I then headed back to River Cottage HQ to collect Anna and start our journey back to my parents house in Gloucestershire. Anna told me about herecheese-making and the amazing food she had been served at River Cottage and before long we had made our way through the dark night to my parents. Not the best of days on the Coast Path thanks to a knee failure but hopefully whatever is wrong with it will heal up soon.