Would you believe it, despite being deep into autumn it was yet again a gorgeous day for my coast path run from Amlwch to Red Wharf Bay. Yep, I’m still negotiating Anglesey in my attempt to run around Wales, but I’m now coming down it’s eastern side and will soon be heading back to the mainland. Today was going to be a difficult one though. It wasn’t too far at close to 18 miles and the terrain didn’t look too tough, but I had something of an ankle injury. It’s been sore after my last few coast path runs but has generally been feeling better after a weeks relative rest and has held up for the run itself. This week though it was still sore on Monday night. I was fairly certain that it was going to cause problems. I probably shouldn’t have gone for the run but the forecast was ideal and I have a long way to go so need to tick off the miles.

The drive up was once again nice and quick. It was dark most of the way with starry skies. I parked in Amlwch, got kitted up and headed off past the little harbour and out onto the cliff-top path. The sun was just rising up over the horizon as I set off. 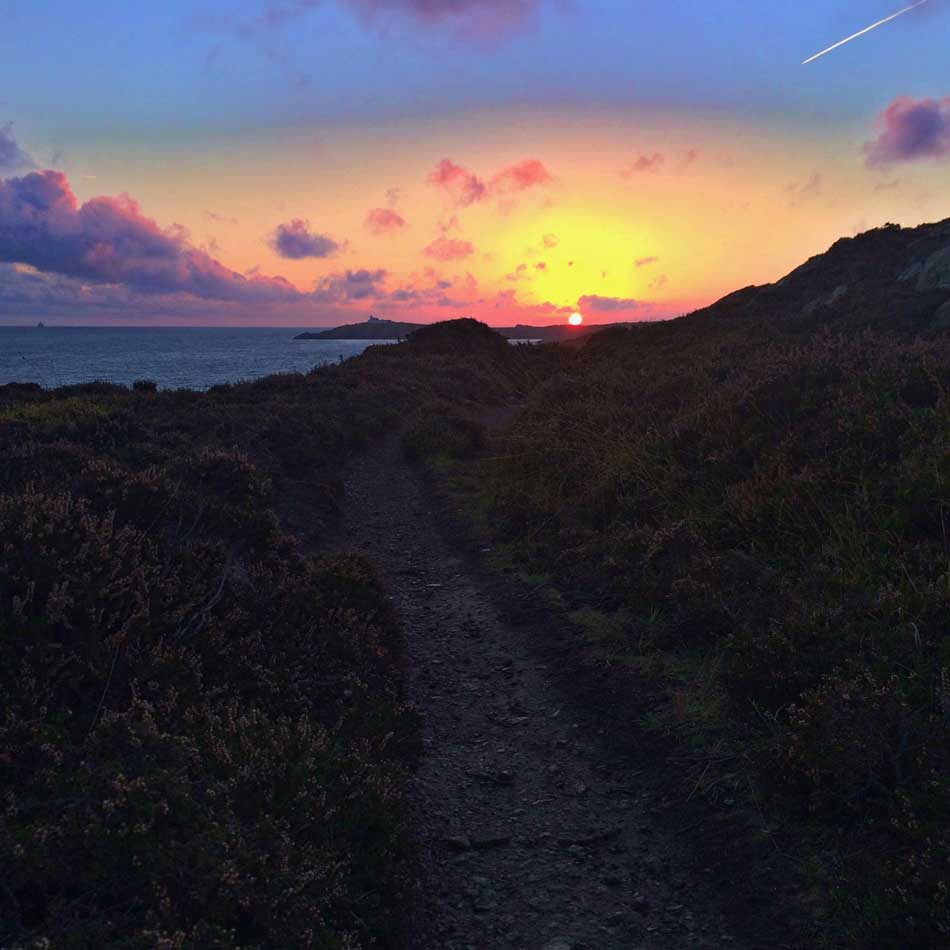 The path soon became typical coast path. Rocky, slippery, twisty and uppy-downy too. I was having to concentrate on foot placement in the early morning light but my pace was steady as I made my way through the bracken covered cliff tops. The path dropped down to little bridges over tumbling streams every now and then all the while clinging to the cliffs above a fairly calm sea. There was a bit of a headwind here and there, but nothing too bad. 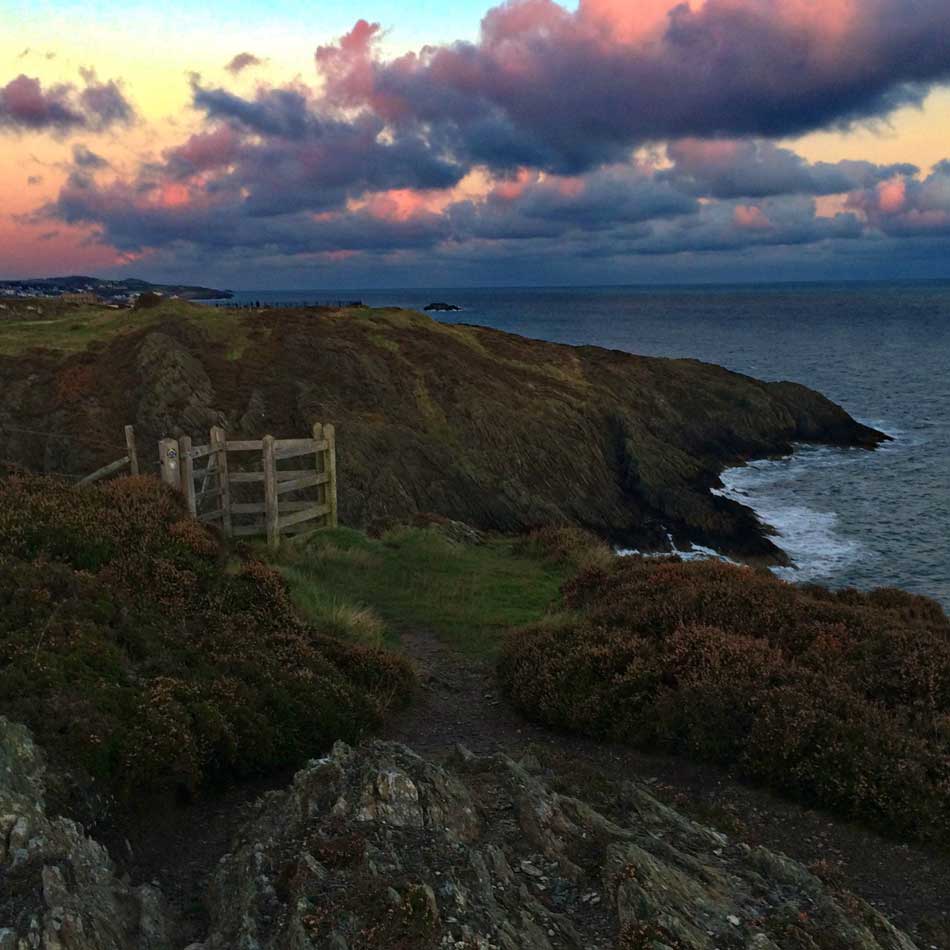 At one point I passed the location of a holy well which was alongside a little waterfall. The light was improving now but keeping an eye on foot placement wasn’t any easier thanks to the  gorse and bracken covering the path. 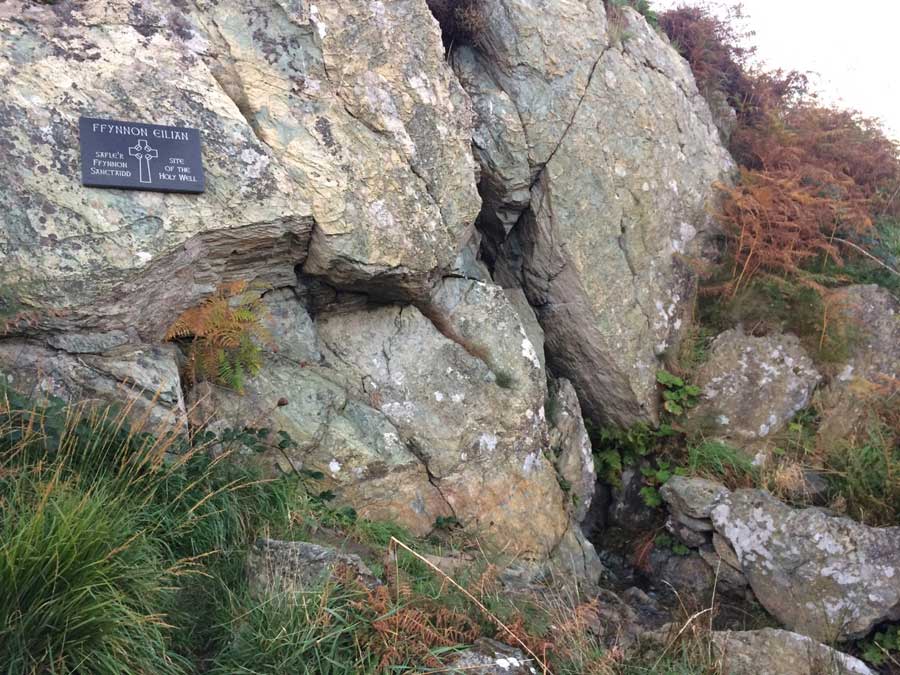 The path continued in a mainly ESE direction, all the while heading towards the prominent Point Lynas which was marked by a lighthouse and several tall masts. The morning sun was bathing the coast in a glorious light.

I eventually made it to the small cove of Porth Eilian which today was sheltered from the wind by Point Lynas. I was less than 3 miles into my run and feeling good. My ankle seemed OK so far but was feeling a little weak. 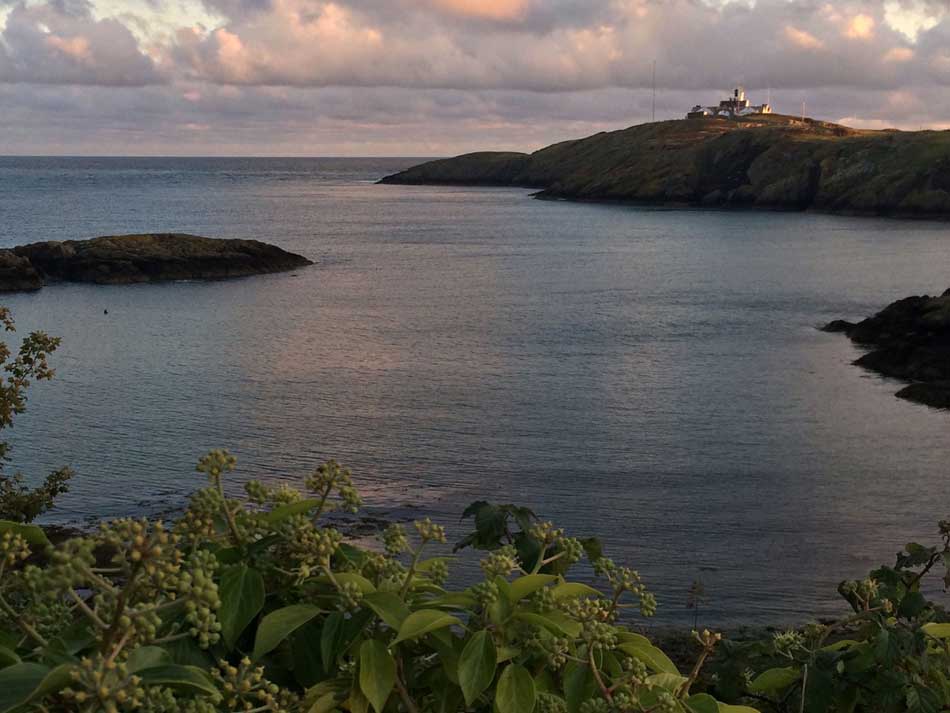 The path doesn’t go out to the lighthouse itself but instead cuts across the bottom of the point and out onto what today was the more exposed eastern coast of Anglesey. 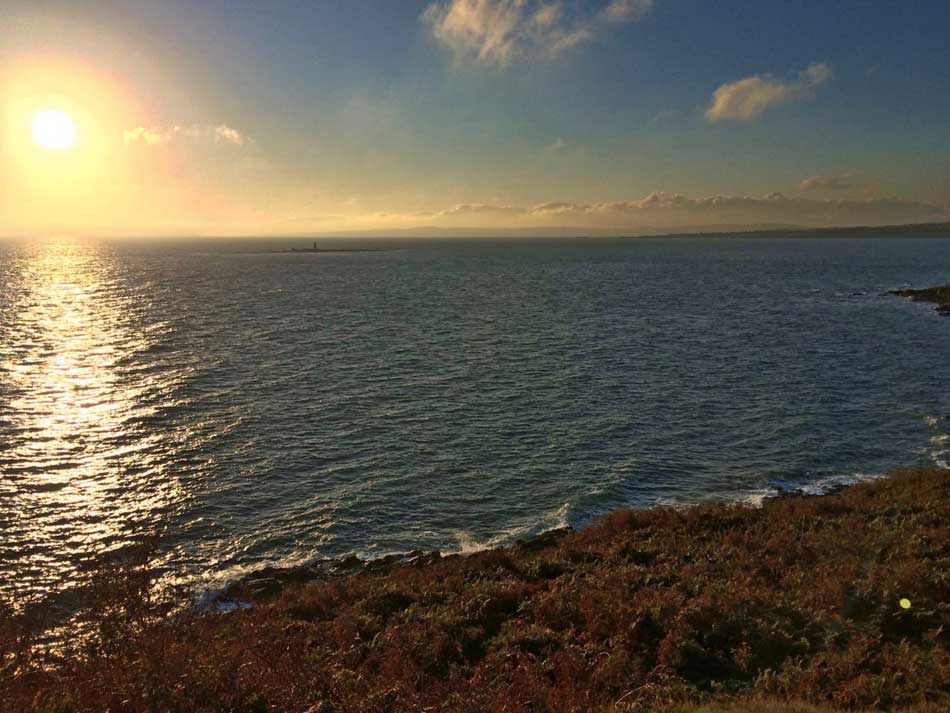 Here the Coast Path rose up along grassy paths and then back down through wet fields. The recent rain showers made it muddy in places but the mud was never too deep. There were a few steep ascents and descents and these were beginning to make my ankle sore. By mile 5 it was hurting but I continued on, keeping up a nice easy, steady pace. The steep terrain, mud, rocks and occasional stiles, gates and bridges meant I was bumbling along at around 11:30 mins/mile.

Route finding was easy today with well-signposted paths that generally hugged the coast. 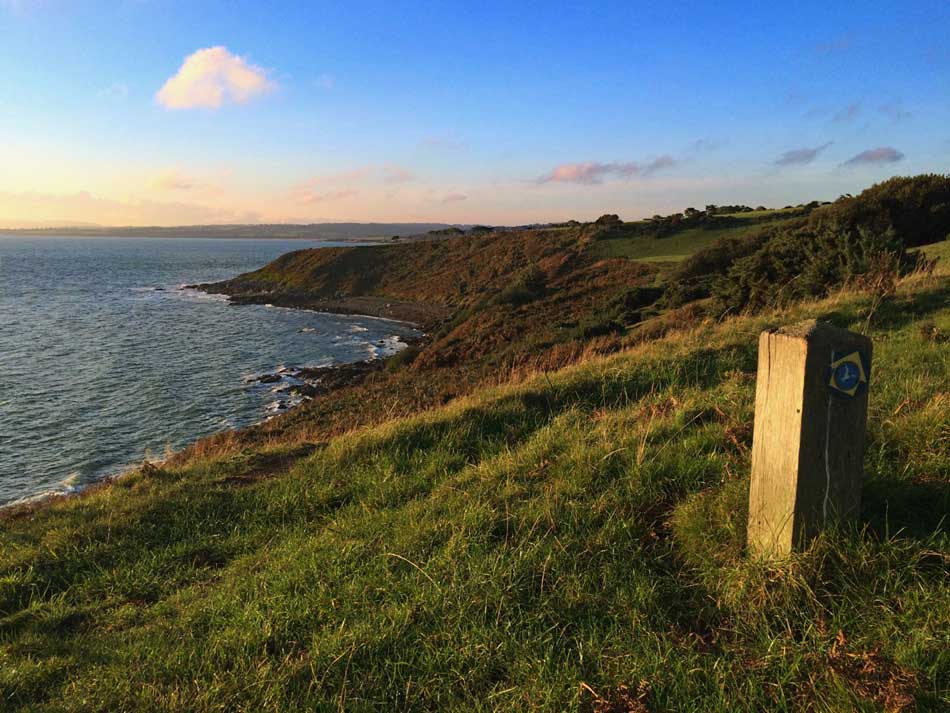 The path did take me inland, uphill through some very wet grassy fields in which cows were grazing. They scattered when I came along and then ran around the field in a haphazard manner for a while before heading off to the far corner. The path then took me along a  few tracks and out onto a small road through some farms and a little hamlet. It then headed back downhill to emerge on the shores of Traeth Dulas. This is a large sand and shingle bay in which a large hulk of a ship was resting. The path along its northern shore was wet but passable as I made my way through the rushes and on towards a footbridge. 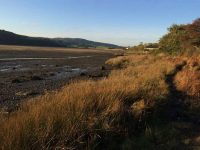 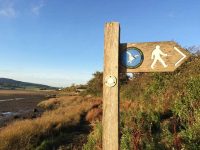 The footbridge took me over the Afon Goch which spills out into Traeth Dulas and then uphill through yet more wet grass before emerging briefly out onto the A5025. I soon left the road behind though as the coast path headed back towards the coast through fields full of sheep and pheasants. The terrain became ever more coastal once again and eventually made it to the sea at Traeth yr Ora.

My ankle was now quite sore. It hurt on every step, and any particularly energetic steps would result in shooting pain. It wasn’t far before I arrived at the lovely sweep of sand that is Lligwy Bay. The sun was now fully up and the deserted beach looked lovely.

From here, the geology suddenly changed as I made my way out onto limestone cliffs. The bedding planes of these sedimentary rocks formed flat wave-cut platforms encrusted with fossilised oysters. 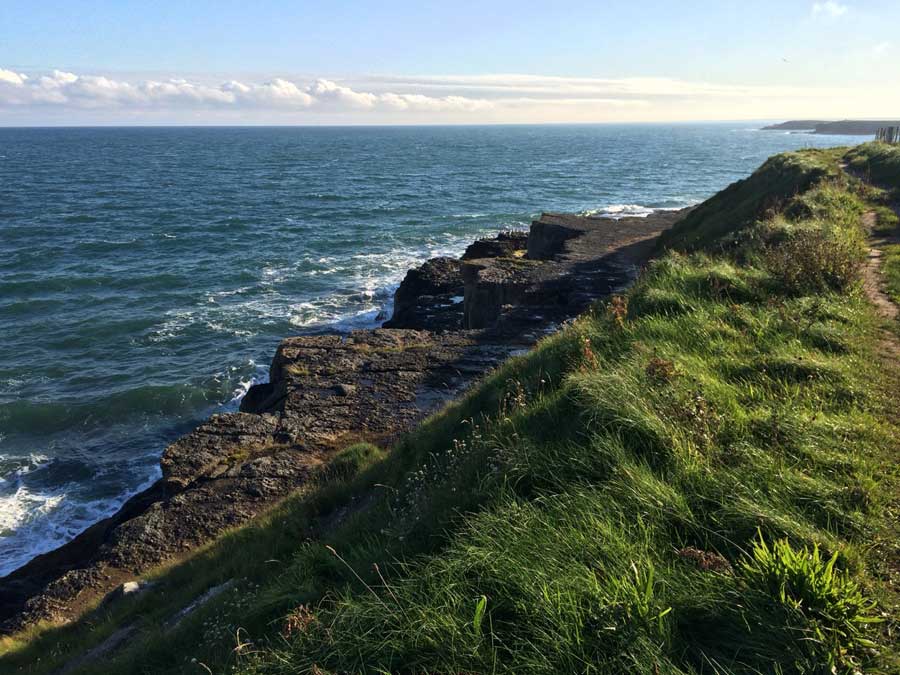 I soon rounded the point at Moelfre where the distinctive shape of Ynys Moelfre came into view. 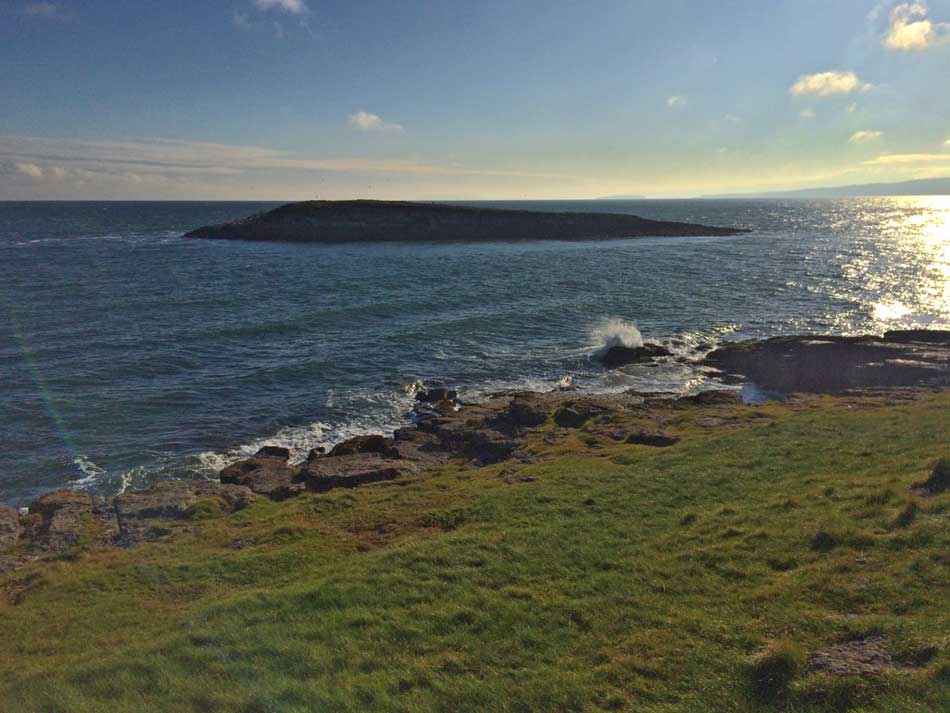 My ankle was now in agony and I could have stopped here as there was a bus that would take me back to Amlwch, but I’d only done 12 miles so I wanted to continue. It was also a lovely day for being on the coast path. The pain did however soon reduce me to walking. It still hurt with every step I took, but it was nowhere near the agony of running. I therefore decided to continue on but to walk most of the way. Maybe the pain would ease later and I’d be able to pick up the pace again?

The village of Moelfre was quiet, but it was only 9:30am as I made my way through it’s streets and back out onto the coast path. The village is dominated by it’s lifeboat station and various commemorative statues and plaques to lifeboat men. Looking back at it from the coast path the village was bigger than I thought. 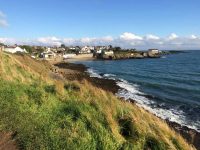 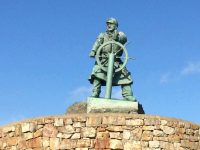 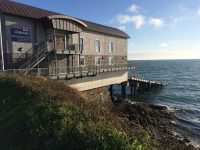 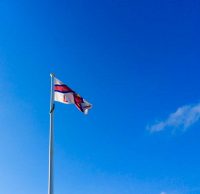 On I went, now walking but trying to keep the pain at bay. My ankle was well strapped up but still it hurt and it was getting worse with every step. I did try to run again at one point but there was no way that was happening so it was a long slow walk to Red Wharf Bay for me. 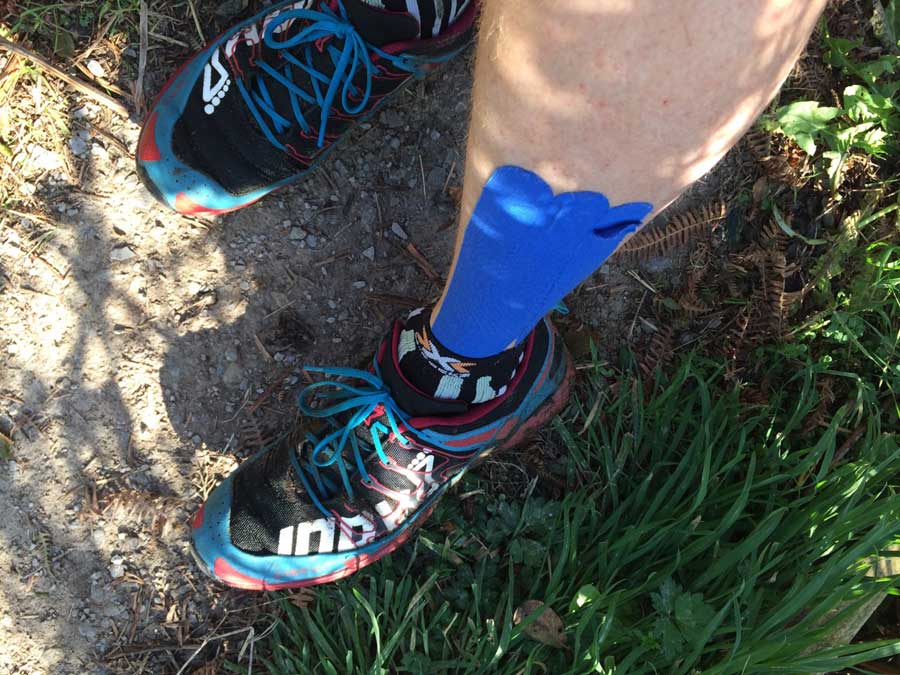 The views of course didn’t disappoint as I started making my way south towards Benllech. I took to the beach at Traeth Bychan and was soon clambering over barnacle and slippery seaweed encrusted rocks. I wouldn’t have been able to run over this section even if my ankle was OK – that did at least make me feel a little better about my lack of pace now that I was walking. 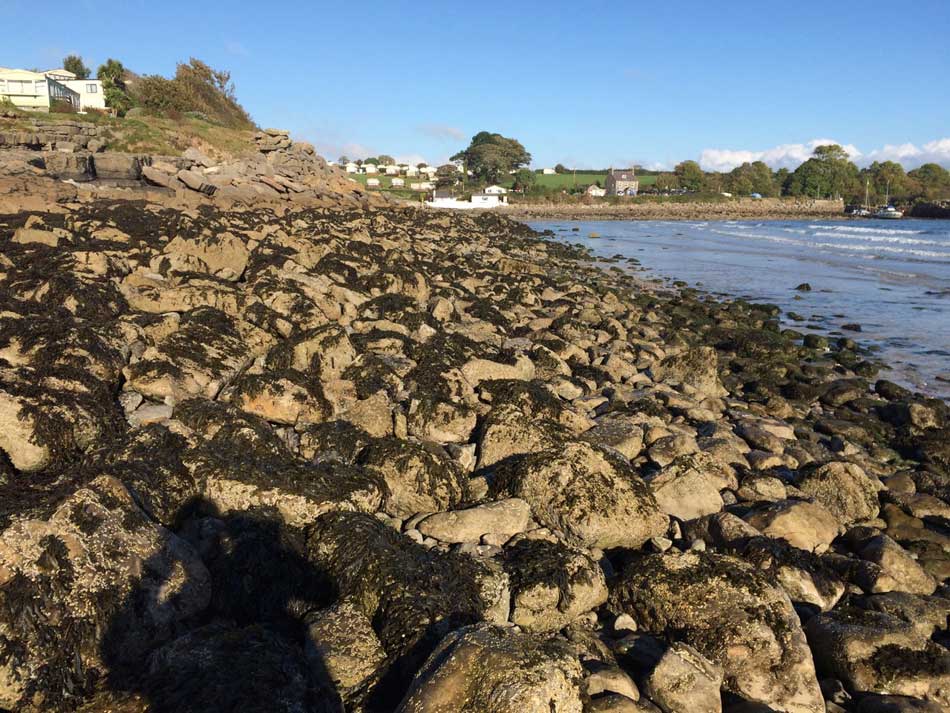 Once these were negotiated I walked across the sun-soaked sands of the Traeth Bychan and then up through a caravan site towards a rocky point. 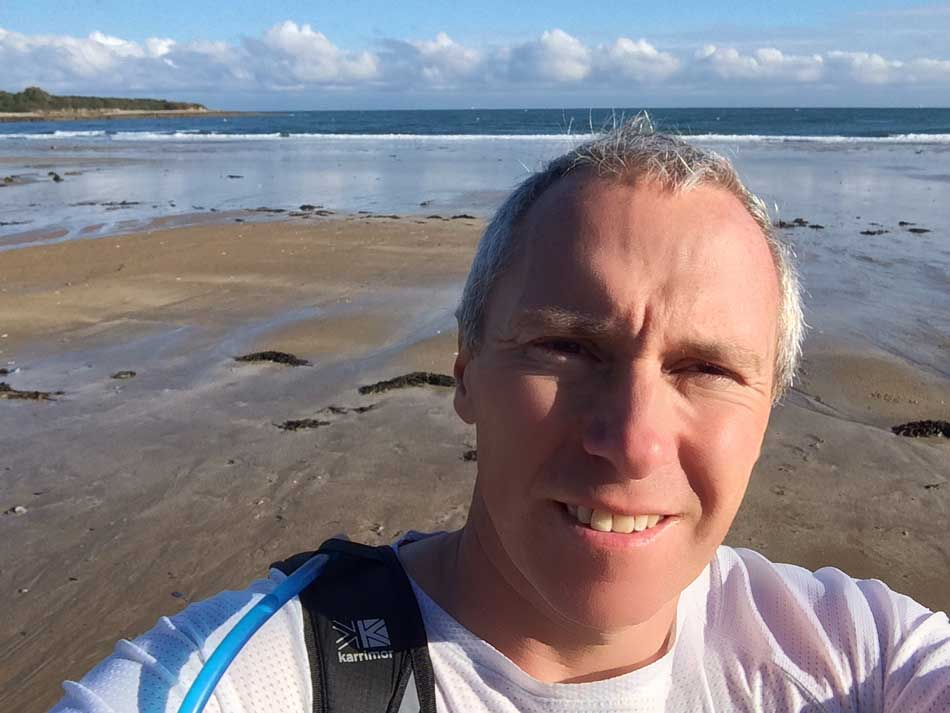 There was a quirky little cottage perched on the end of this point. 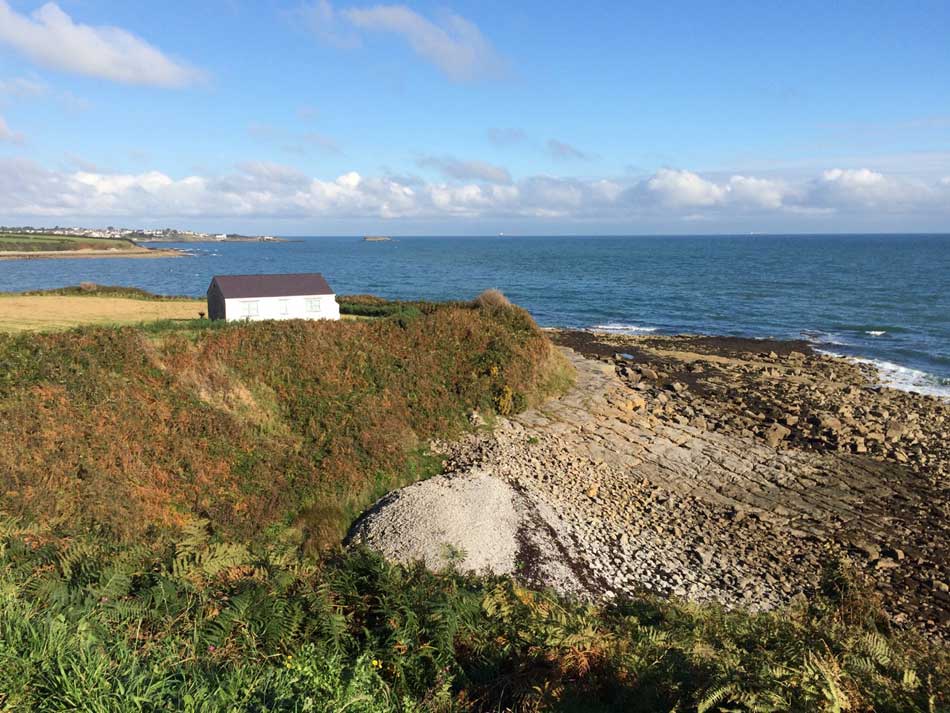 I then climbed up onto the tops of some high limestone cliffs. The tops of these were densely wooded in places. I could hear the sea below but couldn’t always see it thanks to the dense woodland and undergrowth. All the while I was making my way slowly towards the sands of Benllech. 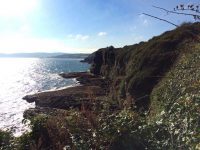 The Coast Path came out onto the road at Benllech and then past shuttered ice cream huts. Presumably in the summer Benllech would be full of holiday-makers but a Tuesday morning in October see’s it as a sleepy little village with no one but dog-walkers out on the sands.

The path took me along a sandy track behind the beach and then up behind a caravan site past some disused quarries and on to Castell Mawr. Next it weaved its way through another caravan site, along some lanes thick in fallen autumnal leaves and then onto well-trod paths behind the expansive Red Wharf Bay. The paths here were in the trees which are sandwiched between limestone cliffs and the massive expanse of sands. There are a number of flights of wooden steps to negotiate too which didn’t help my ankle at all. Once out onto the shore I passed a few pubs and car parks at Red Wharf Bay before making my way up behind some large buildings – I couldn’t quite make out what they were.

I was nearly there now, just another half mile or so along some narrow country paths and then out onto a road at Porth-llongdy-uchaf. 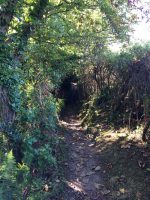 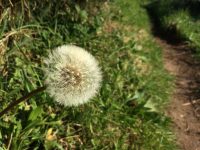 From here it was just a short walk along a small country road to the junction. There was an odd antiques shop here and a bus-stop in the sun. I sat and waited half an hour for the bus to arrive. It was on time and I was soon making my way back towards Amlwch, passing the obvious scar on the landscape of Parys Mountain.

The drive home didn’t help my ankle at all, neither did the subsequent bath. I think I’m going to be hobbling around a for a while. Annoying really as the rest of me was perfectly happy to run all day long, it’s just that my ankle can’t do so. I’ll probably have to rest it for a while now so I may not finish the rest of Anglesey for a few weeks yet.