We’d been chomping at the bit to get out in our new self-built canoe, that (for obvious reasons) we had christened ‘Fingers Crossed’ Since getting it home I;d given it a few more coats of varnish and it was now ready to go. The weather was set fair yesterday so a plan was made for a maiden canoe voyage after work. Anna and I finished work a 3pm, collected Morgan from school, headed home and then we all got changed into wetsuits, loaded the canoe onto the car and drove the 1/2 mile to the estuary.

The tide was already quite low and going out quite fast so after carrying across the mud we launched it with ‘Fingers Crossed’ that it would float. All seemed fine so we headed off into the estuary heading upstream against the tide into the mouth of the River Leri and back again.

The canoe itself seemed fine. No leaks that we were aware of and it floated well with the three of us in it. It was a little rear heavy, but that can be sorted with some judicious packing of kit or by shifting one of the seats forward a little. It seemed to handle well though and tracked quite nicely through the water, even with our dubious paddling techniques – we’ll get better at that though now that we are confident that it floats.

The tide had gone out quite a way by the time we got back to the beach so we had a little bit of mud to wade through. I didn’t find it that bad, but somehow Anna and Morgan managed to get stuck in it and ended up completely covered in thick sticky mud. 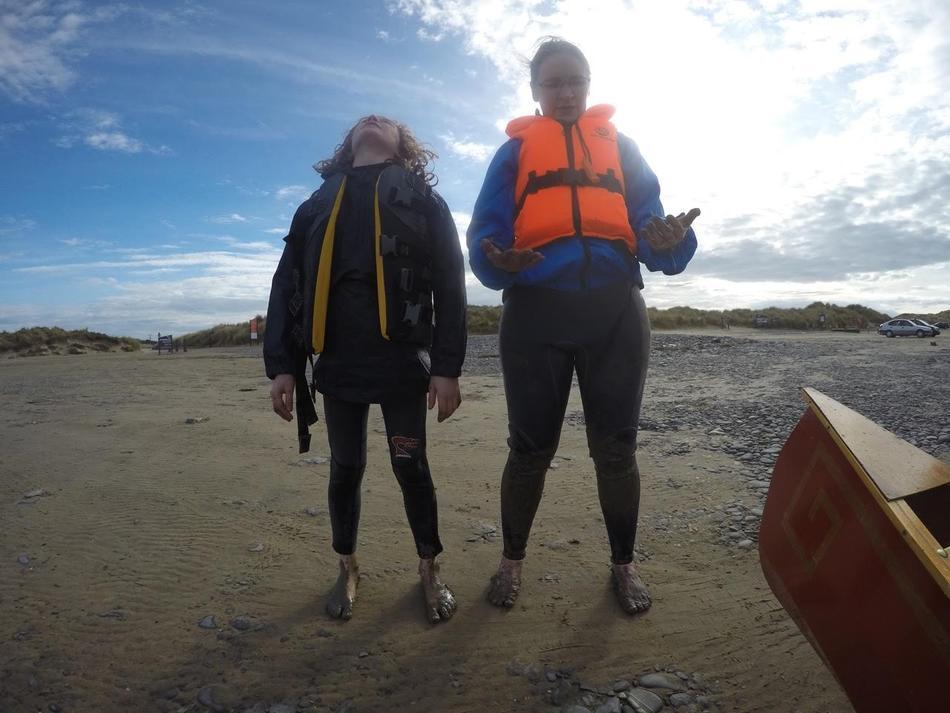 The next job is to kit it out with a few little fittings such as bow and stern painters and some attachment points to tie in kit. A bailer and sponge might be handy too as a fair bit of water gets in from paddling and from getting in and out in the shallows. We had a fun little paddle though and can’t wait to go off on some little adventures in her now.