A New Drive – Day One

As Anna and I are both working so much at the moment and things are hectic to say the least at work, we couldn’t be at home while the workmen have been working on our drive. It’s a little weird really as we left the house at 8am and everything was as it always has been with our drive – muddy, potholed and full of puddles. By the time we returned at 6pm though it had been transformed as 11 lorry loads of material had been scraped off dug up and carted away. 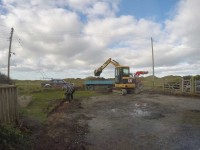 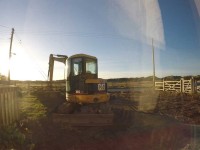 It’s quite exciting really and we wish we could be there to make the workmen cups of tea and slices of cake, but that just isn’t possible at the moment. I did set my GoPro up to record the whole process by taking a series of 1500 photos in timelapse mode so we could at least see what was going on whilst we were away. It took a while to create a little video from them, but I got there in the end and now have a new technique for doing it that is a little quicker so hopefully subsequent days won’t take so long to process.

I quite enjoyed added the sound effects for the aeroplanes as they flew over! As I said before, things would get worse for the drive before they got better and we are currently parking next door as all we had by the end of day 1 was a giant sand pit with the odd house brick lurking in it and a great big digger, but it’s progress and we’re looking forward to having a proper drive sometime soon.