Happy New Year everyone, 2016 was upon us so we had to get out and do something, and we had to find a geocache so as to complete the “Goodbye 2015, Hello 2016” geocaching souvenir. Our target for the day was the Hafod Estate and several geocaches there.

I would have liked to have gone for a New Years Day swim in the sea but I have a shoulder injury at the moment so can’t swim. Instead I packed my running kit and planned to do a trail run around the Hafod Estate whilst we were there. Getting Morgan out of the house was the usual nightmare – What is it with 10 year old boys and going out – surely they should want to be outside running around and getting mucky? Not Morgan, and in the end we had to literally bundle him into the car, banning him from his computer for a couple of days at the same time! Well, this was going to be a fun family day out!

The drive to Hafod via Devil’s Bridge was a quiet one with barely any cars on the road and Morgan not saying a word, except to start with when he decided to shout for a while about the fact that we don’t care about him! Once there, we wrapped up as it was one of the colder days we’ve had recently with temperatures around normal at 4ºC rather then the weird warm weather we’ve had all winter so far. It wasn’t raining at least which was a change. It was quite wet underfoot though and muddy in places as we headed off into the valley for geocache number one of the day next to a cascading waterfall. 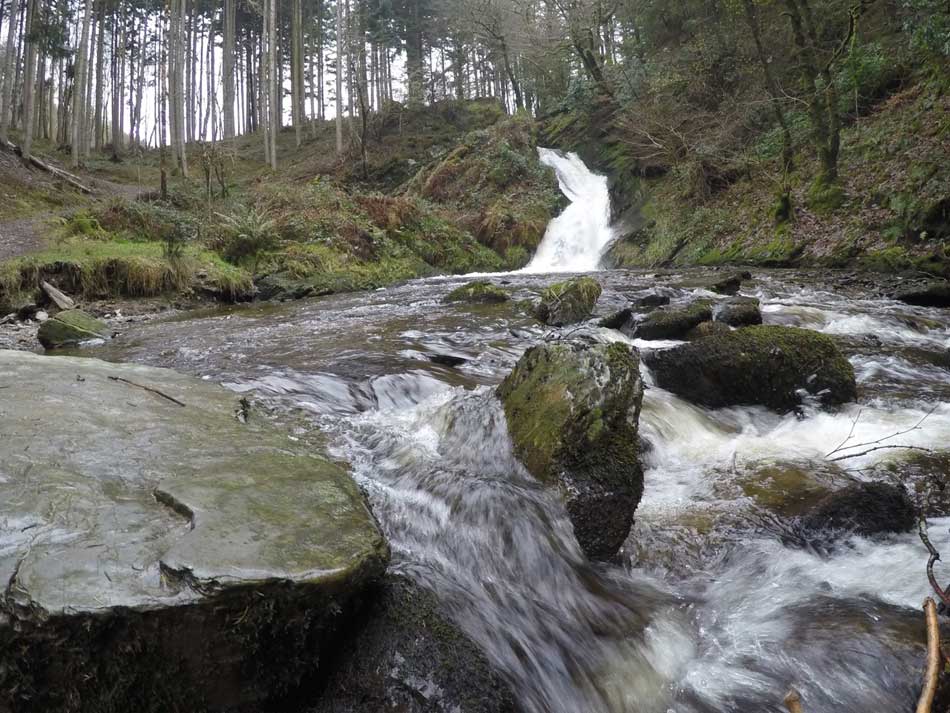 This cache had a travel bug in it as well, and we had remembered to bring some travel bugs that we had picked up elsewhere so we exchanged travel bugs here too. You don’t have to exchange travel bugs, you can just collect them and move them on but as we had some that needed dropping off, an exchange seemed like a good idea.

We then walked off along the trail a little looking for geocache number two of the day which was alongside the Ystwyth River. This one wasn’t hidden that well and the coordinates were way off, but with the help of a few previous logs, we found it, signed the logbook and continued on our way walking along the banks of the Ystwyth River. 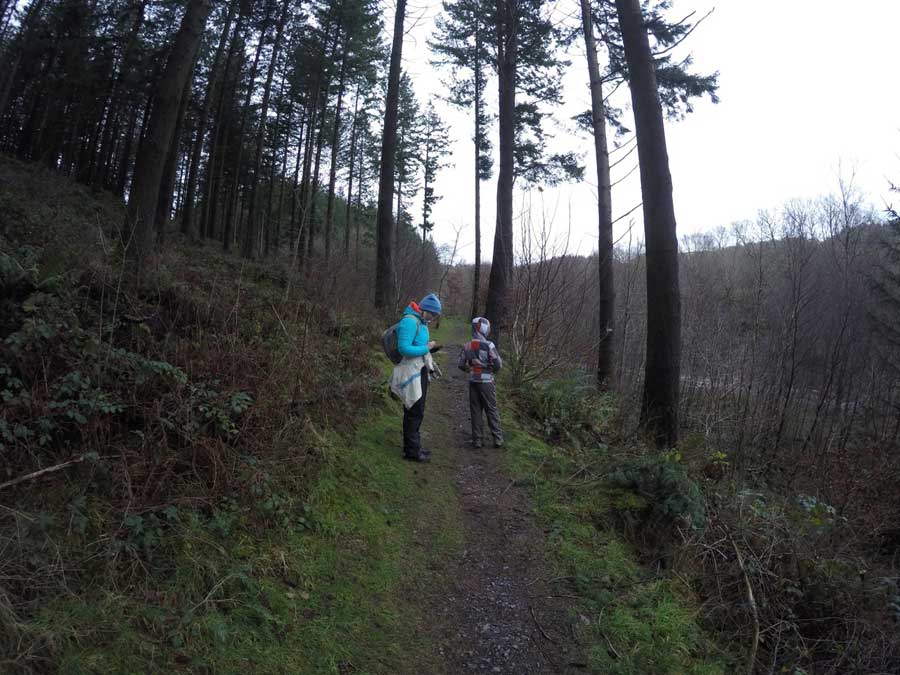 Looking for a geocache

Morgan has at least got over his tantrum by now and was talking to us and helping to look for the geocaches.

We’d never really explored the Hafod Estate before, only ever coming here for specific things rather than a walk and some geocaching. It’s had quite a lot of work done on it over the past few years and many of it’s walks have been restored so that we can enjoy them as they were when it was a Georgian estate.

The most celebrated owner of the Hafod Estate, Thomas Johnes (1748-1816), built a new house in this remote location and laid out its grounds in a manner suited to displaying its natural beauties in sympathy with the ‘Picturesque principles’ fashionable at the time, with circuit walks allowing the visitor to enjoy a succession of views and experiences. Johnes also used the land for farming, forestry, and gardening, in each case trying out new ideas and experimental methods.

There are now 5 well defined waymarked walks in the Hafod Estate that have been restored and take you to some of the features of this landscape which is full of caverns, cascades and now caches too.

In order to find the geocaches we were after though we couldn’t simply follow one route and therefore had to do a combination of a few. We were mainly on the “Gentleman’s Walk” though, signposted with red arrows, this is the most strenuous of the walks. The start of this walk is 1.6 km from the car park so the first couple of caches we found were on the easier blue and green routes alongside the Ystwyth River through a lovely forested valley. 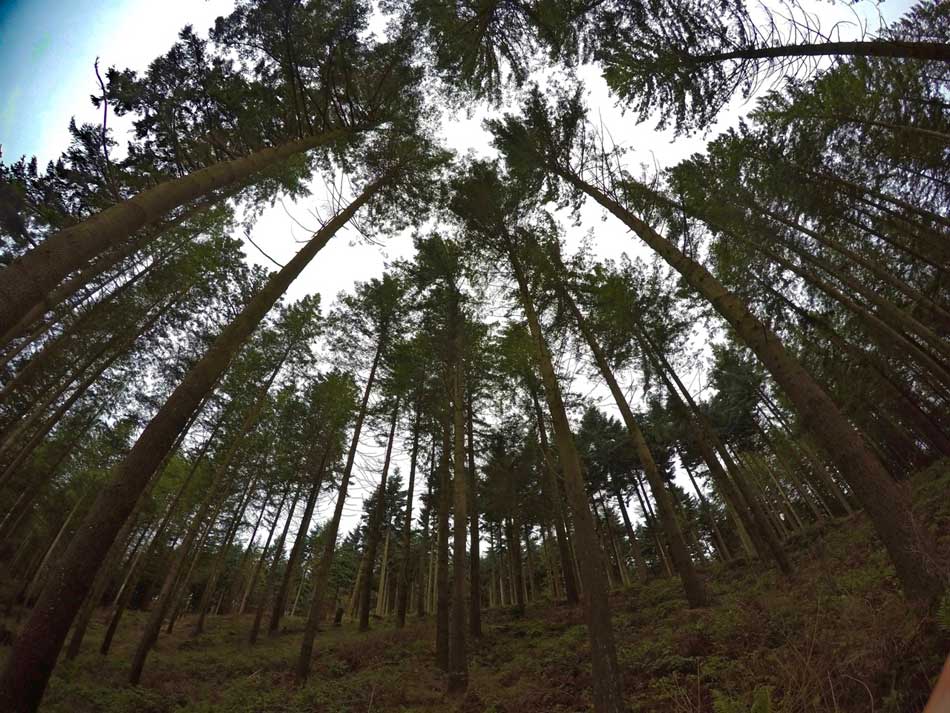 We were unable to find geocache number three though so continued on our way along the muddy riverside. Morgan had cheered up enough now so that we could even have a family selfie together… We need to practice these though so that we don’t all look quite so gormless whilst waiting for the self timer to fire the camera! 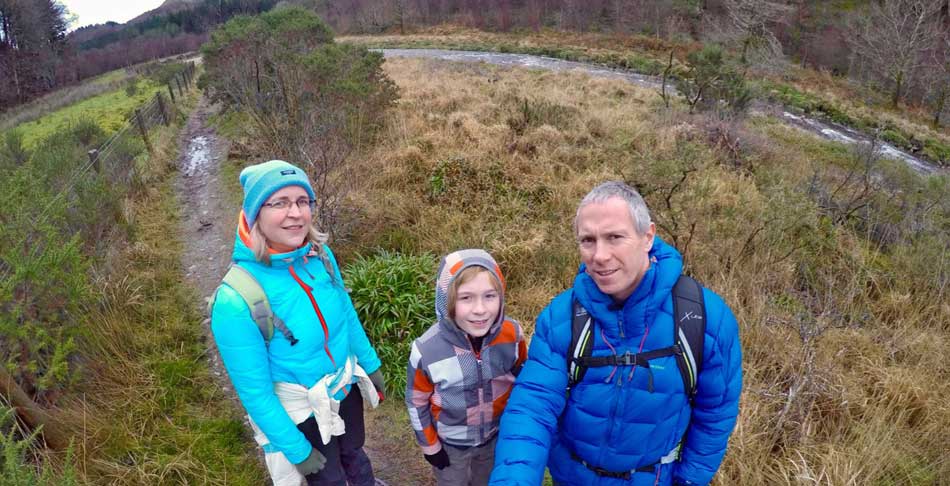 We soon climbed up away from the riverbank to join up with the red signposts and the Gentleman’s Walk. The Gentleman’s Walk was the second celebrated Picturesque circuit created by Johnes. Starting at the Alpine Bridge, it passes through wilder scenery and steeper ground than the other walks at Hafod and has a branch leading to the Cavern Cascade.

Once up away from the river we had some nice views out across the landscape of the Hafod Estate. As we were looking for geocaches though we were following the GPS as well as the waymarked route so took a little shortcut down to the river again and across a wooden bridge to the other side of the river. 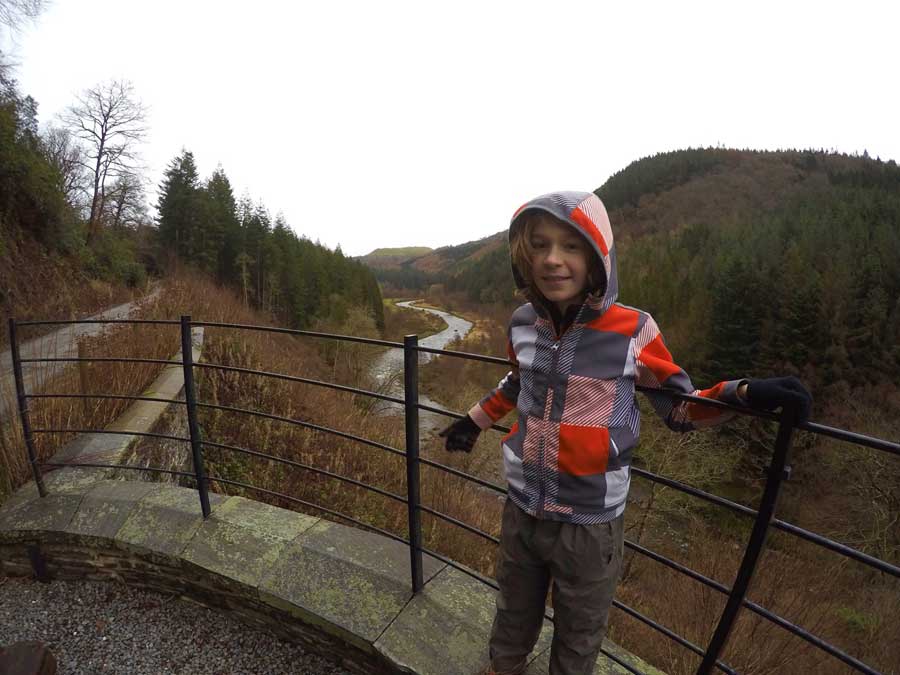 The Gentleman’s route actually turned right here for a loop around and up into the forestry but we went left towards the next geocache, missing out quite a big loop of the walk. We then ended up scrambling up the side of a gorge filled with tumbling cascades and waterfalls to find another cache alongside a little wooden bridge. There were actually a number of these little bridges as we followed the stream up the steep valleyside so there must be lots of other paths along here, but we eventually found the bridge we were looking for, found the geocache and were once again on the Gentleman’s Walk with little red arrows to follow. 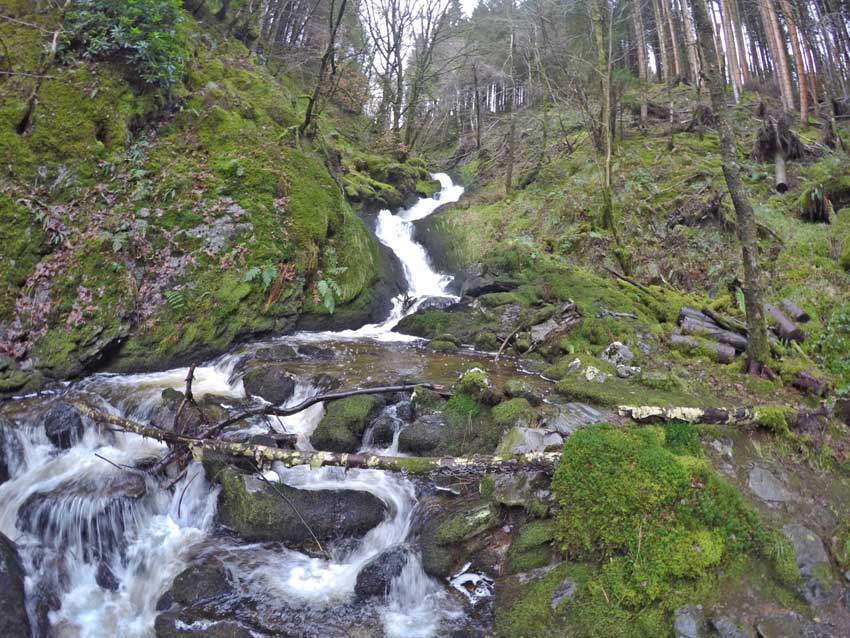 The path became quite interesting now as it clung to the side of the steep-sided valley with steep rocky crags to our right and steep drops to our left. I was a little concerned that it might be a little too high for Anna but she seemed OK with it as we continued on our way taking care not to trip on the roots or slip on the rocks. We then rounded a bend and came to a tunnel entrance. Through we went, and back out the other side as we continued along the path crossing countless streams as we made our way through the densely forested valley. 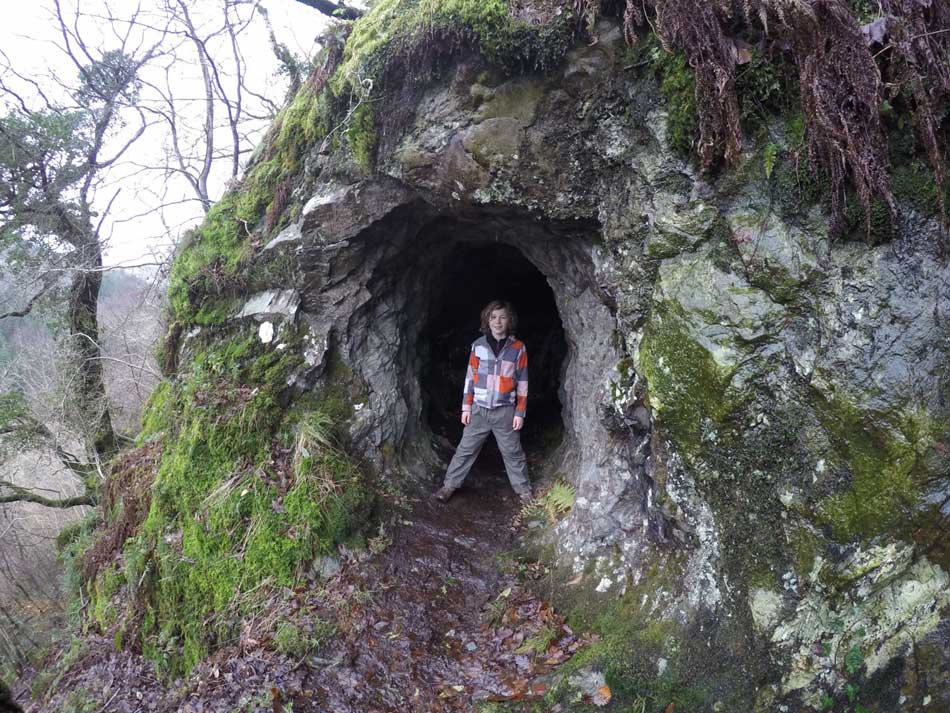 We stopped for a snack, a drink and to put on waterproofs as once again it was now raining. We eventually came to a clearing and had a choice, continue on along the Gentleman’s Route or follow the spur off it towards the Cavern Cascade. The plan had always been to go to the Cavern Cascade as there was a geocache here but I was wondering if Morgan and Anna would be up to it now that we had been walking for a couple of hours already. They were, so off we went, along yet another steep sided gorge full of waterfalls. We passed a mine adit and then continued on up to the end of the path where a cavern greeted us. We clambered up and into it’s gloom and made our way through the drakness. As we did, the thundering sound of a waterfall got ever louder and we were then greeted with the cavern cascade. It was a good job we’d put our waterproofs on earlier as the spray from the waterfall soon had us soaked.

After exploring the cavern cascade, we made our way back out into the daylight, found the nearby geocache which had a few travel bugs in, so we retrieved those and left a nice New Zealand Travel Bug there for someone else to find and then retraced our steps back to the main Gentleman’s Walk.

We then took a bit of a shortcut back towards the car where Anna and Morgan chilled for a bit while I went out for a run. It was still drizzling a little so I got a little chilly getting changed in the car park but I was soon kitted up and headed off first along the yellow way-marked route of the Bedford Monument Walk. I was soon upon the Bedford monument itself but as I was now running didn’t stop to admire the views, but instead continued on and then made my way down the steep sided valley along a few unmarked paths to join up with the blue way-marked path once again. Here I ran along the banks of the Ystwyth River following the path we had taken earlier. Once at the wooden bridge across the ystwyth though I turned right following the Gentleman’s Walk this time doing the full loop at the far end. This took me up out of the valley across some fields and then back onto forest paths. I followed these and the red route, but didn’t head off up onto the narrow, precipitous paths, instead sticking to the wider forest roads.

I was then soon back at the other bridge across the Ystwyth, but rather than cross it I started following the Green way-marked route up yet another lovely valley with torrents of water flowing through it, across the chain bridge and then up a steep hill to the top. This then wound it’s way along another nice wide path, across another bridge and finally made it’s way back down to the bottom of the valley below the car park. One final climb and I was back at the car park after a 45 minute run – exactly what I had planned.

I washed as best I could in the car park with water from a water bottle, got changed and then we headed off to Jo and Danny’s in Pont-rhyd-y-groes. They were in and after a bit of juggling of cars to fit ours on the drive we were sat on their sofa drinking tea, eating the banana muffins we’d taken with us and chatting. Despite the offers of roast dinner we headed off after a while as we had plenty of leftovers that needed eating at home. 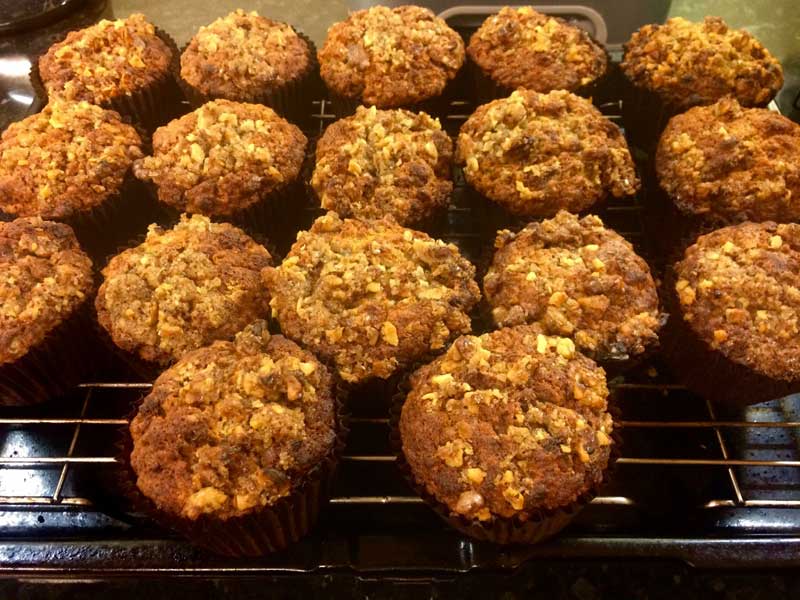 All in all, a good day out exploring the Hafod Estate, a good haul of geocaches, two new geocaching souvenirs, a nice walk, some interesting features and a decent trail run too. Hello 2016!!!