I’ve just got back from running along the Llanrhystud to Aberystwyth Coast Path. Not that unusual for me to be up to such antics I guess but there was a reason for it today. I was recceing the route for the Welsh100o Walk.

The Welsh1000walk is a major event that will circumnavigate Wales including Anglesey raising money for the Alzheimer’s Society (Click here to donate). I found out about this recently and thought it would be a good thing to do with our Scout Group so enquired a little more.

The event will consist of 72 individual walks that will take place on Saturday 16th April 2016. In total over a 1000 people will combine to form a chain walking a distance of 1057 miles. The walks will follow the Welsh coastal path including Anglesey and the historic Offa’s Dyke trail will be used to completely circumnavigate Wales.

The Llanrhystud to Aberystwyth Coast Path

I decided that it would be nice to join a fairly local walk, but not the one from Aberystwyth through Borth to Furnace as we do sections of that route all the time and the whole thing would be too much for many of the Scouts anyway. I therefore though that the Llanrhystud to Aberystwyth Coast Path section would be ideal. It was graded as ‘Moderate’ rather than ‘Challenging’ and would be somewhere a little different to walk. I duly followed the link to sign up so as to make sure we had a place on the walk and before I knew it I was actually signing up to lead the walk. I’m not quite sure how that happened but I’m now the official leader of the Llanrhystud to Aberystwyth Coast Path section of the Welsh1000Walk.

I’m quite looking forward to it actually. Although I know that section of coast well, I haven’t ever walked the whole length of the Llanrhystud to Aberystwyth coast path so decided to do so this weekend. As I was going to be doing it on my own walking it wasn’t enough of a challenge so I decided to run it. Before I did so I did a 90 minute, 30 mile workout on the bike (well, you should warm up before going for a run!). We then all drove down to Llanrhystud. Anna and Morgan left me there to run along the coast path and they drove back into Aberystwyth to do some shopping and to pick me up at the other end. So, off I set, following the Coast Path signs. 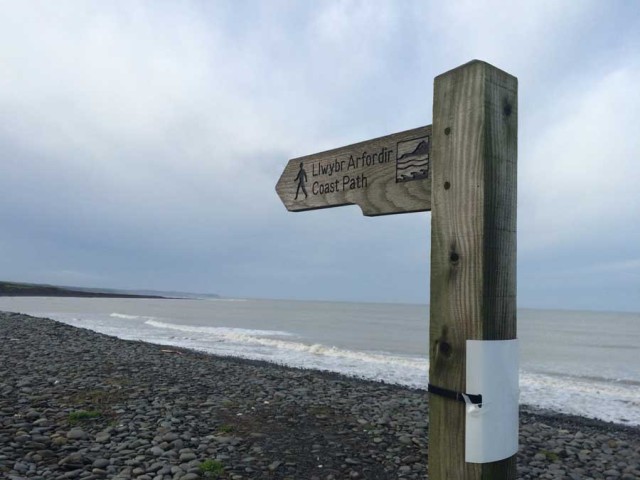 It was never going to be fast as I’m not that fit at the moment.  In addition, the longest run I’ve done since my plantar fasciitis injury last April is 40 minutes or about 5 miles. This was going to be more than twice that in terms of distance and probably 3 times the time so I was going to be fairly conservative with my pace. I was also carrying a rucksack which would slow me down a bit and the ground underfoot was very wet, very muddy and very slippery which wouldn’t help. Oh, there would be some fairly steep hills too!

I started off at a nice easy run. Actually at the pace I was going it can’t be called a run, I’d say it was more of a jog or a trot. Yep, whichever is the slowest out of a jog or a trot, that’s what it was. Once out onto the coast path it was of course quite undulating with the odd steep climb and the even slower steep descents.

As I was only heading North, I was running on a camber that sloped from my right to my left the whole way as well, so my uphill foot and leg seem to have done all the work as they are the ones aching now that I’m home. I’m sure it’s not good for you running any distance on such an camber but there wasn’t much I could do about that. My Innov8 Talon shoes coped quite well with the mud although I was still slip-sliding quite a bit. Not only on the climbs and descents but also on the constant camber on the flats too. I just couldn’t keep me feet from sliding out from under me which made the going tough. 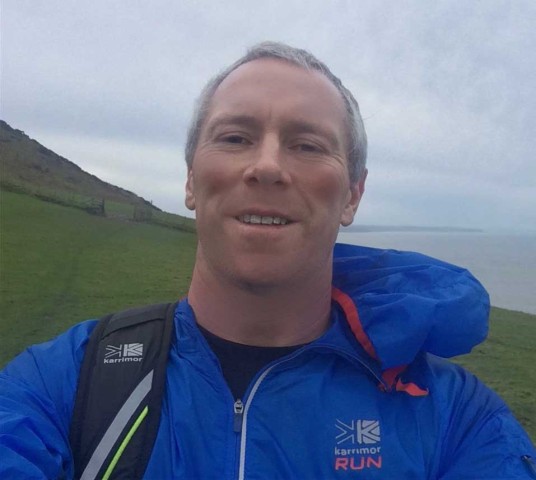 On the few sections where there was less of a camber the ground was just completely sodden so my feet would just sink into it up to my ankles so running through that wasn’t exactly easy either. I plodded on though watching the waves breaking on the shore below. The surf was looking quite good actually. It was a typical grey January day in Ceredigion. It wasn’t raining and although there was some wind it wasn’t too bad so the conditions were fine for running, and despite the greyness, the views along the Ceredigion Coast were still spectacular. 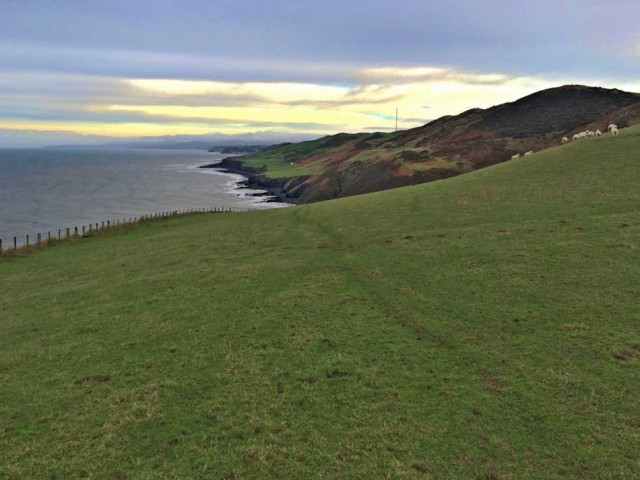 I finally reached the top of Penyblwch and gingerly made my down it’s extremely steep side to the beach of TanyBwlch at the bottom. Just a few hundred yards along the pebbles behind the beach and there were Anna and Morgan sat in the car waiting for me, complete with a spicy chicken and couscous salad for lunch, a vegetable samosa and a chilled caramel latte. Just what I needed.

I had planned to run through Aberystwyth to the bottom of Consti but as I’d already done close to 10 miles which was twice the distance I’ve ran lately I decided that it made more sense to stop here. I’d taken just under two hours to complete the Llanrhystud to Aberystwyth Coast Path. Not fast and I’m sure I could have done it quicker, but I wasn’t out to break records. It wasn’t easy either mind you, but it’s good to have done it. Trouble is, now that I have I’d quite like to run the 71 other walks of the Welsh100Walk as well so that I have single-handedly circumnavigated Wales.