Walking in the Rain in Snowdonia

Walking in the rain in Snowdonia is one thing, but the conditions yesterday were ridiculous!

It was my birthday on Friday so rather than just go out for drinks or a meal, or as we usually do just stay at home and do nothing, I came up with the idea of getting a few friends together and heading out into the hills for a nice long walk, followed by dinner. Such things need to be planned in advance, especially around this time of year when restaurant tables are often booked for Christmas dinners, so it was all organised a few weeks ago. Initially there were 11 of us in total and the plan was for 9 of us to walk up Tryfan on the Saturday after my birthday, walk across the Glyders and come back down into Cwm Idwal before heading off to the Cross Foxes for dinner later in the evening. Anna and Morgan meanwhile were going to do a lower level walk and some geocaching around Llyn Idwal.

With plans in place, as the day approached we turned our gazes to the weather forecasts. They couldn’t quite make up their minds. Was it going to be torrential rain, or just very heavy rain. It kept changing but by Friday they had pretty much made up their minds and settled on the ‘torrential’ rain, and all day long too, coupled with some pretty strong winds. We changed our plans as Tryfan was out of the question in those conditions so the plan was now to walk up through Cwm Idwal to the Devils Kitchen and out onto the Glyders.

We packed our waterproofs and set off into the rain on Saturday morning. A couple of the company had dropped out over the past few days, so it was just the three of us (Me, Anna and Morgan) in our car as we made our way through the wet Welsh roads. The rain steadily got worse as we headed towards Betws y Coed and the roads where becoming a little flooded in places. As we drove out of Betws y Coed and on towards Idwal Cottage it started getting properly wet. It was barely light, absolutely hammering down and the car was being buffeted by the winds.

Walking in the Rain

We met Owain, Bedwyr, Arwel and Ellis at the Car Park, and got ready. The conditions were now so bad that our plans had changed once again. All we were going to do now was the lower-level walk that Anna and Morgan had planned, up into Cwm Idwal and around the lake. At least we could all go together so we set off and were all almost immediately soaked through on our lower halves. Our technical clothing was keeping our upper halves partly dry by the conditions were crazy. As we approached the lake, huge gusts of wind were doing their best, and succeeding in blowing us off the path. I looked back to see how Morgan and Anna were getting on and this was my view. 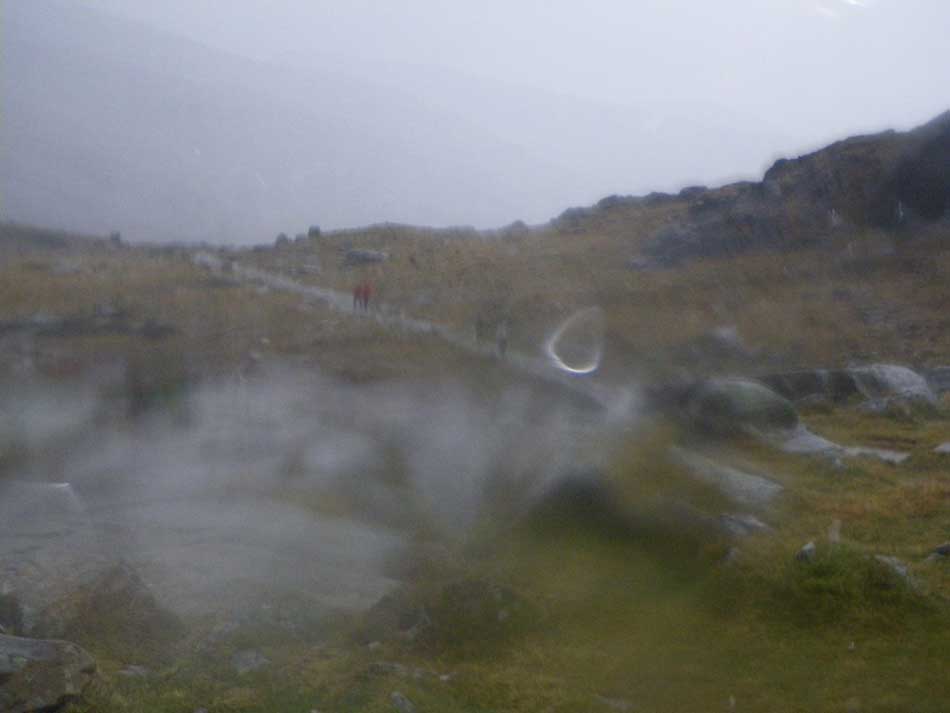 Walking in the Rain

They were walking backwards due to the stinging rain, holding on to each other so as not to get blown away but were still making progress. We waited for them by the lake, but Morgan could barely stand up once there and the wind and spray from the lake was stinging our faces. 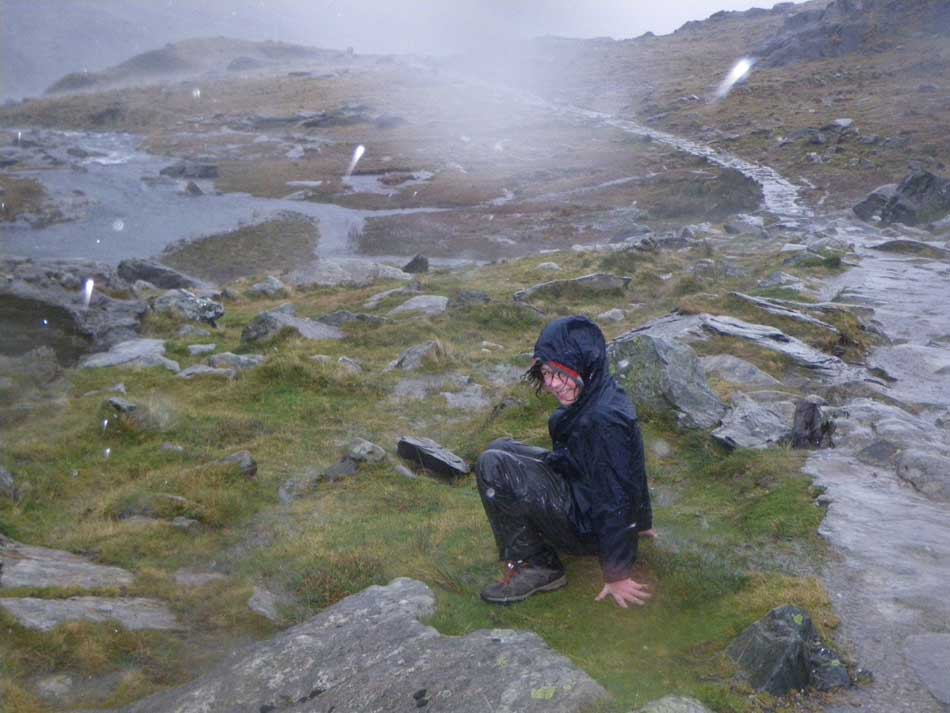 Morgan Walking in the Rain

Walking in the rain is one thing, but this was getting ridiculous so we were all quite glad when Anna and Morgan decided that they were going to head back. I’m all for getting Morgan out into the hills and even out walking in the rain, but it was pretty dangerous even at these low levels today and heading back to the car before he got cold was definitely the best option.

Even for hardy souls [crazy fools] such as us who are quite used to walking in the rain, today wasn’t a day for taking any risks, but despite the conditions we were having fun. 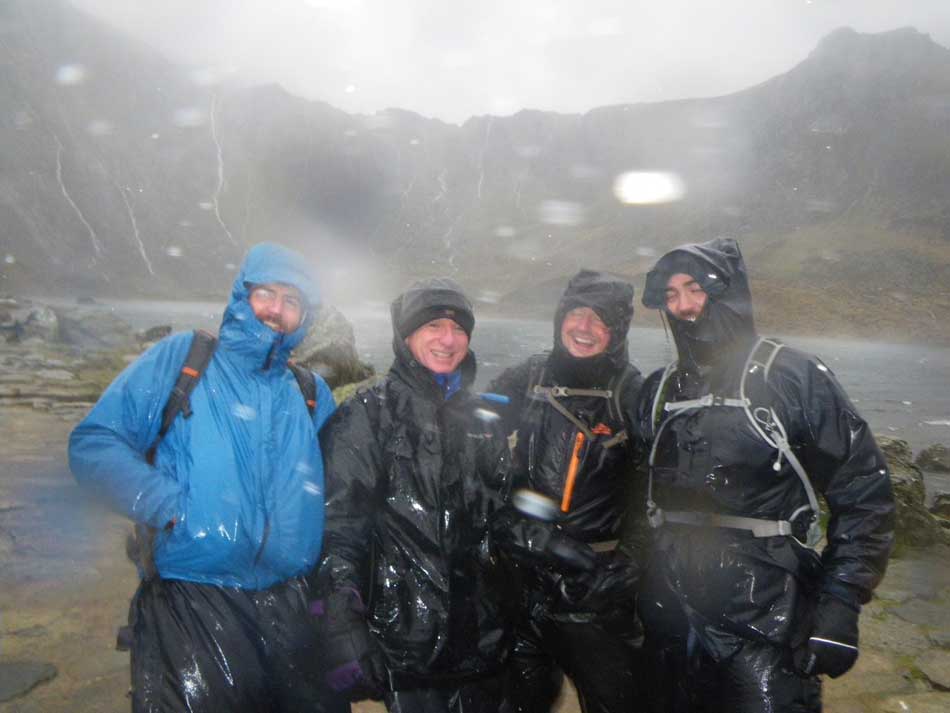 As Anna and Morgan headed back down we continued on into the wind and rain around the lake. Eventually, under Idwal Slabs there was a slight respite from the wind, but even here we were still getting blown around and of course the rain was still hammering down. There were torrents of water cascading down over the cliffs everywhere. The Devils Kitchen was a huge waterfall and eventually our path was blocked by a big waterfall. We could have just crossed it but decided against it. One slip would have had us tumbling down the rocks in its torrents and if we had to come back this way and it got any worse we may not be able to recross it. Instead we made our way back down to the lake and skirted around it where we could cross the stream a little easier to join the path on the other side.

Back out of the shelter of the cliffs and once again staying on the path in the gusts was difficult. Bedwyr was losing his trousers to the wind and everyone was now pretty wet through. We made it back to the far side of the lake and joined the path back down to the car park. By now the stream exiting the lake was a raging torrent and had spilled out over the path which in places was itself a torrent of water. The  water was still rising and anymore than this and the usually simple descent to the car park would have become quite treacherous. We were glad Anna and Morgan had headed back earlier. We made it safely back to the cars though after what had been a fairly slow 3 mile walk. It had only taken 1 ½ hours though, not quite the planned 5-6 hour epic walk in the hills.

We got changed out of our wet clothes and made a run for the cars before heading into Betws y Coed for some retail therapy in Cotswold Outdoor. The roads were now pretty flooded though and my car had decided to spring a leak, soaking my feet once again and filling up my footwell with a pool of water. Our table at Cross Foxes wasn’t booked until 7pm so we now had some time to waste. We did manage to get hold of Dennis and Sophie who were meeting us there and phoned the restaurant so that we could bring the table booking forward to 5:30pm though. So, after a coffee and cake in Betws y Coed and a quick trip back to Cotswold Outdoor we started our drive back south to the Cross Foxes just outside Dolgellau.

The roads were now terrible,with floods everywhere. The rivers around us had all burst their banks, the rain was still falling and the whole of North Wales had become one very wet place. We only just made it through some of the flood waters as reports were coming in of roads behind us being closed. We made it through the gloom and settled down in the sofas in the Cross Foxes waiting for Dennis and Sophie. We were a little worried that they might not make it through, but they did despite the fact that some roads had been closed. Dinner was good and it was nice to catch up with everyone. The walk hadn’t been quite such the social affair that we had planned due to the weather but I guess it was one to remember.

We checked a few rainfall stats and river levels online after dinner and rivers all over North Wales were at some of their highest levels. It had certainly been one very wet day, typical that today would have been the day that we had chosen to go walking in the rain.

We all headed off a little later, vowing to go back and actually walk up Tryfan one day soon. We had to take the long route back as the road we’d usually take was closed but it wasn’t too much of a detour. There were still some floods around and some particularly deep ones between Machynlleth and our house, but once again we got through them and made it home in one piece after what had been quite an adventure in the rain of North Wales.