After a night of pouring rain and no sleep I got up early and had a coffee and breakfast under our new awning. I had planned to take an early morning walk up Ben Lomond but seeing as the weather had been so terrible overnight and I didn’t have all of my proper walking gear with me I decided that it probably wasn’t a good idea. Instead I sat there as the rain eased off, noting that many other tents in the campsite were completed flooded and their inhabitants had given up somewhere in the night and were now all sat in their cars waiting to leave when the campsite gates opened at 7am.

I actually managed to snooze in the chair for a few minutes I think before Anna joined me for a second breakfast. The rain had stopped now and the sun was coming out as we jumped in the car and headed off to Rowardennan at the foot of Ben Lomond. I might not have been able to walk up it this morning so we though we may as well have a look at the foot of it. As elsewhere, the views here out across Loch Lomond were stunning and the weather was now much more suitable for an assualt on the summit so there were lots of walkers about. 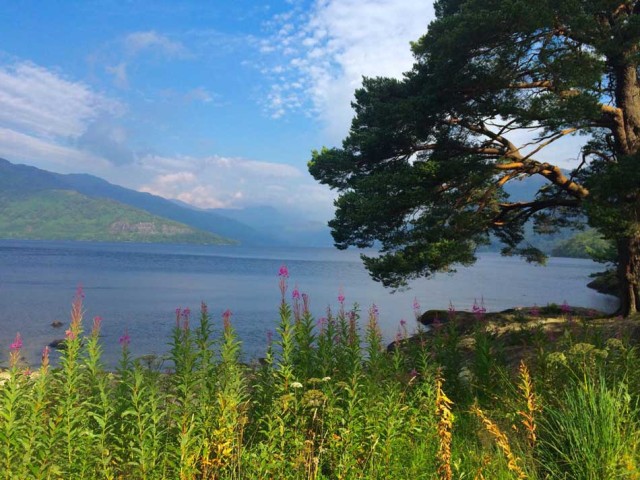 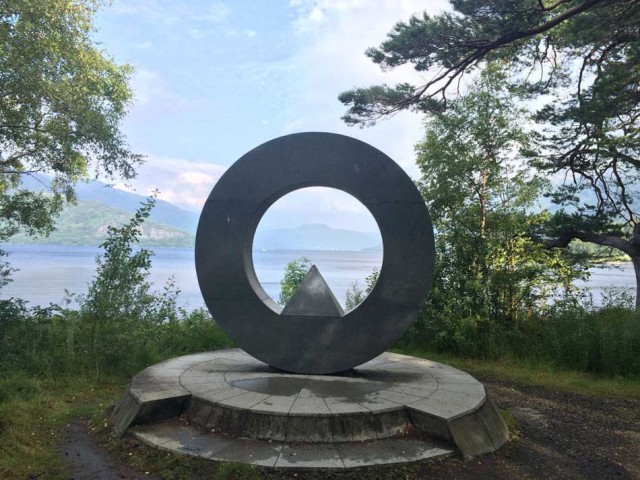 I couldn’t head off up the hill now though as we had made arrangements to have brunch with Cameron and his family and then all head out for a walk.

Queens’ View and The Whangie

In the end the brunch bit was cancelled and we met Cameron, Jackie and Eva at a car park at the base of the Queen’s View and The Whangie. It was now a glorious day, sunny, hot with a gentle breeze. Just right for an easy walk up to the Queens’ View and around to The Whangie. The views weren’t quite as good as they could have been thanks to the haze, but it was a pleasant walk and we stopped at The Whangie to explore the rocks here. The Whangie is a big cleft in the rocks formed by glacial plucking during the ice age and is now a popular climbing spot. 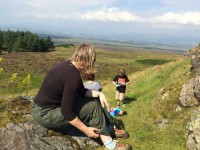 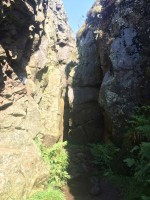 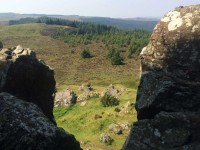 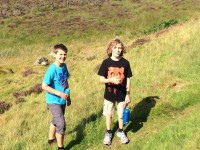 Walking in the hills

Back at the car we said our goodbyes, promised to come back soon and then headed back to the campsite. I was now keen on tackling Ben Lomond and thought I would just about have time.

Ben Lomond – A quick up and down

Ben Lomond is the most southerly of the Munro’s and I was dying to ‘bag it’ but without proper walking kit with me wanted to make sure that the weather would be OK. I also wasn’t sure how long it would take and the guidebooks seemed to suggest anywhere upwards from 5-6 hours for a cicrular walk up the main path to the summit from Rowardennan and back down via Ptarmigan. It took me ages to find somewhere to park so it was just gone 3pm by the time I set off. I didn’t have my walking boots with so so I was wearing trainers, a new pair of heavy cotton shorts I’d bought for work the day before and a ‘T’-shirt. Not exactly ideal but it would do and I did have a free string-strapped bag containing a map, compass, waterproof, spare thermal layer, first aid kit, survival blanket, bottle of water and a flapjack or two. I was hoping not to need any of that, but also didn’t want to be the idiot getting rescued from a mountain without any kit!

Not knowing how long it would take at with only 5 or so hours until sunset I set off at a fir pace, rushing a little to get to the top. Everyone else meanwhile was coming back down so I was dodging hundreds of people as I power-hiked my way up the easy to follow trail. About halfway up I started passing people who were also still on their way up. I asked a couple of they were going to the summit and they said that was the plan, so at least now I knew I wasn’t going to be the last person on hill. I stopped once or twice to take in the view and for a sip of water. 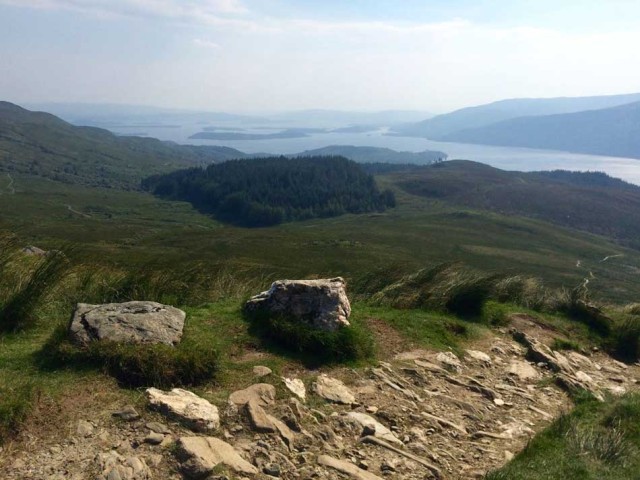 Most of the time I just kept pushing on at a decent pace and finally made the summit after about 90 minutes of hard walking. By now I’d passed plenty of people and had made good time. I decided against doing the geocache here though as it was over what looked to be a fairly steep precipitous slope and it was now blowing an absolute hoolie. Mosty people were on their hands and knees up here just clinging on to the summit. The sun was shining but the wind was howling and up here at 974m it felt quite exposed. 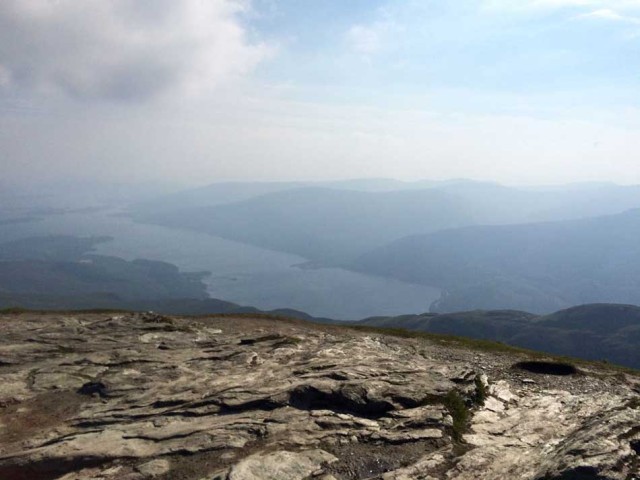 View from the Summit

I started my descent on all fours too, down the steep rocky path north-west from the summit to a col before climbing south-west to Ptarmigan at 731 metres. From here the steep path continues along the ridge with stepping stones over the boggy areas. The views out across Loch Lomond were stunning, but across the top of the ridge I was concentrating more on the path as the wind which was still increasing in strength did its best to blow me off the mountain. It eased further down and once again I over took a few parties descending towards the Loch. I was till going at a fair pace though and finally made it back to the car after a round trip of 3 hours – pretty good going I reckon.

Back at the campsite I had a quick shower, recounted my tales of the Munro and then headed into Balmaha for dinner in the Oak Tree Inn again. A very delicious ‘Ultimate Burger’ for me today. We then had pudding in the tent and settled down for what turned out to be another sleepless night for me, this time thanks to the raging gale.