Geocaching Records on the Kerry Ridgeway

The Kerry Ridgeway – I’d never really heard much about it before and had never been there, but whilst looking for a suitable series of geocaches to find it cropped up in our searches and so an adventure was planned. Once again, geocaching was about to take us to a spectacular part of the country that we had never been to before.

The Kerry Ridgeway is an ancient track that stretches 15 miles from Cider House (south of Newtown) to Bishop’s Castle in Shropshire. According to the notice boards, it takes about 6 hours to walk and can also be followed on horseback or bicycle. We chose the latter, but were stopping every few hundred metres to find a geocache as there are a series of 47 along the trail. The Kerry Ridgeway never dips below 1000 feet above sea level, giving excellent views in all directions.

The Cambrian Mountains are criss-crossed by countless old tracks and routeways, many of which have been abandoned and absorbed into the landscape. Some however remain intact and the Kerry Ridgeway is the most ancient of these that still remain. It’s origins are lost in the mists of time but it is certainly older than the Iron Age and Dark Age earthworks which cut its line.

Our plan was to follow the trail from the beginning at Cider House and end in time for dinner in Bishop’s Castle. That obviously presented a logistical challenge related to getting back again at the end of the day. So I dropped Anna and Morgan off at Cider House and let them start the trail whilst I quickly drove across country to a place called Pantglas, about two thirds of the way along the Kerry Ridgeway where I parked the car, jumped on my bike and made a mad dash back along the ridgeway, uphill, until I met them.

Anna and Morgan would be going slower than me anyway and as they were stopping for geocaches along the way would cover very little ground in comparison to what I could so I wouldn’t miss out on too much of the trail and would get a workout as I sped uphill across the ridgeway towards them. I wasn’t going that hard as my mountain bike wasn’t sounding too healthy having not been used for a while, but I was pushing on at a fair rate. I even managed to get a couple of trophies on strava segments as I tried to concentrate on the trail rather than the amazing views around me – there would be plenty of time for views on the way back.

It was warm and sunny with just a gentle headwind in this direction and a perfect day for the Kerry Ridgeway so there were a few little groups of walkers that I passed, but not that many people considering how perfect it was. It took me about 45 minutes to drive from Cider House to Pantglas and get ready, and then about 40 minutes for me to ride up onto and across the Ridgeway to Anna and Morgan where I found them after riding for about 8 miles. They had covered about 2  miles and were just signing the logbook on geocache number 7.

The geocaching had been going well with 6 finds and one DNF (Did Not Find). Apparently the riding had been quite tough for them though as much of it had been on grass and there was a fairly steep uphill section to start with which they had pushed their bikes up. They were enjoying themselves though and loving the views. 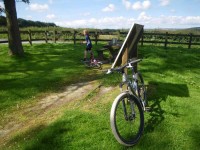 Getting Ready to Go 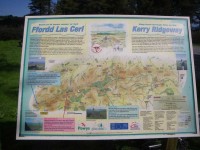 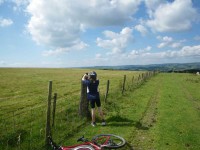 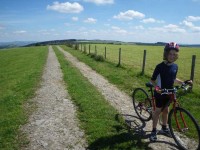 Now that we were together, I could at last slow down and take in some of the views myself, and what views they were as the countryside stretched out around us. I told Anna and Morgan that the going would be easier from now on as it started slowly heading downhill and the trail turned to tracks rather than grass and so on we went. I didn’t tell them about the tricky, rutted, muddy, puddly bit though!

The geocaches were between 0.1 and 0.5 miles apart so there was very little actual riding. We’d just hop on our bikes ride a little way along the trail and then stop and search for a cache. Once found we’d sign the log book, maybe take a photo and log the find in the geocaching app on our phone, and then head off to the next one. 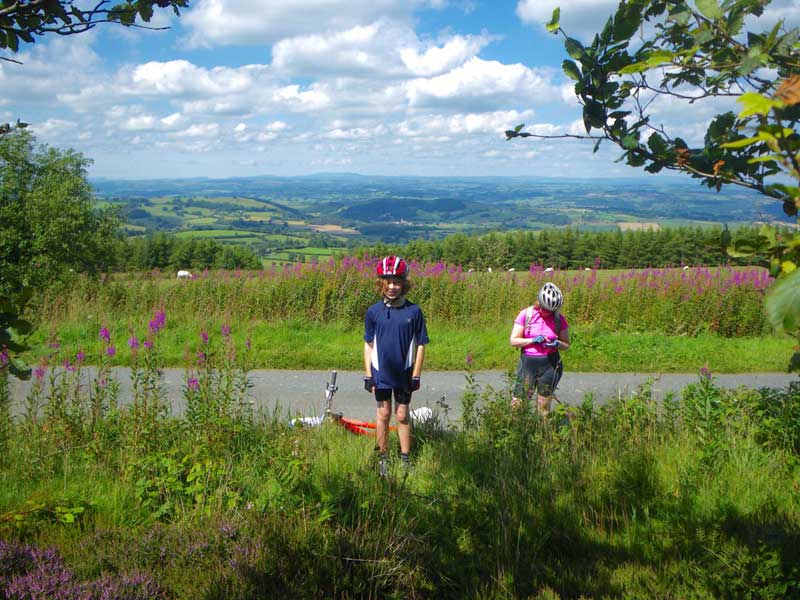 A Cache with a View

The riding itself was the easy part, getting on and off and searching for caches was what made the day tiring. We were doing well though. We skipped a couple of multi-caches as we couldn’t really be bothered with working them out and then entering the coordinates into our phones etc. However, with 47 caches in total along the Kerry Ridgeway we were still hoping to beat our record of 25 geocaches in a day, even if we accounted for some DNF’s and a couple of skipped multi’s. There were also a few geocaches along the way that weren’t in the Kerry Ridgeway Series. We did one or two of these but decided to miss the others out. The route was easy to follow though as it was an almost dead straight line cutting across the top of the ridges, with decent signposts too. 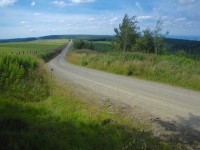 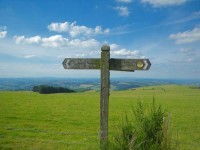 We stopped at Coed Cefngolog for a picnic lunch and then continued on our way. Most of the geocaches were fairly easy to find. One involved some monkey business to get to, which Morgan took no persuading to do, and a couple were in pretty inventive places, but most were fairly similar. 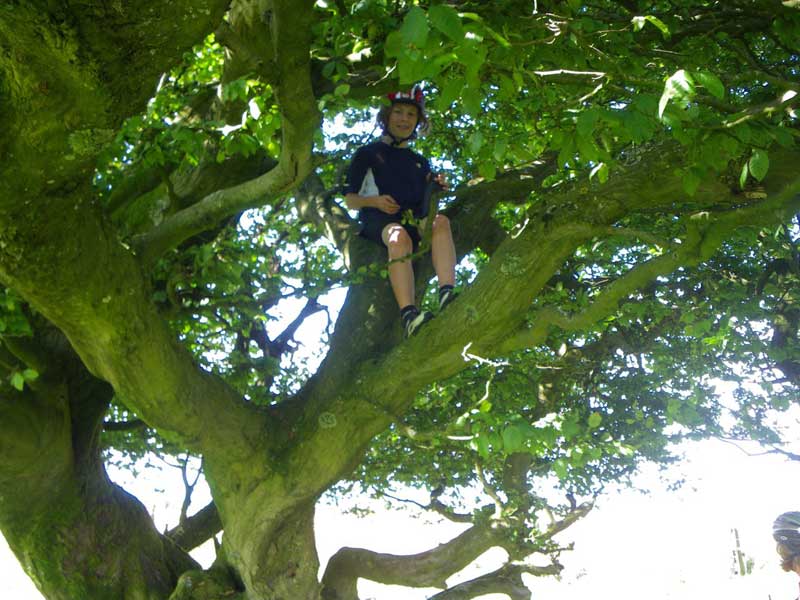 We stopped for a second picnic a little later on and spent most of the day admiring the amazing views. 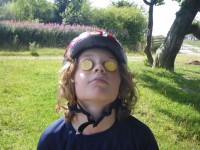 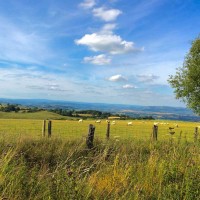 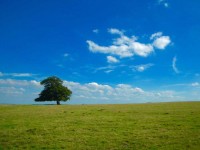 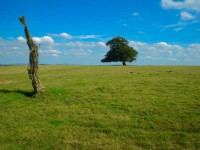 Wide blue skies, green farmland and dusty trails were the order of the day.

One little stretch of the trail was rutted and muddy but most of it was decent, hard packed fire-road or dusty track. We found some beehives up on the heather moorland too, and plenty of trail snacks in the form of bilberries and wild raspberries. 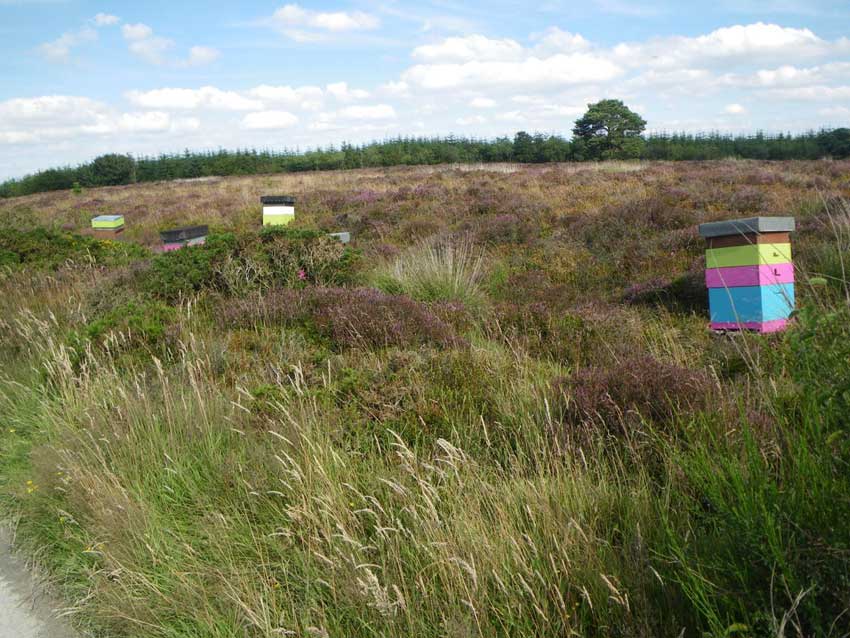 Finally we made it back to the car at Pantglas and onto a tarmac road. We hadn’t quite worked out a plan from here yet, but as everyone was tired, it was downhill all the way now and the geocaches were a little more spaced out, we decided to put the bikes and our bodies in the car and complete the final few caches as drive bys. This meant stopping in the middle of the single lane road, jumping out and scrabbling about in the hedge looking for a little plastic container – such are the joys of geocaching. 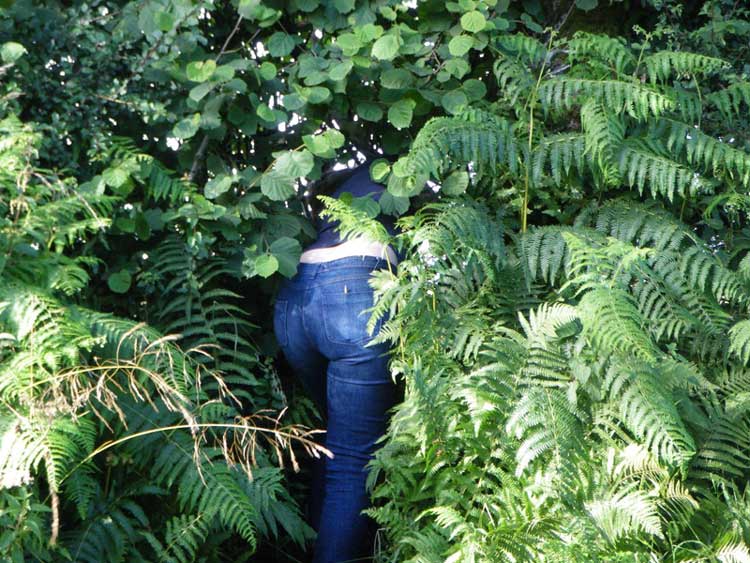 We finally rolled our way into Bishop’s Castle just in time for dinner. There was a final multi-cache to do in Bishop’s Castle, so we found the answers to the clues for this and then headed off to the Boar’s Head for dinner. Whilst we were there we put the coordinates we had found into my phone so that we could find the final geocache afterwards. Dinner was OK, but nothing special and we found the final multicache without any problems. We now have a nice line of smiley faces on the geocaching map marking out the Kerry Ridgeway.

Smiley Faces on the Kerry Ridgeway

In total we found 40 geocaches, a new daily record for us and who knows, with a monthly record of 76 still standing from last August, maybe that will motivate Morgan to get out caching a bit more with us so that we can beat that record this year as well. You can see our full geocaching stats here, but here’s the basics, showing our new daily record of 40 in one day.

As you can see from the map above, there are lots of other geocache series in this lovely part of the world, so we may be back for more one day soon.