A Fresh Lick of Paint

Doesn’t time fly! It’s been over 10 years since we built our house, so about time that we finished off some of the interior decorating! For some reason we’ve just never quite got around to sanding down and varnishing the interior woodwork throughout various parts of the house.

To be fair there are various reasons for this. When we first built the house we were understandably working to a tight budget when it came to interior furnishings and such like, so everything had a quick lick of paint to make it habitable and we put down some relatively cheap carpets and that was that. Since then we have gradually re-decorated various rooms and put down nicer carpets when we have done so. Whilst doing this the woodwork has been sanded and varnished too. The living room, dining room and office have all been done. Morgan’s bedroom, our bedroom and the beach room and conservatory have been too.

The kitchen, bathroom and the ‘loads’ of woodwork in the hall however haven’t. So, whilst Anna and Morgan were away in Cardiff watching the Wales vs Fiji rugby match I set to putting this right. Out came the painting equipment and it was time to don my DIY hat. It took a while to clear all of the tops and surfaces in the kitchen but I soon had a bare shell to start work on. 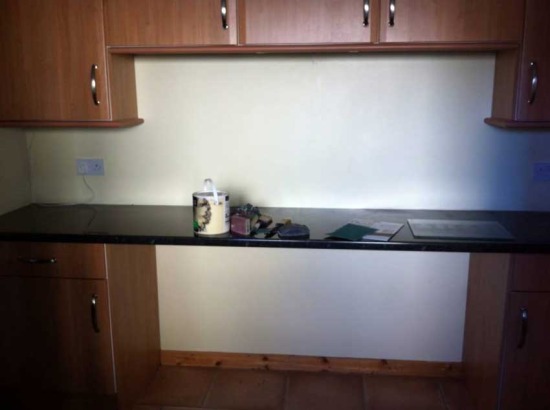 Ready for a Revamp

The first job was the worst of the lot though, the sanding of the woodwork. Thankfully there wasn’t too much of it but it was still warm work and created plenty of dust. I might have to see if I can fix my electric sander or buy a new one ready to tackle the woodwork in the hall. Once I’d cleared up the dust and washed down all the walls and woodwork it was time to cover things up as best I could (the huge dust sheet that I have was in the back of Anna’s car so I had to make do without that), and start on painting the ceiling. This is always the messiest of the jobs so I was soon covered in little specks of white paint, it’s also one of the more difficult as the ceiling was white anyway making it difficult to see what I had and hadn’t painted. I was making good progress though and getting through the chapters of the amazing podcast book Contagious that I was listening to. Just a warning that this is not a ‘book’ for children or those of a nervous disposition, it is very good though.

Once the ceiling was done it was time for a quick coat of varnish on the newly sanded woodwork. I was planning on doing a couple of coats of varnish on the woodwork, so getting one on before doing the walls was a good idea as it was a quick drying varnish so would be recoatable in no time and any little specks of paint that might get on the woodwork whilst painting the walls are easier to remove from varnished wood than bare wood.

As far as the walls go, we had decided to go with a paint called ‘Morning Blossom’, a honey coloured paint that would go nicely with the kitchen tiles but a little brighter than the fairly pale paint we had before. However, whilst getting the decorating tools out of the shed I came across a virtually full pot of a cheerful fairly bright yellow paint that we had used in the beach room and conservatory. Rather than let that go to waste and spend yet more money on a new pot of paint I took the executive decision to use it in the kitchen. I wasn’t sure what Anna would think of it, but if she hated it I could always re-paint it a more suitable colour.

It didn’t take too long to give the walls a first coat and once the paint was on the colour was OK. It was certainly a lot brighter than the we had before, but there’s nothing wrong with a nice bright cheerful kitchen. I had to take doors off cupboards and move the fridge in order to paint all of the walls, but I didn’t bother painting behind the cooker or the dish-washer. No one will ever know – unless of course they read this! 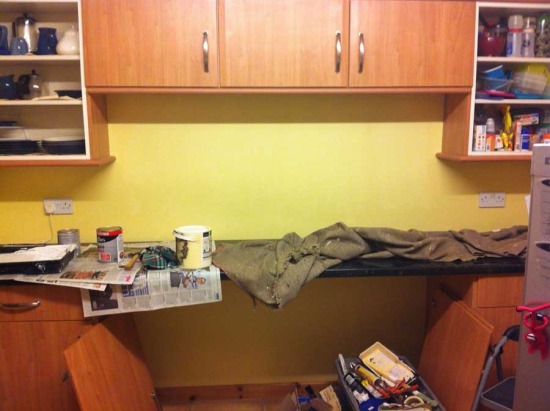 It was then time for a second coat of varnish on the woodwork, a coat of white gloss on the window sill and finally another coat of yellow paint on the walls. It was getting late in the day by now and I’d been painting and decorating non-stop for almost 12 hours. I’d nearly finished though so I started putting doors back on cupboards and moving things back to their positions in the kitchen, I didn’t quite get it done before Anna and Morgan returned home so I stopped when they did and left the final replacing of things until the next day. To be honest we still haven’t quite finished this as the gloss paint on the windowsill took forever to dry properly and needed a second coat anyway, so I’ve just done that this morning.

It’s looking nice in there now. Bright, cheerful and of course tidy which is always good in my books. I doubt if most people would notice the difference, but we know that it’s been done and I’m now feeling motivated to tackle the hall and bathroom too. 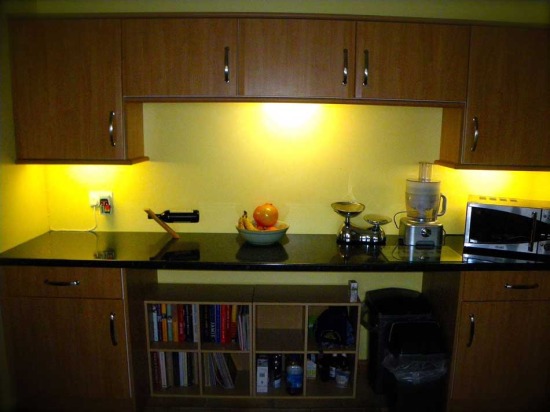